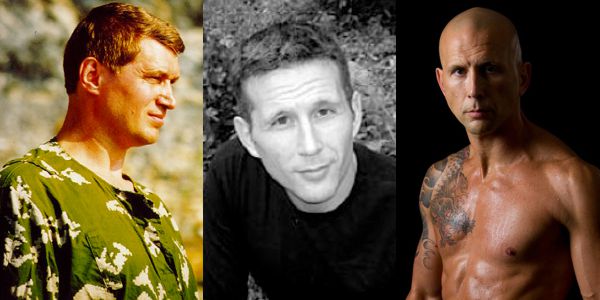 The application of the indicated methods allow for the sufficient preparation of specialists or athletes for hand-to-hand combat in a relatively short span of time, and also for the use of latent reserves of the human being.  ROSS is available for any age and health for people under any condition considering the least time and energy expenditure.  Training is designed to imbed neuromuscular memory and imprint psychophysiology with the basic Survival preparation practiced exclusively by the trainers of the elite combat subdivisions of the Russian Spetsnaz Special Operation Units.

The training is designed to introduce a reeducation of biomechanical awareness and bio-energetic potential critical for the neutralization of even the highest intensity conflict of armed plural-assailant engagements and the rejuvenation and regeneration of the physical wellness and fortitude crucial to survival.

Development through ROSS occurs in 3 Phases:

1.  Biomechanical – The mechanics of the living (Somatic) body, especially of the forces exerted by muscles and gravity on the skeletal structure.
2.  Proprioceptive – The unconscious perception of movement and spatial orientation arising from stimuli within the body itself.
3.  Psychophysiological – The relationship between physiological processes and thoughts, emotions, and behavior.

Each of these Phases as a Trinity of concentration.  The basic level – Biomechanical – involves the reintegration of Breathing, Movement and Alignment.

The PROCESS of ROSS is a totally specific and utterly unique system of Somatic Engineering. NO other system is like ROSS, which is why it is trademarked protected.

Simply stated, ROSS can be understood this way:

Flow State refers to that Psychophysiological mode where the individual maximizes their Optimal Performance (in any aspect of Physical Culture). The level of integration of Biomechanical Efficiency (“Movement”), Structural Alignment (“Structure”), and Respiratory (“Breathing”) Enhancement determines the individual’s State. Fear-Reactivity DIS-integrates Movement, Structure and Breathing.

“Fear-Reactivity” a term coined by Scott Sonnon in his research to refer to those somatic ticks (in breathing, movement, or alignment) that have been conditioned (trained) through fear, anxiety, trauma, (as well as anger, sorrow, etc…) These are defensive mechanisms that involuntarily brace against the perceived threat. After years of sustained bracing, these mechanisms become embedded patterns of behavior, rooted into the individual’s modus operandi.  The longer and stronger the disintegration, the more difficult and more arduous the DECONDITIONING necessary at reclaiming optimal performance – or flow state.

Most people do not even realize the daily, micro-chronic disintegration of Movement, Structure and Breathing, and as a result, they do not understand why over time, as they age, their maximum net performance diminishes in potential. This is NOT due to age, but due to lack of understanding the process of ROSS, and due to lack of vigilance in Daily Personal Practice. One cannot compartmentalize the efficiency and the integration of Movement, Structure and Breathing. One cannot expect to maximize one’s duration within flow state during an “intended” physical event such as martial art, while neglecting efficiency and integration in every other aspect and moment of one’s life. That’s oxymoronic. This is why ROSS is a LIFESTYLE SYSTEM, rather than a mere combat style… for the latter is incapable of truly helping the individual recapture and refine their true potential as an individual.

There are those that read this and inappropriately assume this means the individual just chooses to “do anything.” This couldn’t be farther from the truth. Each individual, over time, conditions/trains to have a specific pattern of Fear-Reactivity. Most people believe that they are doing themselves some justice by fortifying their reactivity. Most people do not even realize how dangerously sapped their energy has become. Most people assume that as they continue to age that the reason their maximal performance diminishes is because they age, when it is THEIR SPECIFIC TRAINING HAS LED TO PERPETUAL CANNIBALIZATION OF THEIR POTENTIAL . . . They condition themselves into strengthening their Fear-Reactivity . . . and they do this every moment in their lives that they experience any stressor, until… life itself, every moment, is an experience of stress.

Fear-Reactivity is not merely the cancer of performance, it is the cancer of life itself. ROSS is the System of eradicating that cancer, and restoring one’s natural abundant health, and unlocking one’s unlimited potential.

ROSS is the SYSTEM of returning authority to the individual through becoming aware of one’s unique pattern of Fear-Reactivity, and deconditioning that pattern. The Process of Deconditioning Fear-Reactivity is a simultaneous Process of Revealing Natural Talent. Through ROSS, one deconditions Fear-Reactivity and as a result one’s true, abundant natural prowess and innate genius manifests. ROSS then continues to refine one’s natural talents and cultivate one’s personal genius. (From www.amerross.com).

What Does It Mean To Be A Martial Arts Teacher

The Hidden Meaning of The Principle of Flow

What is your desired outcome?

Dave Kovar - May 23, 2014
We use cookies to ensure that we give you the best experience on our website. If you continue to use this site we will assume that you are happy with it.OkRead more