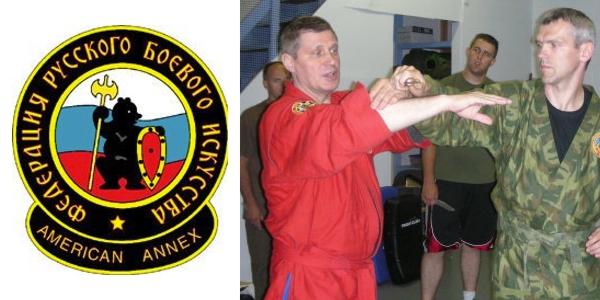 The History of Russian Martial Arts

Russian Martial Art has a martial evolution which can be divided into four periods of influence.

The first period of influence can be considered the period of tribal combat.  Predating the advent of recorded history combative sport and dance were constantly being held, particularly during holidays and celebrations.  The forefather of Russian Martial Art, these skills were passed on from father to son, and comprised tribal rites of passage, from childhood to adulthood.

Between the sixth and tenth century combative sports influenced the connection between tribal combat and hand-to-hand combat skill due to the incessant attacks from the peoples of the North and the West.  A scholar by the name of Prokopiy Caesarean noted the Eastern Slavs to be fearless fighters, rather skillful in close quarter combat.  During this same period, the Gothic historian, Jordan, also wrote about the Slavs being courageous warriors.

Not unlike the Chinese, who had their own patron saint of the martial art known as Bodhidarma, the Slavs, too, had their patron deity, known as Perun.  Martial contests and games held in his honor, led to the inevitable creation of a Slavic school of martial art.  The effectiveness of this school of combat was proven by the victories of both Mstislav the Daring over Rededia, the prince of the Kosog people, and of Nikita Kozhemiaka over a Hercules of the Pecheneg people.  It is important to note that these sports were conducted without individual competitive success in mind, but for the mutual benefit of the tribe and for celebration.

Also, not unlike Chinese martial art, which were outlawed by the Chinese government during certain periods in history, so too was Russian martial art denounced, this time by religious groups.  Religious prohibition, however, could not uproot the continued development of the Russian martial traditions.  On the contrary, it was during religious holidays that brave warriors continued to compete in “Wall-fighting” on the ice, Russian fisticuffs, stick fighting, and other weapons skill.

The second influential period in the evolution of Russian Martial Art, known as the Norman period existed from the ninth to the thirteenth century.  This period, with the refinement of metallurgy, saw many developments in the Russian martial traditions.  Warriors adopted the use of the kolchuga (mail shirt) for body armor, the myech (long straight sword), the ‘shlem’ (round, hemispherical iron cap) as helmet, and the long, almond shaped “kite” shield.  The evolution that occurred during this period was a direct result of enemy attacks from the Western and Northern peoples.  The need to adapt to this particular threat demanded the creation of flexible martial tactics, both in preparation and in application.

With the third period of influence beginning in the thirteenth century, the influential exposure to an Eastern, Mongol and Tatar influenced style of weaponry began to take form. During this time sabre, the Cossack Shashka (long sword that is halfway between a 17th century saber and a 14th century shamshir [scimitar]), round shields, and eastern style body armor appeared in general use.  A special Cossack weapon was also developed that is terribly lethal against the Eastern threat:  the Nagaika (lead-filled short whip).  The influence is most certainly the result of confrontations between the Cossacks (the semi-nomadic frontier warriors of Russia) and Ghengis Khan and his Golden Horde.  The four hundred-year occupation of Russia by the Horde had tremendous impact on the evolution of Slavic martial traditions.

It must be understood that this was an evolution, not an adoption or internalization of foreign doctrines, which took place during the occupation.  For example, the Slavic word, “yar”, signified life’s strength and its manifestation.  Considering themselves descendants of Dazhdbog, the god of sunlight, they lived by a solar calendar and in combat they used their “yar” strength or energy, which was manifested in their solar plexus.  In eastern martial traditions, internal energy or chi has its own focal point, which is located in the lower portion of the stomach, the dantien.   Human biorhythms also followed the lunar cycles.  However, this coexistence led to the eventual understanding of the enemy.  To defend against an enemy, one must know one’s enemy.  Much was learned from this period of occupation.

At the beginning of the seventeenth century the third period saw the gradual introduction of Western influences, conversely the influence of the Oriental styles slowly diminished.  The continuing refinement of firearms inevitably led to the exclusivity of Russian Martial Art.  The case being that it is much easier to teach someone how to fire a pistol, than it is to teach him how to be proficient with autokinetic movement (human biomechanics); the psychological leverage needed to kill a man with a firearm is significantly smaller than that needed to skewer a man face-to-face.  Firearms became very popular because they permitted “instant soldiers”.  At this point, skills began to be taught exclusively by old families that remained true to the heritage of ancient Slavic martial traditions.

It is interesting to note that in Western Europe, Musketeers were distinguished and separated from spearmen, which resulted in significant disadvantages during battle; one warrior had only a defensive weapon or only an offensive weapon.  For the Russian Martial Artist, whose training is based on natural movement, any weapon could be employed for any melee objective.  This period served to fortify the exclusivity of Russian Martial Art.

Besides firearms, the Russian Martial Artist possessed an array of diverse weapons; the latter ones, respectfully called “honest weapons,” were preferred over firearms.  As Suvorov’s old saying goes, “The bullet is for the fool, the bayonet for the good guys,” and reflected one of the important tactical goals of combat – movement which quickly transfers to the venue of hand-to-hand combat, where the Russian Martial Artist possessed a marked advantage.

The fourth and final period of influence, known as the Global period, begins this century with the advent of the October Revolution and the introduction of the Bolshevik regime.  During their regime, they attempted to repress all nationalistic martial traditions of native lineage.  The result of this was the creation of a group assembled by Stalin to develop a combat system and national sport that would unite the Soviet State under one combative tradition and one national sport.  The sport was Sambo.  Due to the influence of foreign “tricks”, Sambo soon became a mere curriculum of techniques lacking any high degree of depth and substance.  At higher levels within the military, among the elite combat subdivisions of the Special Forces (“Spetsnaz”), Russian Martial Art remained in practice and was further developed as a science of biomechanics and psychophysiology (“Survival under extreme conditions referred to as Combat Sambo Spetsnaz.

The Global period of influence dealt with the nature of combat during this century.  Therefore, weapons adopted by the Russian Martial Artist included bayonet-equipped AK47 machine gun, the earlier SKS rifle, even earlier carbine, the spetsnozh (special forces knife/bayonet), entrenching tools (shovels), throwing knives, batons, military belts (used as whips and immobilizing shackles), pistols, sword (European sabre and Cossack shashqa), axe.  The many wars and battles of this century are a horrific testimony to the effectiveness and longevity of the Russian Martial Art; its vanguards, the trainers and elite operatives of the Russian Special Forces, waged campaign after campaign with epochal success.

This period of influence eventually evolved, once again, with the dissolution of the Soviet Union into a form of community-based empowerment and a rejuvenation cultural heritage and pride.

Seventeen All-Russian Annexes including Ukraine (Boris Shapovalov, President) and Byelorus (Alexander Kistin, President) now exist. The first non-Russian instructor, Scott Sonnon, was inducted into this heritage in the hopes of propagating this Global period of influence and its Vision. Annexes in the United Kingdom (presided over by the esteemed Matthew Clempner, President) and Holland (presided over by the esteemed Do Boersma, President) have joined the ranks of the international affiliates and were formed in the same hope of introducing Slavic martial traditions abroad. The legacy of ROSS worldwide is gaining potency as the message spreads.

Building On a Preexisting Foundation