Scott Sonnon is a world champion martial art expert, fitness coach, and wellness speaker. He has worked with movie stars such as Peta Wilson and Donna Karan as well as Ultimate Fighting Championship mixed martial arts fighters such as Alberto Crane, Jorge Rivera, Andrei Arlovski, and Elvis Sinosic. His fitness system, Circular Strength Training, has been adopted by members of the United States military and law enforcement community. He is also a published author, a public speaker, and an advocate in the fight against childhood obesity. 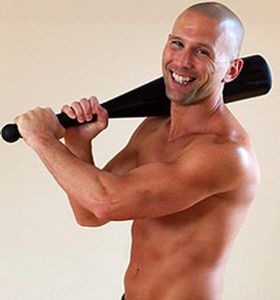 Sonnon was born in 1969, in Pennsylvania, USA. His family emigrated to the United States two generations before him from the town of Sonnon, district of Passau, Bavaria, Germany. He overcame being legally blind due to myopia and Thygeson’s disease, spending his youth in pain with Osteochondrosis and obesity, and suffering learning disabilities such as dyslexia. Sonnon is a member of Mensa International and has been a keynote speaker for the High IQ organization.

Sonnon is credited as having reintroduced Indian clubs in the form of clubbells to strength training. By 2007 he had been inducted into three halls of fame: the National Fitness Hall of Fame, the International Martial Arts Hall of Fameand the Personal Trainer Hall of Fame, and is known to the Sambo and Russian martial arts communities. He is so highly regarded in Sambo training that people have been known to fly thousands of miles in order to attend one of his workshops.