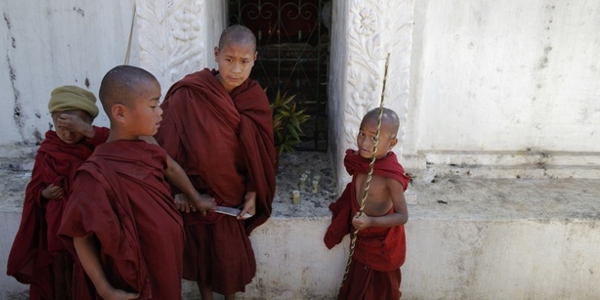 The young Shan monk told me that the first time he came to Thailand he came illegally, to study Pali, the ancient Buddhist script. That was when he was a novice of fourteen. Now, ten years later, he is still studying Theravada Buddhism at one of the temples in Northern Thailand. “I had problems with immigration authorities, and had to return to Burma.” So far, the story was a typical one. Many Shan young men come across the border, seeing Thailand’s many Wats as their only opportunity to obtain an education, which would be denied them in their home country. When they are deported they either remain in Burma, suffering, or sneak back over the border, finding what work they can, until they are discovered again. Prah (I promised not to use his real name or say the name of his temple.), Prah, on the other hand, had luck. After returning to Burma he was able to obtain a Burmese passport, and reenter Thailand on a legal student visa.

The undocumented hill tribes living inside of Thailand are, by and large, undocumented, stateless people. The Shan living in Burma, on the other hand, are technically legal citizens of Burma and entitled to the full rights of citizenship, including a passport. For most Shan, however, these rights exits only on paper. Inside of Shanland, the SPDC wages a war of terror against the civilian population. Most Shan are extremely poor and could never afford the fees and bribes necessary to obtain a passport.

Even if they had the money, getting a passport would mean registering at the police department and filing out government paper work which could only serve to bring unwarranted attention on themselves and their families.

“There are two types of Shan crossing into Thailand.” Explained Prah.

“Some have passports. Some don’t. Most don’t have a passport. They are here for work or escaping the war. But for people without a passport the government only gives them a limited ID card with one address and one job, and they cannot travel or change.”

“Most people who live here a long time are Tai Yai and get Thai citizenship they already have family here they escaped from the war. Tai Yai are not Burmese.”

Tai is the name of the ethnic group which includes the Shan people, the Thai, and the Lao. In Thai, the Shan are referred to as TaiYai, or older brother Tai. Tai languages is about 80% the same as Thai. The cultures are nearly identical and apart from being even more attractive, the Shan look very close to the Thai, and have NO connection to the ethnic Burmas who control their home country. As a result, Shan people have been populating northern Thailand for centuries. Those who are in their second or third generation are generally citizens. They are politically Thai, but they manage to maintain the unique aspects of their Shan culture through the Shan Buddhist temples. Many of the undocumented Shan have family members who are living legally in Thailand and will often seek out their help in legitimizing their own stay in the Land of Smiles.

“Some of the monks in this temple have a passport, others don’t. They don’t make a passport because it costs a lot of money.” Siad the Prah. He became very sad. His eyes were reaching out to me, willing me to understand the tragedy that is the life of anyone, of any ethnicity, born in Burma.

“The Burmese live in poverty. You have to finish high school to get a passport. Novice monks can’t get one, only full Buddhist monks. In September there were problems in the capital, but there have been problems in the tribal areas for decades, especially for the Shan. There isn’t enough education for monks or laypeople in the Shan State. The government doesn’t provide enough education for the minority tribes. For this reason they immigrate illegally into Thailand, in order to make some money for their living.”

“The impact on my family was over a period of years, not just during the protests in September 2007. The Burmese government does not help us. They charge us a lot of taxes, and we can’t afford to live. You harvest rice and the government takes one third of your produce.”

“That’s why there are so many Shan boy and young ladies working as prostitutes in Thailand.”

In the wake of the protests and the subsequent crackdowns which left hundreds dead and thousands missing, rumors flew around the exile community that some of the monks had worked for the military, turning in their fellow monks for arrest and torture.

“Possibly some monks were spies.” Said Prah. The Burmese junta is known for its intense surveillance and control of the Burmese population, which is carried out through an extensive network of chivatos (spies and informants). “The Burmese government is controlling everything.”

“From the past till now, monks had an impact on policy. They influenced the people indirectly. Normally, the monks always got out of the way of government.”

But this time, the monks stood up, and the people followed.

Through a network of friends and family, Prah has information about monasteries in the capital. “I heard that in one temple there were 1500 monks. After the protests, 1,400 of them ran away.”

“While the protests were happening in Burma they didn’t allow Buddhist monks to enter the country because they were afraid they would support the protests.”

The Shan State and Karen State of Burma lay on Thai border. So, undocumented refugees and aid workers cross daily. There is, however only one legal point of entry for tourists or monks with proper visas. You must fly into Yangon. For this reason, it was easy for the government to bar the entry of monks and foreigners during the troubles. As a standing rule, all journalists and any person who has ever publicly spoken out against the regime are banned from legal entry into Burma.

When the SPDC finally falls, it is my dream to see Mandalay and Yangon for the first time, and to walk side by side with my Shan brothers, through the streets of the forbidden cities.

I fear that I shall be very old before that happens.

“I would like to go back when I finish my PHD in religious studies and help to revitalize the Buddhism in my country.” Said Prah, a young man who had dedicated his entire life to study and his entire spiritual power to his wishes for the good of his Shan people.

Prah knew that he could speak openly about Burmese politics, something he would never dare in Burma. And yet, he wouldn’t take a harsh stance against the SPDC. Perhaps it was a Buddhist lesson in compassion and forgiveness.

“I don’t support or oppose any party in the conflict. I just pray that we will have peace and democracy in my country.”