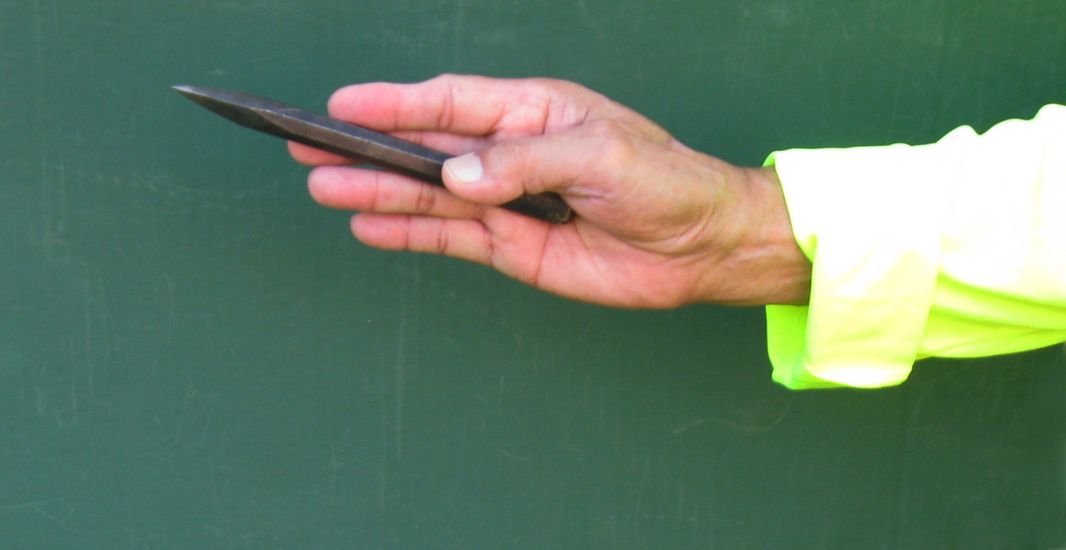 One of the best-known weapons in the martial arts is the shuriken.

The shuriken throwing was thus described: Ichiryu Itto stepped into the room only to find his adversary with a drawn sword. His adversary warned, “If you come any closer, I will cut you with my sword.” Itto stopped about 9 meters (29.5 ft) from the waiting adversary.

Itto said, “I will not come near you but be prepared.” As he was speaking, he drew out two shurikens and took a step forward with one foot. With a vigorous yell, he threw the shurikens, piercing his adversary in the eyes.

There is not much detail on the shuriken throwing except for the distance and the result of the throw. Can we learn more about the throw despite the scant information?

Yes, we can. We would like to know more about the shuriken throwing weapon used, the method of throwing, the grip used on the shuriken, and if the shuriken was thrown with spin or with no spin.

Variables in a Knife Throw
Several variables will determine whether or not the shuriken thrower will hit the target with the shuriken point first and stop the adversary at the same time. Four of the most important are the grip used, weight of the shuriken, the distance of the throw, and the speed of the throw.

Shuriken throwing weapon – Ichiryu Itto, must have used a spike shuriken. Spike shurikens are long, narrow and typically 6” to 10” long. The most common type has circular cross-sections that can have a diameter of 3/16” or 1/4”. Others are flat 3/16” thick and ¾” wide. Still others such as the negishi-ryu shuriken are made from ½” square cross-section steel bars.

The easiest to make, the type used by the shirai-ryu school, are the shurikens with round cross-sections. Ichiryu Itto could have used shurikens that have either a square, rectangular, or cylindrical cross-section. However, as long as the shuriken has a uniform cross-section and has heft, it would not matter whether it is square or round. It will throw well.

The only way we could determine the length of the shuriken that Itto used is by trial and error. We will try one length then another until we are able to duplicate the result of his throw.

The overhand throw is a very powerful throw and can be used on light or heavy shurikens. Even a 1-ounce knife can be thrown accurately overhand. On the other hand, for the underhand throw, even a 4-ounce knife is too light.

Hence, it will be reasonable to assume that Ichiryu Itto used the overhand throw (Figure 1A). It is easier to throw a knife overhand if the knife is initially positioned over the right shoulder (for a right handed thrower).

Weight – The shuriken should have enough heft to stick and inflict a deep puncture wound. Even a 4-ounce shuriken is considered light. Most spike shurikens will weigh less than 4 ounces. Light shuriken throwing weapons, even if it hit the adversary, will have limited stopping power. For this reason, the shuriken that Itto used must have been between 7 and 10” long. The longer and heavier the shuriken the easier it will be to throw particularly from long distances.

(To give the reader a feel for the weight of a throwing knife note that a volleyball weighs 9 oz; a baseball, 5-5 ¼ oz. Professional knife throwers throw knives that are as heavy as 16 oz.)

Distance – If you practice shuriken throwing in your backyard, your target will be fixed and you will be throwing from a fixed distance. This is not so in a duel where the distance is not known. Worst, the adversary could move. Hence, the throw must be quick and disguised by some ruse. Itto threw from 28.5 ft.

It is not easy to judge the shuriken throwing distance. It is from between 12 and 15 ft. But from farther away, such as the distance from which Itto threw, it will be a wild guess.

The measurement given in the account is, strangely, exact (as will be proven later). Could Itto have scouted the location of the duel? One would think that he did. He didn’t even bring his sword. If he scouted the location, he would have made some mental note on where to throw from, perhaps a mark on the floor or distance from a door.

Speed of the throw – Throwing as hard as one can, done over an extended period of time, can hurt the shoulder. (Baseball fans know only too well that pitchers do not pitch in every game so they can rest their pitching hand. Some pitchers have career ending shoulder injury.)

Over years of practice, one will develop a feel for the most comfortable speed with which to throw a shuriken. If one throws a shuriken faster than his usual speed, more likely, the shuriken won’t stick. Hitting the target and making contact other than with its point is not that bad. However, the throw is only considered successful if the shuriken hits the target point first.

I determined the speed of my throw using a speed detector to be about 52 mph (76 ft/sec). It is reasonable to assume that Itto threw the shuriken at this speed. One could throw faster but at the expense of accuracy.

Trajectory of a Thrown Shuriken
A shuriken (or any object) that is thrown will spin as it travels the distance toward the target. The spin is imparted to the thrown object by the rotation of the throwing arm about the shoulder joint. The spike (1- or 2-pointed) shuriken can be made to stick to the target when thrown with a half spin (1/2, 1½, and so on), full spin (1, 2, and so on), or no spin depending on the grip.

Itto’s throw
Itto had three options: throw half spin, no spin, or full spin. The no spin throw is particularly effective at close distances, say, 12 ft. Beyond 12 ft, sticking average decreases markedly. Hence, Itto would have thrown the shuriken with either the half spin or full spin.

Itto stopped 9 meters (about 29½’) from his adversary. He took one step forward thus placing his foot in a throwing stance. At the same time, it shortened the distance by at least a foot. Hence, he threw from 28½ feet. Which foot did he step forward with?

Itto would have stepped forward with his left foot if he was right handed. It would not be possible to generate the power needed for a long throw with the right foot forward and throwing with the right hand. If you are right handed and threw the shuriken as you step with your right foot, you could lose your balance as you release the knife.

Also, I was able to make a 7” shuriken throwing it ½ spin from 8’ and 1½ spin from 28’6” the distance from which Itto threw and killed his adversary.

Hence, Itto could have used either a 7” or a 10” shuriken. However, it is reasonable to assume that Itto used a 10” shuriken because it is heavier and thus easier to throw.

Questions
Ichiryu Itto had great confidence in his skill. He did not even bring his sword into what was to be a sword fight. Itto threw from about 28½ feet. He took a lot of chances. However, he was smart. If he missed, he could have made his escape easily with about 28½ feet of head start. One would doubt, however, if he would have run away. He must have had a sword nearby.

A question could be asked. How come Itto’s adversary was not able to avoid getting hit? Two possible answers could be given. Firstly, Itto did not bring his sword. Hence, his adversary felt he was at a safe distance. Secondly, the shurikens got to Itto’s target in 0.38 second. This would seem to give Itto’s adversary time to take evasive action since the normal reaction time is about 0.25 sec.

Apparently 0.38 second was not enough. Itto’s adversary had no idea that his enemy came to a sword fight with a shuriken and caught him by complete surprise. (In modern times, this is like taking a knife to a gunfight.) Itto outsmarted his adversary.

One little detail should not be forgotten. Itto was about 5’4” the same height as the author. If he was taller, say 5’10”, he will have longer throwing arms and had to throw from farther away. And all the shuriken throwing distances will change.

The Staff: A Remarkable Weapon