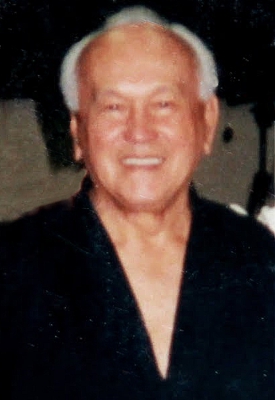 A former quarter miler track star at McKinley High School in Honolulu, and the University of Hawaii, Sig Kufferath was three time Hawaiian A.A.U 440-yard track champion in the late 1920’s and early 30’s. He also worked many years as an auditor for the City and County of Honolulu.

Jujitsu Master
Prof. Sig Kufferath was a Master of the art of Jujitsu. He began his study of Jujitsu under Prof. H.S. Okazaki in 1937. He earned his black belt in 1941 and became an instructor in 1942, where upon he organized his own Jujitsu club Nikko at the Kaheka Lane Judo School in Honolulu.

Under Okazaki, Sig Kufferath studied Chinese stick arts, Kiai, (Internal strength) Karate Jitsu, Nerve arts, Shingen No Maki and Shinyo No Maki (special lists of self-defense arts) and further studied Naihan No Shodan and Kumite (Kenpo Jujitsu Arts). This was in addition to all the kata (standard) arts of Danzan Ryu (Hawaiian School). He graduated from Okazaki’s Nikko Restoration – Sanatorium Seifuku Jitsu (Japanese Physical Therapy) course in 1943. It was customary for a Jujitsu instructor to be well trained in the healing arts too. Prof. Kufferath used to accompany Prof. Okazaki on his house calls to help him treat patients.

In April of 1944, Prof. Sig Kufferath was inducted into the U.S. Amy. After completing basic training he was assigned to Special Services and taught hand-to-hand combat in Hawaii. This came about after he had defeated the current hand-to-hand combat instructor when confronted by him during training. Prof. Sig Kufferath was honorably discharged in 1946; he resumed his Jujitsu Classes at Kaheka Lane School.

Prof. Okazaki appointed Prof. Sig Kufferath Chief Instructor of his main dojo (school) the Kodenkan in 1949. In February of 1948 Okazaki had given the title of Shihan (Master) to Sig Kufferat, via a certificate called “Kaidensho”, or Full Transmission and Mastery”, others also received this certificate. After Okazaki’s death in 1951 Prof. Sig Kufferath was formerly elected by the board of directors of the AJI, (American Jujitsu Institute), founded by Okazaki in 1939, to succeed Okazaki as head and Professor of Danzan Ryu Jujitsu. This became official October 6,1953. In addition to Jujitsu he began practicing Judo and Aikido in the early 1950’s. He earned his black belt in Kodokan Judo (1956) ad Aikido (1965).

In 1957 Prof. Kufferath left Hawaii and the American Jujitsu Institute for California. He settled in The Willow Glen area of San Jose. Prof. Kufferath took a position in the accounting department of Dole Company, working there until retirement in 1976. He continued his teaching of Jujitsu at Pacific Judo Academy in San Jose. In 1960 he began teaching classes at the Los Altos Parks and Recreation Department and founded the Los Altos Akijitsu Dojo (School). He moved his residence to Santa Clara a year later.

Some of the honors bestowed upon Prof. Kufferath over the years include:

International Chinese Kenpo 10th Degree Black Belt – awarded as a testimonial that Prof. Kufferath has set an excellent example to students during courses given. October 8, 1994.

In The Spirit of Aloha

Prof. Sig (Pippet) Kufferath lived his first 46 years in Hawaii and his last 42 years in California. Pippet would go home at least once a year to his native land. He was truly a remarkable man always seeing the good, patient and always training to better himself both physically and spiritually. Pippet once said “The best thing about my Jujitsu career is all of the friends I have made over the years” and these friends will truly miss him.

USAdojo - January 27, 2003
We use cookies to ensure that we give you the best experience on our website. If you continue to use this site we will assume that you are happy with it.OkRead more