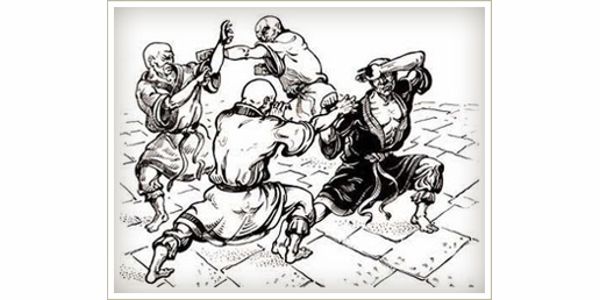 Sil Lum Kung-Fu (or Shaolin Kung-Fu in the Mandarin dialect) is the most well known of the Chinese martial arts. Born in China’s Hebei province on Songshan, the Sil Lum arts were originally a fusion of Indian yogic and martial practices from Kalarippayat and indigenous Chinese fighting techniques that were supposedly developed by watching animals. The patriarch of the Sil Lum temple was an Indian monk, named Da Mo, and his teachings formed the basis of the Ch’an sect of Mahayana Buddhism, which the Japanese would later develop into Zen Buddhism.

Throughout China’s history, the Sil Lum Temple would be a site for controversy. Similar to western Christian traditions, many outlaws, bandits, and subversive elements sought refuge in the holy grounds of the temple, along with career soldiers forgiveness for their killings on the battlefield. In each case, these men with their varied backgrounds brought new techniques, weaponry, and fighting skills into the hallowed walls of Sil Lum Temple, and as the years passed, the curriculum evolved. Many times, the imperial court tried to suppress the temple’s activities, or altogether destroy it, but the temple and its followers always managed to hold on until the Ching Dynasty. The temple was burned down, and some of the elder monks fled south to supposedly create a new Sil Lum temple.

During this era of instability, many new schools of martial art blossomed, each claiming descent from the Sil Lum temple. Northern Sil Lum, Choy Lay Fut, Hung Ga, Wing Chun, Ngor Chor (from Fukien), and Mi Jong Law Hon are just a few of the styles who trace their ancestry to the southern Sil Lum temple. Not too long after the fall of the Ching Dynasty, another great tragedy would befall the Sil Lum Temple, when Chairman Mao Zedong’s Red Guards initiated their Cultural Revolution. During the fearful years of the Cultural Revolution, anyone who didn’t enthusiastically embrace communism or who was caught preserving a traditional way of life was branded as “counter-revolutionary” and either tortured, imprisoned, or killed outright. Many of China’s great martial artists lost their lives during this time, and Sil Lum suffered on two accounts – both as a martial arts training center and as a religious institution.

In the years following the Cultural Revolution, the mainland Chinese government found that the Sil Lum Temple was a popular tourist attraction, and worked to rebuild it, while gradually relaxing religious restrictions. The martial arts curriculum was no longer the original fighting art, however. Contemporary Wushu, a demonstration sport-oriented version of the traditional arts, became the government sanctioned curriculum. The new format allowed the government to promote a standardized form of martial art that could be popularized throughout the world in tournaments and demonstrations. The birthplace of Kung-Fu, the Sil Lum Temple, was not immune to this edict, and the temple had to either change with the times or perish.

Nowadays, the strongholds of Sil Lum martial arts may be found more in the schools of expatriate Chinese, than in the Sil Lum Temple itself. While the temple undoubtedly still harbors a few old dragons within its walls, the majority of the monks there lack the same understanding of the original fighting arts as their pre-Cultural Revolution predecessors did. During China’s Communist Revolution, many Chinese fled to neighboring areas, such as Hong Kong, Macao, Malaysia, Korea, the Philippines, Hawai’i, and the United States. Because of this diaspora, many Chinatowns sprang up around the world, and inevitably there’d be one or two accomplished martial art masters who would begin teaching a hand-picked group of students.

One such master was Lum Tai-Yong, a priest who fled his home in southern China for Hawai’i in the early part of the 20th century. He was well versed in the art of Sil Lum Fut Ga (Shaolin Buddha style) and the healing arts as well. Highly regarded as a spiritual master and expert martial artist, Lum was respected as a Sun Kung Sifu (master with supernatural powers). His system of Sil Lum Fut Ga was born of the kind of legend that makes Chinese martial history so colorful and inspiring.
It is said that Fut Ga was created by five monks in the southern Sil Lum Temple who mastered the five Ga, or family styles, which were taught in the temple – Choy Ga, Hung Ga, Lau Ga, Lee Ga, and Mok Ga. The best techniques from each of those styles was:

The nine original weapons are the staff, spear, straight sword, broadsword, butterfly swords, kwan do, tiger fork, three-sectional staff, and the monk’s spade. Taken to create a new hybrid which would become the new standard curriculum for the monastery. Thus, Fut Ga is sometimes called by another name, Ng Dai Ga, which means Five Great Families style in Cantonese.

Lum Tai-Yong’s top student was a young man named Arthur Yau Sung Lee. As a boy, Arthur Lee was stricken with severe asthma, and his parents enrolled him in a Hung Ga class under Professor Lau You-Cho. Professor Lau’s lessons laid the foundation for young Lee, and Lau introduced him to Lum Tai-Yong a few years later. Training diligently under his master, Sifu Arthur Lee grew out of his childhood affliction into a powerful man and noble man. He grew to embody a strong sense of righteousness, dignity, courage, and class. Upon Lum’s passing, he was handed the mantle of leadership to the school christened Gee Yung, which means “go forth, be brave” in Cantonese. The Gee Yung Chinese Physical Culture Institute blossomed slowly until the early 1990’s, when one of Grandmaster Arthur Lee’s students, Andrew K.H. Ching, became active with the Amateur Athletic Union (AAU) Chinese Martial Arts Division in an effort to promote the system to the public and create a larger following for his teacher. Sifu Harlan Lee, the younger son of Grandmaster Arthur Lee, became active around that same time, participating in and winning a string of tournaments and ending up on the covers of Inside Kung-Fu, Martial Arts Training, and Wushu-Kungfu magazines.

Andrew Ching was responsible for introducing a young Mark Cheng to the Lee family in 1991, and spent many hours tutoring him in some of the finer points and lore of the Fut Ga system. Always one to look after Cheng like an older brother would, he often flew Cheng up to the San Francisco Bay area to stay with him and train, many times when Sifu Arthur Lee was in visiting from Hawai’i. In December of 1999, Sifu Harlan Lee and Andrew Ching arranged for Sifu Mark Cheng to make his first pilgrimage to Honolulu and teach intensive Shuai-Chiao and Combat Tai-Chi seminars at the invitation of the Gee Yung Institute.

During his week-long stay, Sifu Cheng was invited to stay at his teacher’s home and spent hours with Grandmaster Arthur Lee and his family. Cheng paid his respects at the grave of Lum Tai-Yong, and spent long hours sharing the Shuai-Chiao system with his Fut Ga brothers and sisters. During one morning while Sifu Arthur Lee was teaching him the Sup Ji Kuen in his living room, he told Cheng to teach the Fut Ga to his student, Fong Sam. This marked the first time that Cheng was given permission to teach the Sil Lum Fut Ga system.

Sifu Cheng continues his training in Sil Lum Fut Ga with the Lee family on their visits to the US mainland and holds an open invitation to train and teach at Gee Yung – Hawaii. He also continues his study with Sifu Rick Der, the chief instructor of Gee Yung – San Francisco.

Courtesy of The Chung-Hua Institute and Sifu Mark Cheng

An Introduction To Wushu or Chinese Martial Arts

USAdojo - March 8, 1999
We use cookies to ensure that we give you the best experience on our website. If you continue to use this site we will assume that you are happy with it.OkRead more