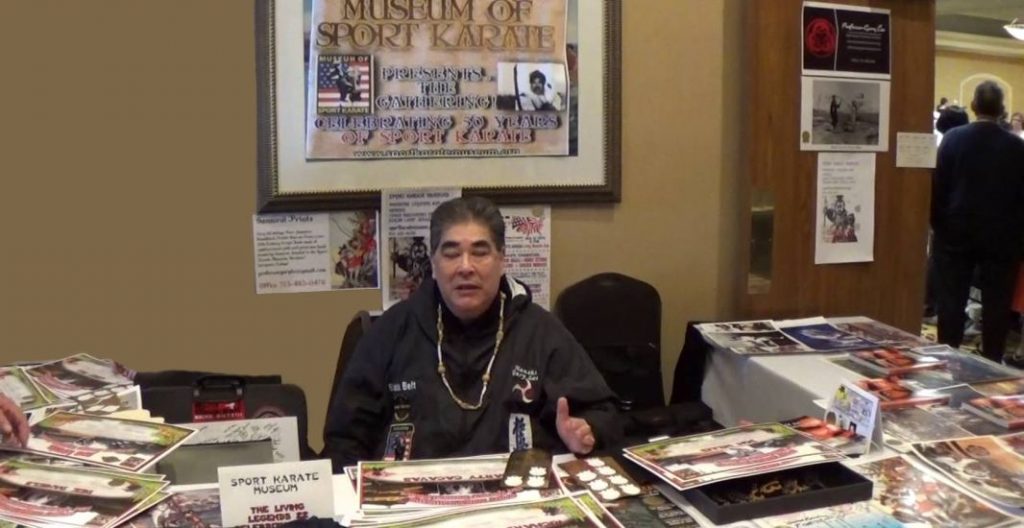 Duane Ethington made a speech about the success of sport karate and the Sport Karate Museum and our desire to save our history.

From the spawning of the very first dojo in America through the britches-busting youthful exuberance of the Texas blood and guts era and into today’s strapping grown-up rambunctious version, Sports Karate has become a rousing success. But how did it arrive at this point and why has it been so successful?

A very few realize that martial arts in America began way back in 1848 with the arrival of the Chinese Coolies who were brought in to work on the railroads. These “imports” secretly practiced versions of Kung Fu.

Then came judo, introduced by Yoshiaki Yamashita in 1902 and Kali in 1907 by Jack Santos. In 1921 America got its first wide-spread exposure to oriental martial arts in a movie called THE OUTSIDE WOMAN. Throughout the years every other aspect of martial arts has been brought to Americas shores.

Closer to home, perhaps, after Mas Oyama traveled in 32 states giving his famous demonstration of chopping the horns off live and charging bulls, Robert Trias became the first documented Caucasian to open a school in America. He opened in Phoenix, Arizona in 1946 and founded the United States Karate Association the next year. Collegiate judo flourished and Edward Kaloudis introduced karate to the east coast about the same time that Ed Parker was bringing Kenpo to Provo, Utah.

Master Trias held the first organized tournament in 1955 and Korean Jhoon Rhee opened shop in San Marcos, Texas. Rhee’s class, which spawned legendary Allen Steen, the father of Texas karate, was probably the beginning of the blood and guts era.

J.Pat Burleson became the first National Karate Champion and Allen Steen made martial arts history by defeating Chuck Norris and Joe Lewis, back to back at Ed Parkers International tournament in 1966. It was a feat never before accomplished.

Fighters, though, weren’t the only ones to make their marks and perpetuate this ever-growing, strapping youth known as Sport Karate. Magazine editors, writers and promoters all had a hand in making the sport an elite entity. Mito Uyhara, Howard Hanson, Renardo Barden, Al Weiss, John Corcoran, Mike Anderson, Emile Farkas, Duane Ethington, Gary Lee, Fumio Demura, Keith Yates, Curtis Wong, Ken Knudson and many others kept the sport growing and in the public eye.

Now here we are. A big, strapping, much admired, talented and here-forever young stalwart who is just about to get our own History Museum and Library and take our rightful place in the world of sports forever more.

From the top of the workhorse chain – the Gary Lee’s and Shawn Flanagans’ – to all the countless people who contributed what they could here and there, American Sport Karate could not and would not BE without you.

A heartfelt thank you and OSU.
Duane Ethington

Teaching Seniors To Fight Back