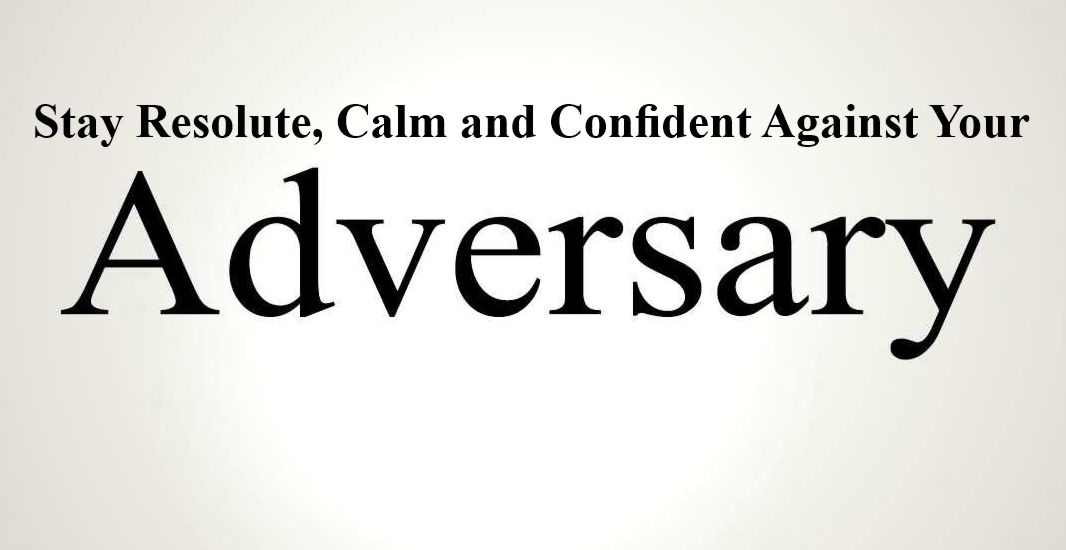 It has been my experience in life that, with a few notable exceptions, whenever a bully is confronted with a resolute calm, confident adversary, he will usually back down. It does not work every time, but it has proved to be, in my experience anyway, generally true.

I noticed a while back a commented on the necessity of being “at peace with oneself” as a prerequisite for being a “warrior”. It got me thinking about my own experience.

“Where does this ‘peace’ or ‘calm’ come from?” The answer to that varies, most likely, from one person to the next. For me, a large part of it comes from my Christian faith. From the knowledge, certainly common to devout followers of other faiths, as well, that God is my first and most important line of defense. Yet, our martial arts training is also a large part of this peace and calm. It comes from a certain knowledge that we are better-equipped than most to meet trouble when it comes our way, even when unarmed, if that becomes necessary. This is not a cocky, or arrogant sense of peace, or calm, but rather a quiet assurance based upon many hours and even years of preparation and training and hardening ourselves to the harsh realities of a sometimes suddenly violent and dangerous world.

My Sensei in recent years has been the legendary Grand Master Donald Miskel, who writes frequently for USAdojo.com. One of the best things he ever did for me in my training was a seemingly little thing—but little things often lead to big consequences as the great UCLA mens’ basketball coach, John Wooden, liked to say. The “little thing” Sensei did for me was to KICK me whenever I went to the ground and took (in HIS opinion) too long to get back up— pointing out (rather gleefully, I might add) that, “on the street, no attacker is gonna’ let you get back up at YOUR leisure.” And he’s right. I learned to get right back up quickly, EVERY time I hit the ground. And to expect a kick to be coming, anyway, no matter how soon I tried to regain my feet. (And by the way, when you are the Sensei, and are training someone, YOUR opinion about anything pertinent to training is the one that really counts.)

In my daily work as a security guard, whether it was at the hospital where I was once head of security, or in other venues such as the retail center where I now work, alone, all day six days a week, I sometimes must confront someone younger, bigger and more powerful than me. Sometimes it is a minor thing at issue. Sometimes it is a domestic violence situation. Or an irate customer threatening a clerk or manager with bodily harm. Or an angry family member, distraught about poor care. And sometimes the people I come into contact with at such times either overtly threaten me, or, as I deal with them, I “can see the wheels turning” as the individual in question is sizing me up to maybe take a poke at me. It would be easy to become frightened and intimidated at these times. And fear, by itself, can be a healthy thing. But it is also important to stay “in control” of the situation” at these times. And you cannot do that if you are trembling, or if your voice is quivering or if you are “showing” any fear at all. It is important to maintain eye contact, to speak clearly and evenly, and directly to the point, and yet with some degree of tact and, yes, even grace. And if you can do these things, and do them with a peacefulness and calm within you that “projects” itself outwardly to the person(s) you are dealing with, even the most belligerent and bellicose potential adversaries will usually think twice about escalating things further. Because they sense no fear in you. They sense a peace and a calm that they did not originally expect to find in you when things began to take an ugly turn. And that gets THEM to thinking, “Why is this person NOT afraid of me? Does he know something? Or is he just nuts? Well, he’s not frothing at the mouth, so I don’t think he’s nuts. Do I really want to find out?” More often than not, though they may still “posture” and run their mouths for a while (this is just ‘face-saving’ stuff, usually—what I call “part of the dance”), they will usually eventually deescalate and, essentially, “stand down”.

There is nothing wrong with taking so many blows in class that you can eventually go home thinking you are not too beat up from class only to find, as you strip down to shower, that you are bruised and abraided all up and down your torso. This is “conditioning”, not just aerobically, but in a toughening up sense, also. It teaches you that “getting hit” is not the end of the world, and that you can still think and function AFTER getting hit. It is an essential element of training. And it lends a sense of peace and calm to the martial artist that most do not acquire because they have never allowed themselves to be hit and have no idea how to handle it when it happens. This, for me anyway, is how Hanshi Miskel’s recent article about translating the Classroom Dojo to the “Dojo of the Street” takes place.

Peace. Calm. Some have it naturally, possibly. They are, perhaps, few. But most CAN have it. However it is something to be acquired for most people through a process. That process is usually both a physical and a spiritual one. Once you have it—and nothing teaches it better, in my experience, than the martial arts, you will make an interesting discovery over and over again for the rest of your Life; that most bullies and loudmouth braggards are “discombobulated” when they are confronted by a resolute, calm confident adversary. And shrink away. Not all of them. And not all of the time. But, most. And most of the time.

Musashi: An Epic Novel of the Samurai Era