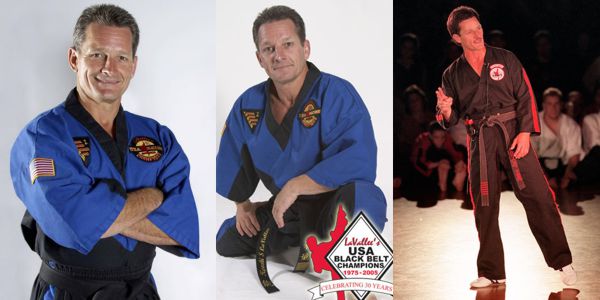 Kyoshi Steve LaVallee, our founder and Chief Master Instructor began his life long quest for excellence in the Martial Arts at 10 years old. By the time he was eighteen, his original Kenpo Karate instructor, Master Lee Thompson, moved to California and Kyoshi officially became the Sensei and owner/operator of his first dojo. In his early years, he dedicated nearly every waking moment to training, traveling, and competing on the Karate Tournament circuit. Winning over 300 awards and titles that eventually lead to him becoming a Top Ranked competitor in forms, weapons and fighting.

He was awarded “Triple Crown” by Karate Illustrated for his competitive victories and soon afterwards began to dedicate his energy to training and coaching his many students that followed in his footsteps and also became Top-Ranked competitors in the tournament arena.

Always seeking greater knowledge and skills to become a more versatile athlete and teacher, he traveled and trained with the best in the World of Full Contact Karate/Kickboxing. Which lead him to World Champions, Bill “Superfoot” Wallace, Joe Lewis and Jeff Smith. He was then influenced to add boxing to his training regimen and he spent the next few years honing his boxing and kickboxing skills, under the guidance of “Hall of Fame” Boxing Coach, Ray Rinaldi.

As he expanded his skills, his talents and titles grew, so did the size and strength of his team. In the mid 1980’s, he began to realize his true passion and talent was teaching and training others. Instead of traveling to compete, here tired from active competition and turned his attention to building a new breed of Black Belt Champions. He began learning new arts and started experimenting with teaching Multi-Style Mixed Martial Arts. (MMA)

Similar to Bruce Lee’s philosophy, he was blending the best strengths of each art that he was studying. He also began to study more about the psychological side of Peak Performance and added in proven success principles. That concept lead to an entire Life Skills Curriculum that is designed to influence a students Attitude, Behavior and Character.

Almost instantly, students were enjoying the benefits of this new format and were training with greater intensity, while gaining a deeper level of personal growth and expertise.