In the end, whether you have to discourage a would be predator or combat an attacker mushin, that calm in the face of opposition, that stillness in the storm, will serve you to greater affect and help you implement the tools that you have honed in the dojo for just such an occasion.

Okay, many of you are probably looking at me funny at this point. What the heck is he talking about now? Has he finally lost it?

Not really, my brothers. You probably think that stillness in combat is a recipe for disaster. It depends on what one means by stillness.

Have you ever seen a seasoned martial artist in a tournament? Too often all of those techniques that looked so beautiful during kata and are so sharp and powerful in the dojo degenerate to ineffectual flailing in a tournament. Worse yet, have you ever seen that Black Belt technician freeze up in the face of an attack and get his hat knocked around backwards in a fight? I’ve seen Black Belt fighters look like grammar school girls in a playground brawl. Embarrassing to see.

The Black Lotus Martial Art Association came about because a lot of the Black Belts being turned out in some of the dojo(s) in Chicago were being trounced in the streets. Commercial schools were vying for students and many schools had a contract that promised a student a black belt in a year. I remember when it took from six to eight years to earn a black belt. That is if you were capable of attaining a black belt. Many trained for years and never were able to attain a Black Belt. I also remember when there was no black belt rewarded to a student under eighteen years old. There were no poon belts or junior black belts. Let me reveal my age here. I remember when there were only three belts. White, brown and black and there were no degrees in those belts. Okay, I realize I’m going back a ways. Animal skin gis and loin cloths.

The collaboration of instructors that eventually became the BLMAA joined together to help those inept, would be, black belts and in the process save the reputation of the art in Chicago. In those days people would sometimes come into karate schools and challenge the students or the instructors. Some were practitioners from other schools or systems and some were hooligans from the neighborhood who, for whatever reason, took exception to the school. That was karate in the sixties and seventies in the big windy.

Unfortunately, too often, even good karate practitioners were being embarrassed in the streets. They knew the techniques but lost it under the stress of combat. Believe me, fighting isn’t the same as sparring.

Many combat oriented systems have done away with the more complex techniques all together. One reason is because they take too much time to perfect but also because most people can’t use them in the heat of combat. When adrenalin charges the blood and heart rate goes up, eye hand coordination goes out the window. For the most part only gross motor skills are there for the average person under those circumstances. Yet many of those classical techniques were combat effective when these arts were actually combat systems. What happened? Why don’t those tried and true techniques work for today’s fighter? They seem to work in the dojo.

It isn’t the techniques that fall short it’s the practitioners of today. Even many of the highest degree black belts are only partially trained in this modern age. In a day when karate and its sister arts are practiced for competition or for physical exercise or even for spiritual reasons, the ingredients that made them most effective have been lost or simply aren’t being taught.

In the BLMAA we have given in to the trend of many of the modern combat systems. Most of our techniques are basic and based on natural reactions. We concentrate primarily on techniques that incorporate gross motor movement. With my private students however, I teach many of the more advanced and complex techniques. In the more basic combat system our pressure point techniques attack balance, vision and breathing. We leave the more advanced pressure point techniques for the most advanced student and our inside or closed door students.

Those more advanced techniques are sound in theory and given the proper training can be effective. The necessary training involve endless repetition, strategy, what we call tai sabaki or advantageous positioning, footwork, breathing and mushin.

Strategy, footwork, body positioning and repetition are technical aspects of the art but breathing and mushin, which I’ll explain in a minute are more esoteric. Too often many karateka will only step backwards or forward in a fight. A few are taught to sidestep but lateral motion is too often completely missing. To a large extent lateral movement makes tai sabaki possible.

Many fighters have no strategy in a fight. They just wade in punching and kicking. Perfecting those technical skills will go a long way toward making a better fighter. Stratagy is learned in the dojo not in the heat of combat.

Constant repetition translates into muscle memory. Without muscle memory it’s impossible to be an effective fighter. If you have to think about it it won’t work. In a fight you have time to only act and react. You don’t have time for planning. 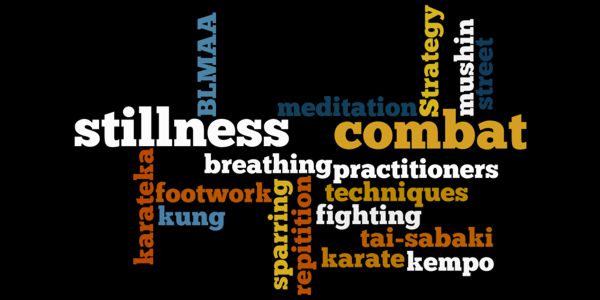 Okay we’ve got that out of the way now let’s address the real meat of this essay. I’m a Christian minister so I’m a little suspect about the spiritual implications of the zazen and transcendental meditation that sometimes accompany the practice of the Eastern martial art disciplines. This isn’t a theological essay so I’ll leave that argument for another time and place. Come to my Wednesday evening Bible class at my church and I’ll address that for you. Still, even without the religious or spiritual implications that Eastern meditation would involve some kind of meditation is necessary if you hope to be able to implement some of the more challenging karate, kempo or kung fu techniques in combat. Meditation not only calms and focuses the spirit it also helps a practitioner learn to control his breathing. Breathing controls heart rate and we’ve already touched on the effect of erratic breathing and a wild heart rate. What we are trying to do is implement a state of mushin into combat. Okay, oh great grand pooba of everything ryu karate. What the heck is mushin? I’m glad you asked, Hoppa Grass.

Picture in your mind a calm lake. I mean really calm. Not a ripple on the water. In such still water you can see your reflection like in a mirror, but let there be even the slightest agitation to the surface of the water and all you see are erratic flashes of light. A calm lake reflects. Troubled water refracts. You get plenty of light, but no focus of vision or perception. We liken that calm lake to mushin. Mushin is the calm almost detached stillness that the ancient martial artist incorporated into effective combat. In that state he could use the most complex skill effectively.

Let something startle the sh… I mean scare the heck out of you and see how much control you have over your motor skill. You can’t even get your key into your car door until you calm down. If you don’t have a remote you’ll have to stand in the cold until you get yourself together. If the unexpected scare was nothing but the backfire of a passing newspaper truck you’re okay, but what if that sudden sound was the scream of a deranged assailant? Can we talk about buying the farm? That’s where mushin comes in. If you can keep your center and control breathing and heart rate and you’ve developed your defensive skills into muscle memory you have a good chance of surviving the experience. It is imperative to have a still mind in the face of impending danger. Without it you become a spectator and worse a victim.

If you are going to be effective in the face of combat you have to be able to remain calm enough to fight back. If you’re struggling to breath and trying not to soil your undies, you’re toast. If you want to be able to give a good account of yourself in a confrontation you will have to learn the art of stillness.

Mushin will serve you in every area of your life. You’ll be less challenged by life’s daily stress. You’ll be able to perform better in whatever opposition you are faced with. Finishing that brief. Passing that midterm exam. And yes winning that life and death struggle. You’ll be able to control your temper and deal with those pesky unsolicited sales calls that punctuate your evenings. You’ll be able to live your life more effectively unaffected by the little irritants that seek to knock you off your square.

Before and after your training and whenever possible during your work day find a time and a technique that allow you that moment of stillness and calm. Control your breathing. Breathe from the belly and not from the top of your lungs. Slow deep breathing promotes calm. If you find yourself in a threatening situation breathe don’t pant. You’ll find that if you are able to control your breathing you’ll maintain your calm. In many instances the calm demeanor you display in the face of the threat will be enough to make a miscreant think in terms of another target. Assailants want soft targets. They depend on your fear to take away your resolve and give them the advantage. They aren’t looking for that calm and confident individual. Predators are looking for easy prey. He is looking for an easy conquest not a hard fight.

In the end, whether you have to discourage a would be predator or combat an attacker mushin, that calm in the face of opposition, that stillness in the storm, will serve you to greater affect and help you implement the tools that you have honed in the dojo for just such an occasion.

Fighting is more than defense and offense. It’s more than a block, punch and kick. It’s an attitude; all of it is a package deal. No one part will work by itself, but if all elements are there and you are calm and confident you stand a more than better chance of coming out of the experience the victor. Knowing that should make you breathe easier.

The Reality of Combat: Are You Combat Effective?

Martial Arts Are About Survival