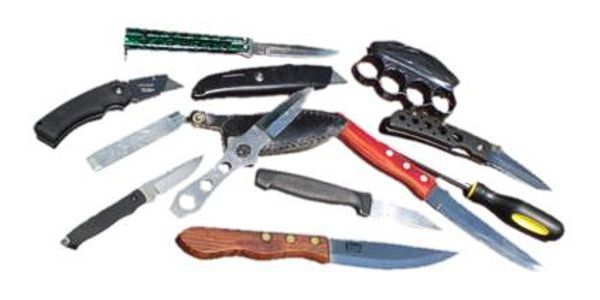 Unconsciousness and Death – Surviving an Edged Weapon Attack . . . witnessed over my 23 years of being a law enforcement professional. In this, the author first quoted a book written by Captain W E Fairburn called “Get Tough: How to Win In Hand-to-Hand Fighting” published in 1942. On page 99 of this text (fig.112) Fairburn provides the following information specific to “loss of consciousness in seconds” and “Death” specific to knife wounds:

I attempted to locate any medical literature surrounding the time that this book was published to support the above noted data, but I was unable to do so. If anyone reading this can provide me with the medical literature that supports Fairburn’s data from that time period, please send it my way.

Based upon the above noted Fairburn data, I began my literary review of the martial art/self-protection/combatives academia, specific to unconsciousness and death specific to knife wounds, and what I found was very surprising if not troublesome. Much of the data supplied in these books, articles, and papers that I reviewed were just a rehash of Fairburn’s numbers, and others were anecdotal at best, and more often than not just plain negligent.

None, and I mean none, cited any medical literature to support their claims. Some stated that they had spoken to a medical professional (doctors and paramedics) to validate their claims, but yet they did not provide the names of these medical professionals, or their credentials, or even medical research links which would have helped validate their published writings.

After reading the above noted martial art, self protection, and combatives academia, and being less than impressed with their reported data specific to unconsciousness and death as it relates to knife wounds, I too decided to connect with the medical professionals. Two of the doctors that I connected with are experts in their field of medicine; both specialize in trauma care and critical care medicine, and have a plethora of firsthand experience in dealing with those who have been injured via an edged or pointed weapon:

When it comes to unconsciousness or death attributed to an edged weapon attack, we are talking about what the medical community calls “Shock”. Dr Porayko defines shock as, “the development of multi-organ failure due to insufficient oxygen being delivered to the tissue to meet their metabolic needs.”

Specific to shock as it relates to unconsciousness and death, Dr Porayko stated the following to me:

“A 70kgs (154lbs) male’s circulating blood volume is about 70ml/kg which equals about 5 litres. Cardiac output is about 5-7 litres per minute. All the great vessels of the body act as a conduit of approximately 15-20% of CO/minute which equals about 1 litre per minute. The great vessels include the innominate artery, subclavian arteries, carotid arteries and some include the iliac arteries. The 4 atria, 2 ventricles and aorta all conduct the full cardiac output thus are well protected in the centre of the body behind the sternum and in front of the thoracolumbar spine.”

So why is the above noted information important, because hemorrhagic shock (blood loss) is based upon how much hydraulic fluid (blood) is leaked from the body. When it comes to understanding hemorrhagic shock, I would guide you to the following links that were provided to me by Dr Porayko:

Specific to my questions about unconsciousness and death if specific anatomical arteries or veins were cut, and given all the medical variable associated, the Doctors had to make the following assumptions first before they could answer my questions:

– There is no compression of a lacerated artery underway. This was irrelevant for a lacerated vein due to the fact that a vein can’t be compressed

– The subject is previously healthy with a normal haemoglobin concentration and has a normal VO2 max prior to being wounded.

– If an artery is the target, the artery is incompletely transacted. Completely transacted arteries go into vasospasm and retract into their perivascular sheaths which markedly reduces bleeding and even stopping bleeding all together in the case of smaller vessels. On this point Dr Porayko stated that this is the reason the Ghurkhas were trained to twist their knives in the femoral artery after puncturing it- to avoid a clean surgical transaction, thus preventing the vasospasm and retraction into the perivascular sheath, and instead to intentionally cause a hole in the vessel sidewall which is much more lethal.

The doctors also noted:
“although exsanguinations (death from blood loss) from a venous injury is much slower that an arterial one (because mean arterial pressure is usually at least 10x central venous pressure), the venous injury is much more difficult to treat and generally if arterial injured patients survive to hospital with manual compression, they will do well whereas major venous injured patients often die even after getting to the operating room.”

Of note, both doctors opinioned that the numbers provided by Fairburn and other combative/martial arts instructors that I provided to them for review, specific to times for unconsciousness and/or death, are way too short. Both stated that they believed that these numbers are based upon “complete cessation” of all cardiac output through the involved vessel which is not the norm. In fact Dr Pryayko brought to my attention that during the French revolution when thousands of people were beheaded by guillotine, the attending doctors documented the presence of vital signs in the body for up to two minutes.

So based upon the above 4 “assumptions”, here are the numbers that the doctors I consulted provided specific to a level of hemorrhagic shock taking place which would lead to unconsciousness or death in “most” situations:

Subclavian Artery:
Approx 2-20 minutes. The doctors also noted: “this is a special circumstance anatomically because this vessel is protected by the clavicle and the first rib (sandwiched between them) if the Subclavian artery bleeds, the only way to compress it and repair< it is to open the chest by thoracotomy.” You cannot compress it. Patients usually die on the scene or en-route to hospital. Subclavian Vein:
Approx 15-60 minutes

Brachial Artery:
5-60 minutes. The doctors also noted: pretty unusual to see these without compression by EMS)

Femoral Artery:
5-60 minutes. The doctors also noted: Pretty unusual to see these without compression by EMS)

Aorta or any part of the heart:
Approx 1-2 minutes. The doctors stated that the heart conducts 100% of cardiac output. Assuming transaction and that the hole does not seal. Ventricular holes do usually seal while the arterial ones do not due to the orientation of the muscle fibres.

Two other areas of note made by the doctors also included:

Popliteal Artery:
Located behind the knee, would be similar (but slightly less) to cutting the femoral artery

Inferior Vena Cava:
Can be attacked via a deep abdominal stab, similar to cutting the Jugular vein

Both doctors stated that these are estimates based upon current medical literature and their first hand experience, but both also stated that there are always exceptions to these estimates. Both gave examples where patients who had received severe knife wound survived even with a heavy loss of blood, some examples:
– One of the doctors has seen several patients with traumatic cardiotomies (a big hole in the
heart) survive for 20 minutes before being treated

– One of the doctors treated a patient who had been stabbed in the abdomen, where the knife hit the inferior vena cava, his belly was full of blood, he was conscious, although in shock, an hour after the injury when he arrived in the ER. He survived.

The doctors stated that they have seen patients who have bled out nearly their entire blood volume, but yet are still awake and talking (although looking bad) for many minutes following an injury and “survive to tell their story.” Dr Porayko stated, “So it is a mistake to underestimate a person’s capacity to compensate for acute hypovolemia and anemia (hemorrhagic shock), even when very severe. This is especially true in the younger population.

So why did I write this article?

– Much of the information being propagated in the martial arts, self protection, and combatives industry specific to unconsciousness and death as a result of a knife attack, specific to blood loss, is inaccurate. I wanted to provide those who are looking to share current and accurate medical opinion with the above noted information, hoping that it will go viral in our industry. For those who don’t and continue to teach inaccurate information, shame on you.

The most important reason for this article, SURVIVAL !!!!!! Words are powerful, and can create our own reality. If you “believe” that you will die in seconds because your radial artery has been cut in a knife attack, and your instructor told you (and you believe him) that you only have 30 seconds to live before you die from blood loss, then you likely will die.

As can be seen from the numbers provided by the doctors, even if one receives a severe cut or stab to a major blood vessel or organ, you can still fight for several minutes (not seconds), and even longer, and still survive. As Dr Hall stated, “The decision to survive, it is that intangible thing that cannot be measured, and I think is part of the reason that some people survive and some don’t. You have to decide ahead of time that you are going to live.” Right on Doc!!!!!!!!!!

Tom Kohl - March 18, 2013
We use cookies to ensure that we give you the best experience on our website. If you continue to use this site we will assume that you are happy with it.OkRead more