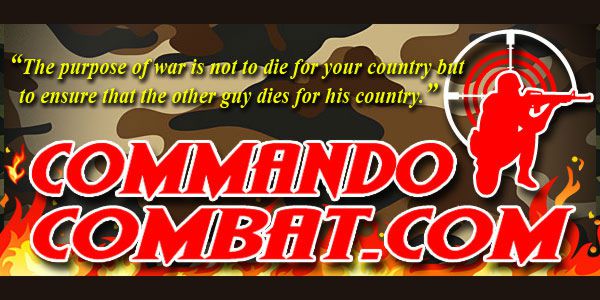 Development of Military Martial Arts:
Military Close Quarter Combat (CQB) Arts are very different from Civilian Martial Arts. Tracing the development of Military Martial Arts (Now also called “Combatives”), it all started with World War II, when British Army started developing a quick system of Hand to Hand Combat called UAC. This was hastily compiled with major influence by judo & wrestling. Thus they used to catch a punch, grab a kick, grab a bayonet thrust at them and throw! Very impractical, but this method spread all over the allies as UAC.
ACCS : Advanced Commando Combat System

Till the late nineties, Military Martial Arts were not in spotlight. The British Unarmed Combat was adopted by most Allies and by the armies who derived support from the British.

Today, in the modern era, most armies all over the world, have reviewed their Unarmed Combat systems and CQB systems and began the process of modernization. In India, a Doctor couple, Prof. Dr. Deepak Rao and Dr. Seema Rao have made significant efforts in bringing about modernization of close combat arts.

Their system named the Advanced Commando Combat System, (ACCS) is derived from their research and study of training over 15,000 soldiers from the Indian forces.

It is to be noted that the Rao couple have devoted their life to training soldiers from the Indian forces and never accepted any compensation for their work. Their efforts and research in modernization has received official appreciation from the Indian Army Chief in 2001. ACCS represents the first few of the newer generation Military Martial Arts & the art has chosen to remain low profile, non commercial & dedicated to training the Indian forces.

Recognition
The Art ACCS today is recognized as the Ninth Military Martial Art in the world after British UAC, American Combatives, German H2H, Russian Sambo, Israeli Haganah, Chinese Defendu & Gung Fu, Japanese Samurai Budo, Italian Army arts. This recognition is via American, European & Asian (Japanese & Chinese Bodies). However the real acknowledgement comes from the fact that ACCS has got popular with the Indian armed forces for over 14 years which is an acknowledgement of a Military art by the second largest Military in the world. The ACCS research has been acknowledged by the CHIEF OF ARMY STAFF APPRECIATION twice in 2001, and 2005. No other Military martial art in the world has received such a high honor. It is also an art that has over 300 official endorsements from Top Brass of Army, Air Force, Naval Chief, DGPs, NSG, MARCOS, GARUD, BSF etc. And it is totally INDIAN.

Specifics features of ACCS
What is unique about this art is that ACCS is strictly a Military Art, with easy to learn techniques that require more fitness, ruggedness& knowledge rather than precision, skill & years of practice. Also the situations that ACCS trains in is not inside the ring or wrestling arena or street, but for situations like Close Quarter battle Ops, Room Combat, Confined Space Combat like Aircrafts, Close Quarter Ground Clearing & Occupation and Special Operations.

Our art ACCS today is the only Military art in the world which is totally Military based without any civil influence of Judo, Karate & Sport Shooting. It is also the only indigenous art with no mimicking of British Snap Shooting or US Tunnel Vision Shooting techniques. It is also the only art that covers the full gamut of CQB from Hand to Hand to Reflex Shooting, Sentry Termination, room Combat, Small Team Tac etc

Reflex shooting of ACCS
Weapon to Weapon W2W application: The ACCS is well known for its innovative technique of close quarter shooting, predominantly developed for sport shooting and CQB operations. The technique is different from conventional shooting in two respects a) It advocates carrying the rifle barrel pointing upwards while engaging the target b) shooting by aiming only with the foresight as angle of deviation is minimum at close quarters. ACCS claims that this reduces the reaction time and improves shooting accuracy

Sentry Termination applications
Weapon to Hand W2H application: ACCS has many varieties of dagger terminations to the neck, abdomen and kidneys. Different techniques are employed to cause hemorrhage within body cavities rather than external bleeding leaving no signature in a covert operation.

Edged weapon defense and defense to firearm threats and attacks
Hand to Weapon H2W application: ACCS has techniques of avoiding the arc of thrust of edged weapon attack and deflecting the line of fire while threatened by a firearm. ACCS has developed a special technique called bullet evasion where the defender ducks the line of fire during alignment of the firearm attack.

Confined space combat applications
ACCS teaches use of intra-aircraft objects to function as weapons in aircraft combat. Pens, spoons, plastic bags, blunt objects of everyday use such as bottles, torch, bags etc are employed as modified weapons to achieve its cause.

Conclusions
The face of modern day military martial arts is changing with most armies adopting realistic systems. We must make clear differences between civilian applications and military application of combat arts.