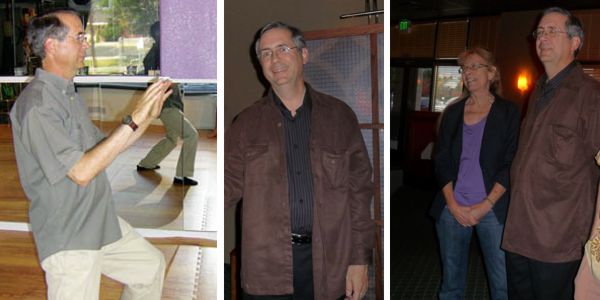 I’ve found over the years that it’s hard to learn new things without at first admitting ignorance and preconceptions. Well, let me show you how really ignorant I can be. I attended my first tai chi ch’uan class on Sunday at 9 a.m. at the Mind, Body & Pilates studio. The instructor was Mark Lord, a charming guy, full of information about the exercise, history and discipline of the martial art-related activity.

You’ve probably seen tai chi ch’uan practitioners on TV and occasionally in parks around Northern Nevada. It’s that formal looking, slow moving dance performed without a partner. I’d seen it but hadn’t researched it. I intuitively guessed that it had things in common with yoga, and somehow through the meme, I thought it had martial art beginnings, but that was about the sum total of my understanding.

Mark Lord took a bit of time before class to explain some things. For one, the practice sprang out of the Chinese Taoist culture hundreds of years ago. (Further research has shown me there are about a million different stories of the origins of tai chi ch’uan.) He told me how in ancient times Chang San-feng watched a battle between a snake and a bird. The bird would lunge with its beak, but the snake’s fluidity would allow it to flow around the bird’s strike. The discipline follows the notion of precisely aligned and practiced moves that—in a battling situation—would use the attacker’s motion to guide him or her off balance. (I guess after the assailant is taken off balance is when you pull the Glock and defensively pop a cap in his or her ass, but that’s pure speculation on my part.)

At any rate, the discipline teaches mental and physical self control—the Tao of tai chi ch’uan, which is self-discipline as opposed to control of others. As a martial art, it emphasizes circular motion over lunging, straight and powerful motions, like a punch. I guess it’s a primarily defensive martial art, but honestly, we never got into how the practice would work in a real fight. Lord told me its main components are gentleness, peace, balance and respect. He also said it could be thought of as a brother to yoga, and many of the benefits of yoga are also present in tai chi ch’uan: strength, flexibility, balance, clarity of mind. Unlike yoga, you never get down on the floor; all movements are performed from a standing position.

Now you know everything I know.

The class itself was small; seven of us all told. Typically, there’s a $10 charge, but I got the class on-the-house because no one could process my debit card.

Mark Lord would occasionally call out names of movements—like Movement of Bear or something to do with a crane. But those names were meaningless to me, so I tried to mimic his movements. At times, we’d turn to one side, where I had the choice of whether to break the posture and watch him, or mimic the movements of whoever was in my field of vision.

But here’s the thing—even though I was in unfamiliar surroundings, performing unfamiliar actions, I had little difficulty getting into that calming headspace that comes with yoga. I thought about it later, and I think that was due to Mark Lord’s soft, almost hypnotic calling of the positions and the repetition of the movements. After I assumed my best effort at correct position—occasionally, Lord went through the class to adjust people’s stance—I wasn’t really thinking about the position, but concentrating on my breath, balance and fluidity—a standing meditation.

Mark Lord told me he has students up to the age of 92, and—only slightly less ignorant than I was before my first class—I believe it. It’s less vigorous than yoga, although at times I’d feel a burning in my muscles, and I can see how practitioners could reap the physical, mental and soulful benefits of the discipline for a lifetime.

Editors note: Mark Lord spoke fluent Chinese and had lived in Taiwan for a number of years. Besides being a “thoughtful and giving” Tai Chi instructor, Mark Lord played the trumpet. Mark Lord died on March 19, 2014 from a heart attack while teaching class. We know his gentle spirit rests in peace.

The memorial service for Mark Lord will be Saturday, March 29, 2014 at the Center For Spiritual Living, 4685 Lakeside Dr., Reno, from 2 to 4 PM. Please join us to honor Mark and his family!!!