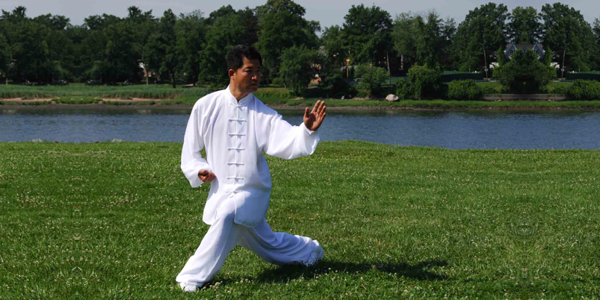 Tai Chi means “grand ultimate fist.” Tai Chi is one of the oldest martial arts in the world. It is so old that its origins are lost. Little is known about its early history, though its foundation is credited to the Taoist Chang San Feng (Chang Zhangfeng) more than eight hundred years ago. This soft style originated in China. It consists of slow, connected movements that are practiced to reduce tension, to slow breathing and to clear the mind. Moving correctly and allowing the chi to circulate freely is the goal. Students learn to yield so that the attacker is overcome by his or her own force. Tai Chi also has weapons, principally a double-edged straight sword. It is a method for achieving physical fitness and serenity of mind. It is not ordinarily regarded as a practical self-defense system, though the movements have self-defense applications, and practitioners can achieve great power in their techniques.

In China, it is very popular. It is practiced by individuals and groups. Chen is the original style, which indicates to some historians that the Chen family in the Hunan province must have developed it. Other important schools included Yang, which developed directly from Chen and is the most widespread; Wu and Sun, which derived from Yang style, plus Cheng, a more philosophical version. Fu, practiced mostly in China, is less well-known. Others include Li, Hao and Hsu.

The underlying theory of Tai Chi is that the mind, body and spirit must be unified for wholeness and complete health. Opponents can be people, but also illness of mental or physical origin. All must be combated. The art is practiced alone in forms, and with partners. The forms include the famous Long Form, which can take more than half an hour to complete, and the Short Form, a modified version that can be performed in less than ten minutes. The principle of yin-yang is important, and a complete understanding of such harmony is emphasized. Its original concepts are still intact: it teaches continuous movement, relaxation, solid stances, a straight body and the movement of chi from inside the body to outside. Each arm protects half the body and the hands never reach farther forward than the toes. Tai Chi is one of the five Chinese accomplishments thought to make a superior person, along with painting, poetry, calligraphy and music. Breathing exercises for health, Ji Gong are often taught with Tai Chi. (Taken from The Martial Arts Encyclopedia by Jennifer Lawler)

Tai-Chi is one of the most popular martial arts and fitness routines in the world today. It is sometimes referred to as Chinese shadowboxing, or slow-motion Kung-Fu. On any given morning, you can find groups of Tai-Chi players practicing in parks around the world, especially in areas with a Chinese population. The slow, smooth motions and considerable benefits of Tai-Chi practice have made it the “newest” innovation in health improvement and rehabilitation.

Among the many sub-styles of Tai-Chi (also spelled as T’ai Chi Ch’uan, Taijiquan, or Taiji), the Yang style is the most widely practiced and proliferated. However, the traditional Yang style Tai-Chi is quickly becoming extinct as more and more generations of new-agers propagate the legacy of a toothless tiger.

The benefits reaped through Tai-Chi training are often hard to quantify, and sometimes the subject of debate. But there is little argument that the Tai-Chi training routines offer students and practitioners a form of exercise unlike any other.

Some of the many documented benefits include:

The mental and strategic benefits of Tai-Chi training have a great deal to do with the Taoist philosophy from which the art was born. The wu-wei concept of “yielding” and meeting force with emptiness makes the psychological side of Tai-Chi so rich and powerful.

For example, instead of reacting to a co-worker’s comments with hostility and/or anger, a well-trained Tai-Chi practitioner might simply choose to listen to the comments and answer calmly and rationally, instead of letting the situation escalate out of control. Many short-tempered individuals who undertake Tai-Chi training report that their attitudes change greatly after a few months of regular training.

Traditional Tai-Chi, or Tai-Chi boxing, is not unlike other traditional systems of Chinese martial art training, including stancework, footwork, basic hand and foot techniques, breathing (Chi Kung – Qigong), sensitivity drills, and powerful martial art application. An instructor with a full understanding of the intent and spirit behind Tai-Chi’s true martial applications can offer his students the fullest understanding of its numerous health benefits.

True Tai-Chi is like a well-cut diamond. No matter how many times you look at it or examine it, it never holds the light in the same way twice. Each facet gives you a different perspective, a new and fresh way to enjoy the art.