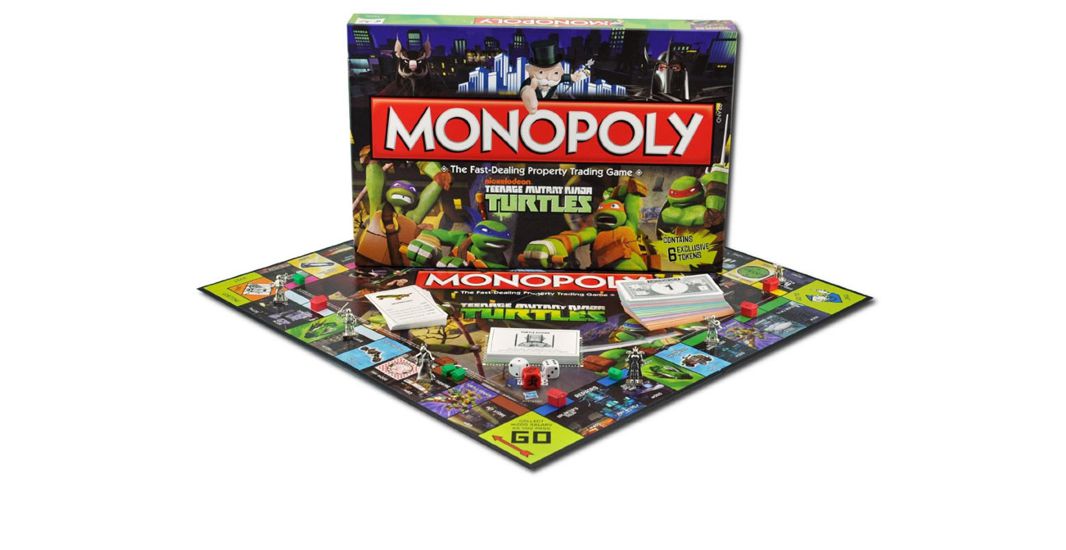 New York– July 24, 2014–Turtle fans of all ages can enjoy the Heros in a Half Shell in a whole new way with two original MONOPOLY games, Teenage Mutant Ninja Turtles Edition and MONOPOLY: Teenage Mutant Turtles Collector’s Edition. Produced by USAopoly, under license from Hasbro, Inc., and in conjunction with Nickelodeon, both MONOPOLY games include unique custom features. Launching fall 2014, both games will be available in specialty stores across North America, as well as amazon.com, with suggested retail prices of $39.95 and $49.95 respectively.
“We are very excited about this partnership and we believe these games are a perfect fit for multiple generations of Turtles fans,” says John M. Davis, President, USAopoly, Inc.

“Partnering with USAopoly to create these two new Teenage Mutant Ninja Turtles games allows players to experience this classic board game in a whole new way, said Manuel Torres, Senior Vice President, Global Toys and Publishing, Nickelodeon Consumer Products. “The characters, villains and locations fans have discovered with the hit-franchise come alive in a style that the whole family can enjoy together.”

USAopoly also pays tribute to the classic Turtles, considered one of the most popular kids’ entertainment brands of the 1980s, with MONOPOLY: Teenage Mutant Turtles Collector’s Edition. In this version, players choose one of six custom sculpted vinyl tokens including: Leonardo, Raphael, Donatello, Michelangelo, Splinter or Casey Jones, and then buy, sell and trade the most notorious Turtle villains on the colorfully illustrated game board. Properties can be enhanced with custom Pizza Slices and Pizza Boxes, replacing the traditional houses and hotels.

About USAopoly
USAopoly, Inc., https://theop.games) is a leading game manufacturer in the specialty market offering the world’s best-known games (under license from the Entertainment & Licensing Division of Hasbro) and an innovating game developer of party games like Telestrations.

About Hasbro, Inc.
Hasbro, Inc. (NASDAQ: HAS) is a branded play company dedicated to fulfilling the fundamental need for play for children and families through the creative expression of the Company’s world class brand portfolio, including TRANSFORMERS, MONOPOLY, PLAY-DOH, MY LITTLE PONY, MAGIC: THE GATHERING, NERF and LITTLEST PET SHOP. From toys and games, to television programming, motion pictures, digital gaming and a comprehensive licensing program, Hasbro strives to delight its global customers with innovative play and entertainment experiences, in a variety of forms and formats, anytime and anywhere. The Company’s Hasbro Studios develops and produces television programming for more than 180 territories around the world, and for the U.S. on Hub Network, part of a multi-platform joint venture between Hasbro and Discovery Communications (NASDAQ: DISCA, DISCB, DISCK). Through the company’s deep commitment to corporate social responsibility, including philanthropy, Hasbro is helping to build a safe and sustainable world for future generations and to positively impact the lives of millions of children and families every year. It has been recognized for its efforts by being named one of the “World’s Most Ethical Companies” and is ranked as one of Corporate Responsibility Magazine’s “100 Best Corporate Citizens.” Learn more at www.hasbro.com.
© 2014 Hasbro, Inc. All Rights Reserved

About Nickelodeon
Nickelodeon, now in its 35th year, is the number-one entertainment brand for kids. It has built a diverse, global business by putting kids first in everything it does. The company includes television programming and production in the United States and around the world, plus consumer products, online, recreation, books and feature films. Nickelodeon’s U.S. television network is seen in more than 100 million households and has been the number-one-rated basic cable network for 19 consecutive years. For more information or artwork, visit https://www.nickpress.com. Nickelodeon and all related titles, characters and logos are trademarks of Viacom Inc. (NASDAQ: VIA, VIA.B).

USAdojo - November 9, 2017
We use cookies to ensure that we give you the best experience on our website. If you continue to use this site we will assume that you are happy with it.OkRead more