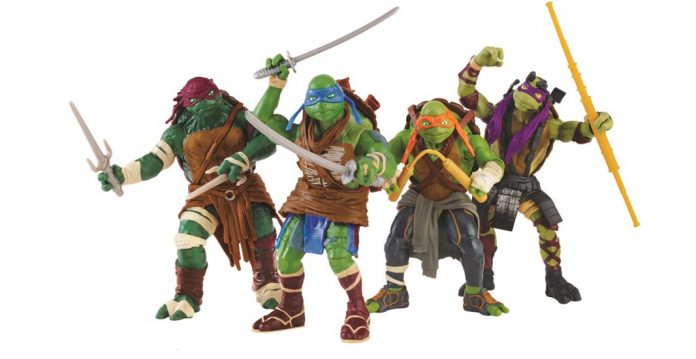 “We are proud to introduce an all-new line of toys that reflect the personalities and distinctive look of the Turtles in the movie,” said Karl Aaronian, Senior Vice President of Marketing, Playmates Toys. “The range of toys will provide kids and fans of all ages with a one-of-a-kind ninja play experience that brings their favorite characters from the film to life.”

“Playmates has outdone themselves yet again, with an incredible product offering for the Teenage Mutant Ninja Turtles movie,” said Manuel Torres, SVP Global Toys and Publishing, Nickelodeon Consumer Products. “These products – from action figures to role play toys – will provide hours of play, collectability and deepen our fans’ connection to the beloved brand.”

Vehicles
The Turtle Assault Van is packed with ninja action features, allowing kids to drive the Turtles into their next battle and recreate their favorite scenes from the movie. Features include a spring-powered Turtle torpedo, launching luge assault vehicle, pop top hatch and side attack ramp. The control cabin holds the basic Ninja Turtles action figures.

About the Teenage Mutant Ninja Turtles Movie
In this modern-day iteration of the popular franchise that has captivated audiences of all ages for decades, the Turtles must work with fearless reporter April O’Neil (Megan Fox) and her wise-cracking cameraman Vern Fenwick (Will Arnett) to save New York City and unravel Shredder’s diabolical plan. Based on the Teenage Mutant Ninja Turtles characters created by Peter Laird and Kevin Eastman, written by Josh Appelbaum & André Nemec and Evan Daugherty, Teenage Mutant Ninja Turtles is produced by Michael Bay (director and executive producer of the blockbuster Transformers franchise), Andrew Form, Brad Fuller, Galen Walker, Scott Mednick and Ian Bryce, and directed by Jonathan Liebesman (Wrath of the Titans).

About Playmates Toys
With a history of over 40 years, Playmates Toys is today among the most well-respected and innovative marketing and distribution companies in the global toy industry with a proven history in the creation of imaginative products as well as the development and management of profitable, long-term brand franchises. Key brands include TEENAGE MUTANT NINJA TURTLES, HEARTS FOR HEARTS GIRLS and WATERBABIES. From its offices in Hong Kong and California, Playmates designs, develops, markets and distributes its products in over 60 countries worldwide. For more information, visit https://playmatestoys.com or https://www.facebook.com/TMNTPlay

About Nickelodeon
Nickelodeon, now in its 35th year, is the number-one entertainment brand for kids. It has built a diverse, global business by putting kids first in everything it does. The company includes television programming and production in the United States and around the world, plus consumer products, online, recreation, books and feature films. Nickelodeon’s U.S. television network is seen in almost 100 million households and has been the number-one-rated basic cable network for 19 consecutive years. For more information or artwork, visit https://www.nickpress.com. Nickelodeon and all related titles, characters and logos are trademarks of Viacom Inc. (NASDAQ: VIA, VIA.B).