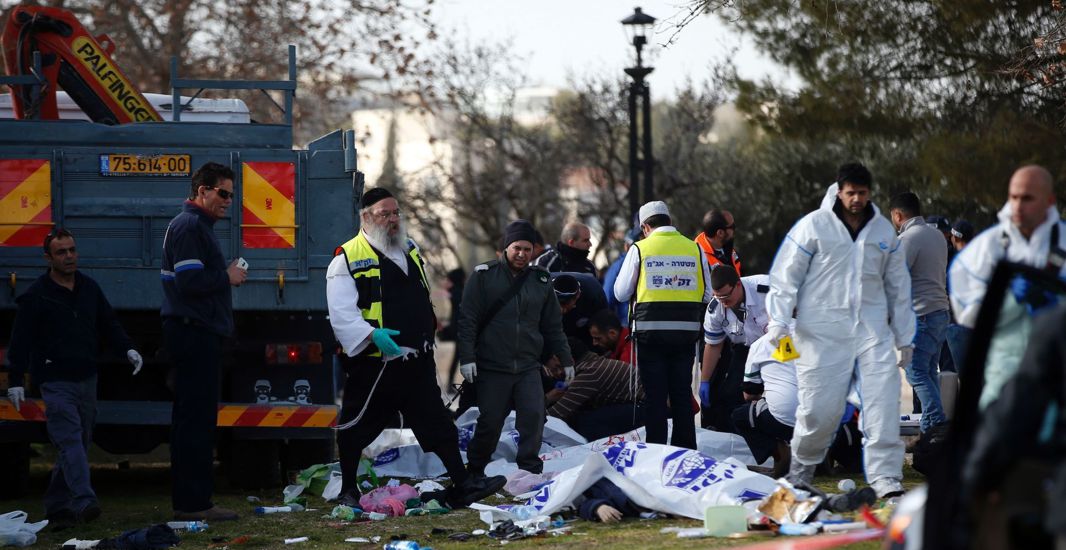 Yesterday’s terrorist attack in Stockholm saddens me greatly. All the more so, since I know how helpless you feel in these situations. Innocent people, shopping, having coffee with friends, strolling down a popular pedestrian street, feeling safe, without even thinking about the word “safe” because it’s something that you take for granted – especially in central Stockholm. Again, I send a big loving hug to my friends back home. I hope this is the last attack ever, you have to live through. I hope the man who was arrested is the driver…

The Swedish newspapers are naturally full of details about the terrible attack, and also comparisons to other countries in the Western world that have suffered similar terrorist attacks. But, unfortunately, everyone conveniently “forgets” about Israel and how much terror we suffer here on a daily basis. Israelis are no different than EU inhabitants. Israelis also go about their business peacefully and are suddenly struck by death and disaster, without warning, without reason and without any sense of sanity. I will take the liberty of copying from Wikipedia (thanks to Google Translate for the translation), so you will know about the Truck-car-ramming terrorist attacks in Israel

These are of course just a fraction of all the other kinds of terrorist and violent attacks of stabbings, shootings etc. that the civilians in Israel have to live (and die) with, every single day. ~ Naomi Gattegno

Relatively common in Israel bulldozer attack performed by the Palestinians , albeit relatively limited methods of terrorism and other. Following the attack at the Azor junction on February 14, 2001 , many of the hitchhikers were protected by a fence that separates them from the road, so that it is impossible to hit those waiting in the jeep .

February 18, 1987: A terrorist hit his car during an IDF patrol in the Askar refugee camp in Nablus , wounding two soldiers before being shot by their friends. [1] One of the soldiers died of his wounds after a year and a half in the hospital.

November 30, 1989: The first terrorist attack on civilians – when a terrorist ran over Avigdor Dahari at the Gush Katif intersection. [3]

October 11, 1991: A terrorist ran over a group of soldiers waiting at the Tel Hashomer junction, causing two dead soldiers and 11 wounded.

February 26, 1996: Terrorist ran waiting at a bus stop at the intersection of French Hill in Jerusalem , causing one casualty and several wounded. The terrorist was shot to death.

August 10, 1999: A terrorist ran over two female soldiers at the Nahshon junction. The terrorist escaped, and a few minutes later he ran back to the wounded. After police fired at him, the terrorist lost control of the vehicle and was killed. [4]

October 1, 2000: A Palestinian driver injured two policemen lightly during an attempt to run over East Jerusalem. [5]

14 February 2001: attack on the bus in the area – a terrorist who was on the bus ” bundle ” ran killed seven soldiers and a civilian were in Hitchhikers station at the junction area . The terrorist was captured after he was shot and seriously wounded. [6]

March 1, 2001: Driver cab Palestinian officer ran over a border guard who directed the movement of taxis in barrier Taybeh and cut it easy. [7]

March 26, 2001: Palestinians ran over a policeman policemen at a checkpoint between Tulkarem to Taybeh and easy wounding him, then fled. [8]

January 28, 2002: Palestinian terrorist ran over a soldier at the army next to Qalqiliya , reached Petah Tikva , where he took on another car, went to Bnei Brak , injuring a policeman and a soldier saw the incident. The terrorist was shot dead in Bnei Brak. [9]

July 2, 2008: an extraordinary bulldozer attack, which occurred terrorist from Sur Baher on Skid ( “bulldozer”) and raced along the 500 meters in Jaffa Street in Jerusalem, while conflicts, trampling, crushing and turning of vehicles using the shovel. The attack lasted about five minutes, and ended when a soldier on vacation on the scene shot and killed the terrorist. Three people were killed and 70 injured. [10] [11]

July 22, 2008: A suicide overridden by the backhoe was held in Jerusalem, adjacent to the Liberty Bell Park . Twenty-four people were injured in the attack. The terrorist was shot to death by a passerby and a Border Police officer. [12]

22 September 22, 2008: from the terrorist attack in Jerusalem. A terrorist driving a private vehicle ran over a group of soldiers and passersby at IDF Square, and the terrorist was shot to death by the company’s deputy commander. [13]

December 27, 2008: A terrorist attack in the A-Tur neighborhood of East Jerusalem. An Arab youth watches a police car run over and injures a police officer. The attack was starting on the day the IDF in Operation Cast Lead in the Gaza Strip. [14]

March 2009: from the terrorist attack near the Malha Mall in Jerusalem. Bomber driving on Skid hit the police car police, wounding two policemen easy sitting there. A policeman and a civilian who were there shot the terrorist, who died shortly after. [15]

April 18, 2009: A suicide knocking down near the Hizma checkpoint north of Jerusalem, two policemen were lightly injured and medium. The terrorist was caught and admitted in his interrogation that he intended to hit the policemen. [16]

June 11, 2010: a terror attack in the neighborhood of Wadi Joz in East Jerusalem . An Arab driver ran over four Border Police officers and wounded them lightly and moderately, and the terrorist was shot and killed. [17]

May 15, 2011: A terrorist attack in Kfar Shalem in Tel Aviv. A resident of Kfar Kassem raced wildly on a bus in Sderot, killing one person, wounding a large number of people, and causing extensive damage to vehicles and infrastructure. After a tantrum and hit a civilian through partial light, taken over civilians and arrested, was brought in for questioning, was indicted for murder, and after a full trial court found him guilty of murder and attempted murder in seven more, and he was convicted. [18] The attack was carried out on the morning of Nakba Day.

August 29, 2011: A Palestinian resident of Qalqiliya seized at knifepoint on a taxi in southern Tel Aviv and drove her towards the club Artist 17. The terrorist raced towards a checkpoint erected near the club due to warnings of an attack and hit the policemen in it. He then began stabbing the wounded and the people outside the club, shouting “Allahu Akbar”. Eight people were wounded, including three policemen. [19] [20]

October 17, 2013: A Palestinian driving a backhoe burst into a military base north of Jerusalem. One soldier was lightly wounded in the attack. The terrorist who was shot and killed is the brother of the terrorist in the tractor attack on March 5, 2009. [21]

July 25, 2014: An attempt to run over the Gush Etzion junction by means of a private car. A girl was lightly wounded.

August 4, 2014: Arab resident of East Jerusalem used in excavator in Jerusalem, ran over and killed one civilian and hit in seven, became a bus where there were few passengers, and shot dead by a policeman Israel ( 9 October sealed the terrorist’s house). [22]

October 22, 2014: Palestinian resident of east Jerusalem who was driving veered off the road and Information sped toward the station light rail in Jerusalem again Ammunition Hill and ran eight people including two badly injured: 3-month old baby and an elderly woman. The baby died shortly afterwards and another woman died on 26 October . The attack wounded two more moderately and the rest was light. The terrorist tried to escape a shot in the stomach and was seriously wounded and died a few hours later. [23] A month later, the IDF demolished the house of the terrorist. [24]

November 5, 2014: A Palestinian from the Shuafat refugee camp who drove a commercial vehicle and trampled pedestrians waiting at the light rail station in the Sheikh Jarrah neighborhood of Jerusalem. Two people were killed [25] and 13 others were wounded, the terrorist himself was shot and killed on the spot. [26]

November 6, 2014: A Palestinian ran over three IDF soldiers from the Kfir Brigade near the IDF position on Route 60 near the village of Al-Arub in Gush Etzion. The three were moderately to severely injured and Hadres fled the scene. A short time later, the vehicle was caught and the terrorist surrendered the next day to the authorities, and in his interrogation he admitted that it was a terrorist attack and not a car accident. [27]

April 15, 2015: Terrorist ran over a pedestrian near the neighborhood of French Hill in Jerusalem, killing one and seriously wounding another one. [28]

May 14, 2015: A terrorist attack at the entrance to Alon Shvut. A 22-year-old Palestinian terrorist from Hebron ran over pedestrians at a hitchhiking station. One was seriously wounded, and three others were lightly-moderately injured.

August 6, 2015: A Palestinian terrorist ran over three IDF soldiers at the Sinjil junction on Route 60, near Shilo. [29]

October 11, 2015: An Israeli Arab terrorist ran over a girl at the Border Police junction on Route 65, near Umm al-Fahm.

October 13, 2015: A terrorist from East Jerusalem and the cousin of the murderers of the worshipers in Har Nof committed a terrorist attack and stabbing on Malki Yisrael Street in Jerusalem. Two civilians were critically wounded and one was killed. The terrorist was shot and later died of his wounds. [30]

December 31, 2015: An IDF soldier was hit by a Palestinian vehicle at the junction of the houses near Huwwara. [31]

January 8, 2017: Terrorist attack on Armon Hanatziv promenade: A terrorist who drove a truck strayed from the road at Armon Hanatziv Promenade in Jerusalem into a group of soldiers, ran to death and wounded 15.

April 6, 2017: A terrorist attack in Ofra. He was murdered and lightly wounded.

How to Survive a Train Derailment

USAdojo - December 18, 2017
We use cookies to ensure that we give you the best experience on our website. If you continue to use this site we will assume that you are happy with it.OkRead more