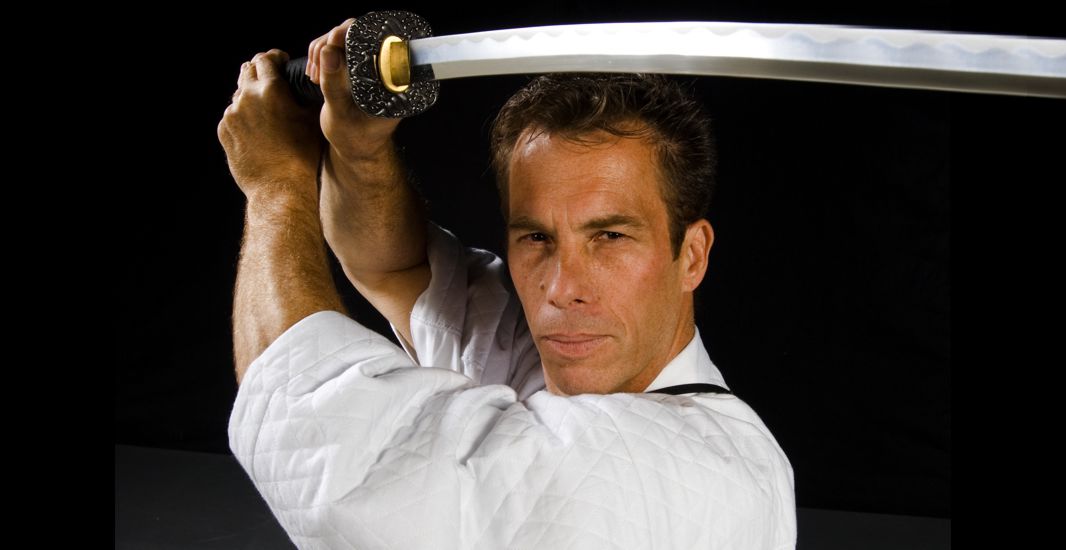 The best block is no block at all!! With that said, it is well known and documented that if you try to block an incoming weapon’s strike with your bare extremity, such as a forearm, it will definitely result in pain and more likely injury. Side stepping the strike and letting it safely pass you by is far more advantageous to you.

There is an unwritten rule, which is…..in bare handed combat with no weapon involved other than your own conditioned body you could effectively block or deflect the incoming strike. Even if you were to be struck with force that incoming strike could be blocked, slowed down or deflected preventing injury to the vital areas of your body i.e., your head. For example: a boxer’s jab to the head could render a knockout and thus win the match, but just a slight deflection of that incoming punch can change the dynamics of that punch, thus not producing a hit or point.

For centuries when combatants practiced or trained in any of the fighting arts, the one with the most calloused skin, taut muscles and strong bones could easily take more punishment than a person who was not physically fit. That is why in many fighting arts, such as karate, the conditioning aspects of self-defense are very important for the overall demeanor of the fighter.

Even the most conditioned bodies with years of rigid and brutal training producing rock hard shins, hands, forearms which become oblivious to pain are still susceptible to harm. Thai boxing is a very good example of the theory. They condition themselves repeatedly by hitting their legs or forearms with a bat over and over and also punching cement walls thus creating strong impervious physical scar tissue needed for that particular area, culture or sport.

The problem lies that with no matter how conditioned the body is a well placed strike with a weapon will undoubtedly best most any conditioned body part with the first blow and break down any remaining defensive techniques by the second or third. Foreign objects made from hard materials such as wood or metal, and particularly, one with a sharp edge could easily destroy anything in its path including a conditioned forearm. Imagine what the result would be if your forearm was pitted against a bladed or bludgeoning instrument?

Events that promote, “no holds barred” or cage fighting showcase large and muscular competitors with well conditioned bodies. The ones who do not have these attributes are usually pummeled to the ground quickly and left in a heap of twitching pain within the first round. There are a few exceptions, one being when a smaller person in stature bests a larger person. This is only accomplished when that smaller person is able to move faster and has more agility thus avoiding the crushing blows. Even then they must wear down the opponent before their own blows can work effectively unless there is a weapon present.

The old adage…”the bigger they are the harder they fall” is common knowledge in the myth David and Goliath. If David did not have a sling, which was a simple leather device, that holds a stone to be whirled and ejected, a different outcome would have been told throughout the ages. When a weapon is introduced into any situation it acts as an equalizer regardless of the size of the wielder. The weapon itself never backs down because it feels no pain and has no conscience but it can possess dangerous ferocity if necessary. With that said any person even with limited strength and physical ability can hold off many.

A man-eating lion without his teeth and claws would just be another common sheep, but a sheep that was to grow claws and teeth might become more aggressive and resistant to an attack. Therefore, if you give a person a weapon plus the knowledge behind it they could become a dangerous and formidable opponent when and if the occasion should arise. What happens when you don’t have a weapon? You can’t just put your head in the sand and hope for the best. You must also become aggressive and resistant to attack as a normal lion would do. As seen in the animal kingdom even the weakest has survival ingrained in their DNA. Man has the same instincts too, but many have become softened due to our present civilization. The civilized person would instinctively close their eyes, put their hands over their head and hope for the best. But that same person should be more vigilant and go the extra mile by side stepping and staying out of harm’s way since weaponry can be fatal.

Remember, a block is the last defense and one that is not usually put into effect until all other avenues of protection have failed. The failure to get out of harms way, deflect and or block the weapon is mainly caused by the person’s inability to recognize danger before it is too late. The more one understands the concepts of protection, defense, focus, timing, rhythm and balance the easier it is for them to recognize oncoming strikes and acting on them before they become too close for comfort.

With this concept understood you should know that you must be out of the way of the weapons path. It is now our endeavor to instruct you on the “ins and outs” of protecting yourself against an opponent who is wielding a dangerous weapon.

To successfully compete against and hopefully best an armed opponent without a weapon you must first think of utilizing large amounts of energy. That is, to be “the fastest you can be” within the guide lines of balance and focus. Most people do not understand the depth of weaponry and neglect to realize that even if you think about all the movements and techniques you must physically practice them over and over until rote memory sets in. Moreover, most people refuse to learn to such a heightened plateau because they find it is too challenging for them mentally and physically.

But, for those who want to go full circle and be able to defend, fight or compete with or without weaponry they must learn to integrate the theories and techniques at full speed….and that is, if you use simple blocks and deflections with a weapon you must also follow those same basic moves without one. The person who does not have the luxury of having a weapon in their hands must compensate for that fact by being faster than their attacking opponent. They have the choice of either running for safety, attacking first or countering thus giving them the upper hand for that brief moment.

That brief moment or “window of opportunity” is short lived therefore; you must go in for the shot, point or kill without hesitation and unwavering focus, speed and energy. Anything else would put you into difficulty and most people wielding a weapon will not offer you a second chance to get the upper hand.

It should be noted that fancy movements will not work on an opponent who wants to win the match or take your life. Your defensive movements should be simple, to the point and executed with perfection in order to achieve the desired results.

The length of the weapon also determines how your body must move and function in any situation. Short range weaponry requires one to get in and out of their circle of influence with equal speed and agility while not sustaining any injuries in the process. Long range weaponry requires that most of your energy be used to “bridge the gap” getting past the ends and into the target area. The most dangerous areas on a long range weapon are at the front or back ends. Shorter-range weaponry keeps you and your opponent in each other’s circles of influence or very close to it. The longer your opponents weapon is i.e. spear, staff etc., the more energy your body has to produce to create more speed, focus, balance and power to effectively move into their circle of influence.

For example: the spear or bladed halbreath are very formidable long-range weapons which are very difficult to get past without wielding your own weapon. But, if you are able to get past the sharp ends and more than half way down the weapon’s shaft you would now have an advantage since the handle is far less dangerous than the tip or blade. If, and when, struck by the handle or back end of the staff or spear that strike will not be as strong and injurious. The shorter the weapon’s range i.e., knife the more dangerous it becomes when in each other’s circle of influence. That is why it is best to keep superfluous movements down to a minimum while increasing your speed and force in and out of the target area.

To begin preparing the body to move accordingly with an opponent one must work on the 20 basic techniques depicted in this manual involving the four general areas of the body. There are very similar to the 20 techniques one also learns for using weaponry. Note: When up against a weapon without your own weapon speed, agility rhythm, and focus are your best friends while fatigue is your worst enemy.

Jeet Kune Do Knock Out Potential: Developing JKD Power in Your...