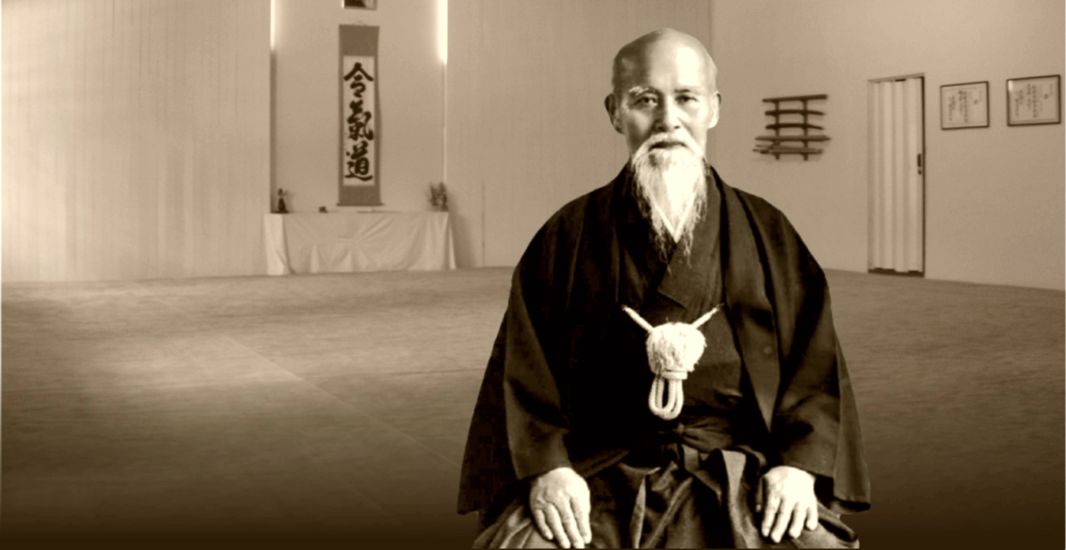 Aikido was founded by Morihei Ueshiba (1883-1969) in Tokyo, Japan in 1942. Ueshiba was born in a rural area of Japan near Osaka and left home in his late teens for Tokyo to seek martial arts instruction. Ueshiba was heavily influenced by Daito Ryu AikiJu-Jitsu – a traditional martial art that dates back 1200 years, as well as several styles of Japanese fencing (Kenjutsu), spearfighting (Yarijutsu), and by the religion Omotokyo. Prior to 1942, Ueshiba called his art “Aikibudo” or “Aikinomichi.”

Largely because of his deep interest in Omotokyo, Ueshiba attempted to cultivate a “spirit of loving protection for all things” rather than techniques for achieving physical domination over others. He organized Aikido; his own system, and established the principle of nonresistance, the non-violent way of self defense. The name Aikido means “The Way of Harmony with the Ki” (life force) and stresses the harmony between mind, body and spirit.

He then began teaching selected pupils, some from noble families, others from the armed forces. He continued his instruction until World War II when he returned to the countryside. Witnessing his countrymen turn their interests from spiritual to material matters, Ueshiba eventually decided that he could encourage a rebirth of the spirit through the medium of Aikido. With that thought, he selected his finest students and sent them to spread Aikido throughout the world.

There are several major variants of Aikido. The root variant is the “aikikai.” Aikikai is the name given to the central dojo of Aikido in Tokyo, Japan. The chief instructor is Kisshomaru Ueshiba, Morihei Ueshiba’s son. The Aikikai also houses the headquarters of the International Aikido Federation which has branches throughout the world and which oversees the dissemination of Ueshiba’s Aikido. With his death in 1969, the development of Aikido was taken over by Kisshomaru. He presides at the general headquarters and the International Aikido Federation, representing all the countries of the free world. Through this organization, the quality of the art and the black belt ranks are strictly regulated.

The teachings of the Daito Ryu AikiJu-Jutsu continues today. Tokimune Takeda was the head and  headmaster in Japan and passed this on to Kondo Katsuyuki. Kondo Katsuyuki is the only individual to have received the menkyo kaiden (license of full transmission) from Takeda Tokimune, and as such continues as the leader of the Daito-ryu Aikijujutsu.

The Origins of Aiki Ju-jutsu

It is believed that the traditional Japanese martial art Daitoryu originated within the family of Emperor Seiwa who reigned from 858 to 876 AD. In the eleventh century, a descendant named Shinra Saburo Minamoto no Yoshimitsu advanced the art through the study of human anatomy. He dissected the bodies of war dead and executed criminals to develop effective strikes, holds and joint locks which he incorporated into his family’s martial art. His eldest son, Yoshikiyo, moved to the village of Takeda in Koma and there the Daitoryu tradition was handed down within the Takeda family for generations.

Near the end of the 16th century, Kunitsugu Takeda moved the family’s main base to the Aizu district. There the art of Daitoryu was secretly taught to the Samurai until the fall of the Shogunate in 1868.

It was Sokaku Takeda, in the 19th century, who began teaching Daitoryu to the public. He was born in 1860 and learned Daitoryu from his relatives and from the last minister of the Aizu region – Tanomo Sigo (1830 – 1905). Sokaku Takeda had also studied other martial arts and he incorporated his knowledge of these plus his practical experience into the Daitoryu which he taught to select groups of military officers, police officials and aristocrats. Although he had many students (some estimates are as high as 30, 000), he issued approximately 20 formal teaching licenses.

Sokaku Takeda was the 35th Grand Master of the Daitoryu tradition that had stemmed from Kunitsugu Takeda. His son, Tokimune Takeda, succeeded him as headmaster. See the Aikido World web page for a discussion of current leadership of the style.