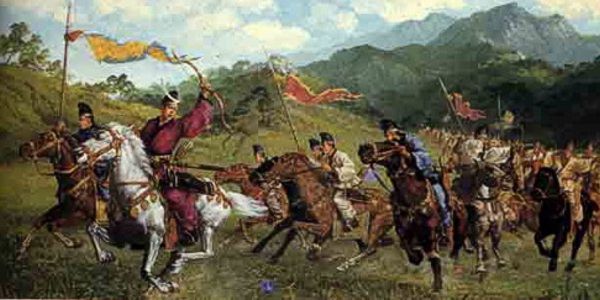 The History of Tae Kwon Do is two thousand years old and the martial art form originated in Korea. It is based on the premise that every person has the instinct to defend himself or herself against a sudden attack. As a result of this basic instinct, the origins of Tae Kwon Do date back to the earliest days of humanity on earth.

Evidence of Tae Kwon Do’s past can be found in oral history and artifacts from Korea’s three early kingdoms. These three kingdoms were called Kokooryo, Baekjae and Silla.

The Kokooryo Kingdom was founded by Kojoomong in 37 BC. Kojoomong became known as King Dong Myeong Sung. This kingdom lasted until the year 668 AD. An important Tae Kwon Do tradition of Senior\Junior relationship was first established between the years 53 and 165 AD. The phrase, “Respect Senior or older, love Junior or younger,” was deeply rooted in the minds of the people of the Kokooryo Kingdom and became a part of the Korean cultural tradition, especially in Tae Kwon Do training.

Other evidences of Tae Kwon Do as an ancient martial art have been found in mural paintings on royal tombs. These tombs date back to the Kokooryo Kingdom. In the mural of Mooyang Chong, two men are in sparring positions. A man poses in a Tae Kwon Do basic form in Samssil Chong’s mural painting. In Don Soo Myo’s mural painting, another sparring pose was found. Historians date these murals between the years 3 AD. and 427 AD. These paintings place Tae Kwon Do two hundred years ahead of the Chinese martial art form practiced in the Shaolin temples.

The Silla Kingdom was founded by Park Hyuk Kusae in 37 BC. and lasted until 935 AD. Although the Silla Kingdom was the smallest of the three and a primitive society, this kingdom influenced the beginnings of Tae Kwon Do. A selected youth military organization called the “Hwa Rang Do” practiced a systemized and innovative martial art form called Tae Kwon Do along with their regular institutional curriculum. Later, the Hwarang was chiefly responsible for the victories that led to the unification of the peninsula during the Silla Dynasty. The meaning of “Hwarang” is “Flower Knight,” and this group was organized by King Jin Heung in 567 AD. The instructor of the “Hwarang” youth was the monk Won Kwang Bupsa. He was also the author of the now famous Sesokokye, the following five commandments.

These commandments became a basic way of life for the Hwarang, giving values and principles for living to those involved in Tae Kwon Do training.

The third king of the Silla Dynasty, Yoorie, sponsored Soobakhee contests. Those contests were predecessors to modern day Tae Kwon Do. At that time the contests were seen as ritual festivals whose purpose was to provide an opportunity for prayer for the welfare of the nation. As a result of these religious festivals, the statue of Keumkang Budda, located in the old capital of Silla, is another strong evidence that Tae Kwon Do was practiced in the Silla Kingdom.

Baekjae, a tribe which fled from Kokooryo, settled in the Han River Basin. The leader, Onjo, unified all the existing tribes and formed the ancient kingdom of Baekjae in 18 BC. As in the other kingdoms, Tae Kwon Do played a big part in national defense. The Soo Sa system of Baekjae (closely compared with the Hwarang do organization of the Silla Dynasty) participated in the defense of the Baekjae Kingdom. During this time, another predecessor of Tae Kwon Do, SooByeokTa, a famous folk event, occurred among the villages of the Baekjae Kingdom. The winner of the contests sometimes became the leader of the village or a military general.

Koryo was founded by Wang Keon in 918 AD. In the book Record of Koryo, Tac Kwon Do was first called Soobakhee. It was very popular among the Koryo people. The kings of Koryo liked to watch Soobakhee contests and awarded prizes to the winners.

Kookjakam, the national university of Koryo, and the highest educational institution at that time for Confucious followers, propagated and systemized Soobakhee to its highest level. During the Koryo Dynasty, trade with all parts of the world was starting to flourish. This exposure to the rest of the world enabled cultural as well as product exchanges. SooBakhee was one of these exchanges. Foreigners were attracted to this martial art form, and historians tell us that from this time on, the Korean martial art form began to spread to the outside world. The Koryo Dynasty was also renamed Korea by those who came to trade.

The last dynasty of the era was the Lee Dynasty. It lasted from 1392 to 1910 AD. SungKaeLee founded the country of Chosen and later became the first king. His new name as king was Tae Jo. It was during the Lee Dynasty that SooBakhee became the people’s martial art. The book, Mooyae Doba Tongjee, (the first martial arts text book) explains the scientific approach to establish this art in Korea after its creation and development. This book provides detailed hand drawings of each Soobakhee technique as well as a clear description of the principles of the art. The book was published by Deok Moo Lee and Jac Ka Park during the reign of King Jeong Jong in 1790.

Historians have established that Tae Kwon Do is the oldest form of martial art in the world, and that it began in Korea. Throughout the history of Korea, Tae Kwon Do has been called by several different names: Soobak, Soobakhee, Soobyuk, Takkyeon, Beekaksool, Soobyukta and Kwonbub. Tae Kwon Do has continued to grow and evolve as it was handed down from generation to generation. During the end of the Lee Dynasty and during the Japanese occupation of Korea, Tae Kwon Do appeared to fade away, but the Tae Kwon Do spirit in Korea never died. Tae Kwon Do started to revitalize itself with the restoration of Korea’s independence after 36 years of Japanese occupation Since that time, Tae Kwon Do has spread to almost every corner of the world. It has enriched lives, provided physical and spiritual discipline, and perpetuated a sense of tradition and values that are necessary for a strong society or spiritual discipline.

The Martial Art of Yudo

USAdojo - September 5, 2010
We use cookies to ensure that we give you the best experience on our website. If you continue to use this site we will assume that you are happy with it.OkRead more