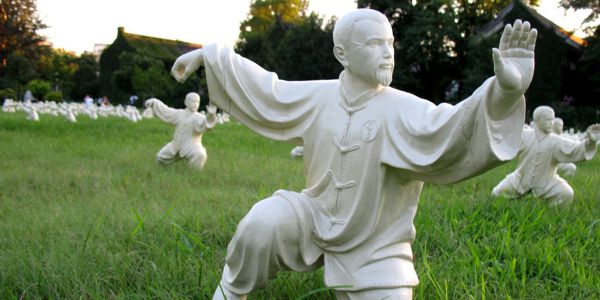 Regarding Falun, if you look at their situation, you have to realize that they are at least partly to blame for their troubles in China. There are dozens if not hundreds of styles of qigong in China. Some of them make some pretty astounding and unbelievable claims. I know of one guy who claims he can transmit qi over phone lines and that he had done so for various world leaders including Clinton, for instance. Yet China chose to brand Falun a cult and order it shut down. It was only after these guys started protesting the decree that the imprisonments began. I’m not saying the beatings and jailings are the right thing to do, but why, out of all the qigong schools and esoteric practices in the country, were these guys singled out?

As for Scientology, I guess this summer has been an interesting one in that they’ve gotten a lot of national/worldwide media attention. The navy uniforms are pretty freaky. One of my co-workers, a former Angeleno, is pretty bitter about the couple weeks he spent checking out the group.

Taijiquan is a pretty good thing to learn, though it’s important to check around and do your research to make sure you have a good, authentic teacher and not someone whose just an ex-hippy granola guy. Even if you’re not looking for a combat system, finding a Taiji teacher who can convincingly show that he knows how to use Taiji as a martial art is a good test, since that means he’s complete his training.

As to your questions about Xingyi, it is purely an internal art. In fact, it’s one of the big three internal arts, along with Taijiquan and Baguazhang. Xingyi is the oldest one, then Taiji, then Bagua. If we think of the internal arts as those that emphasize training, developing and using muscles that are not usually trained or even necessarily under conscious control in order to generate “internal power”, then xingyi specializes in developing a kind of power in which every part of the body explodes at once into one focused point each time you strike; taiji specializes in using every muscle/muscle group/joint as a link in a chain, generating power via a chain reaction (think of an energy wave that picks up power increases in amplitude the further it goes along). And bagua emphasizes power generated through coiling and uncoiling motions. The power generation methods are pretty evident in beginners, but it becomes more and more internalized and casual-looking as you get better – though I’m sure if a guy took his shirt off before demonstrating and you looked closely, you’d see how it was done.

From a fighting strategy/philosophy standpoint, xingyi is very aggressive: strike first, be direct, always advance, and strike repeatedly until opponent is down. It’s very much like wing chun in that way, and a lot of its techniques on the outside look like variations on wing chun arrow-step punching and pak sao’s. Taiji is about harmonizing and absorbing incoming attacks and using them to fuel your counterattack. And baguazhang is about evading and coiling around your opponent and his attacks, disorienting him and coming at him from all sides.

In truth, you can find aspects of all three strategies in each one, and also in wing chun. Taiji harmonizing is a bit (but not completely) like the hard-soft we use in chi sao, while bagua evasions often resemble the compass, 45-degree, and side stepping we used to train.

I started training xingyi because it seemed to have techniques that looked like wing chun and I wanted to develop internal power to give my wing chun sort of a turbo boost. And it turned out the guy I went to believed in teaching all three, usually in a hodgepodge; any class would involve him teaching some aspect of one of the three arts. (This is not that uncommon). The internal power is really awe-inspiring; he demonstrated a modified clothesline kind of technique on me to show me “internal power” he stood form to form with me, put his wrist on my upper arm, pulled back about an inch and delivered a casual-looking strike, and he nearly knocked me out. My vision went completely white, my heart skipped a beat, and I was knocked 15 feet to the side. Also I developed a big, ugly, lumpy (though oddly unpainful) bruise.