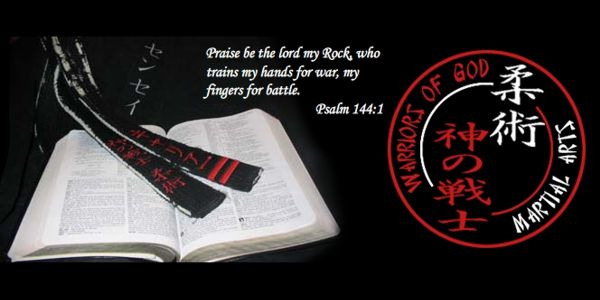 I saw a banner the other day proclaiming the existence of a Christian martial arts association and was reminded of the relationship between martial arts and religion. It seems appropriate, with the approach of a major Christian holiday, to examine the ties between these two fields.

Although it isn’t mentioned as much these days, there was a time when Christian clergy denounced the study of martial arts as a pagan or heathenish practice. I’ve met people who didn’t want to study the arts because they thought it would force them to join an Asian religion and make them give up whatever deity they grew up with.

Is there any truth to these beliefs?

In a competition-oriented school, probably not. Arts that are popular with the NHB crowd, for instance, tend to very down to earth. You learn techniques, you learn tactics and you learn strategy. Then you practice applying them. For instance, there’s nothing even remotely resembling religion in Brazilian jujitsu or Thai kickboxing.

There might be a bit of a gray area in some other arts, such as Taiji, Aikido, or some styles of kung fu. But since we’re dealing primarily here with arts that originated in East Asia, it’s important to first note what religion means to Asians.

In the West, religion typically means a deity (or, if we’re talking about ancient civilizations, deities) that must be obeyed. In return, some external reward is offered – admission into a paradise-like afterlife or worldly advantages such as success or protection. It is a bargain: obey and worship, and collect your reward. In addition, though modern society has tempered this belief, most religions actively teach that all other religions are somehow bad or invalid and should be rejected.

But in Asia, religion and philosophy are hard to separate. A true Buddhist, for example, does not pray to Buddha or believe that pleasing Buddha will reap him any benefits. Instead, he strives to live according to a set of virtues and principals – not because Buddha cares one way or another, but because he believes it is a path to a harmonious life. Buddhism teaches practitioners to not be greedy; to be kind in both thought and deed and to avoid extremes.

While fervent Taoists might believe in any number of demigods and spirits, at core, what they really believe is that the universe follows certain principals, and once you understand how to work within the system and not fight against it, things will fall into place and you’ll be happier and healthier. Taoists try to emulate nature – always keeping things in balance, never striving too hard for any one goal and reducing the importance of one’s ego in one’s actions and thoughts.

The average Asian’s religious beliefs are a hodgepodge combination handed down from generation to generation, observing a few Buddhist holidays, living by his or her choice of Taoist principles and mixing in elements of ancestor worship and Confucianism. And nobody cares or gets offended.

In general, religious practices are often indistinguishable from a lifestyle, philosophical or ethical choice in East Asia.

Most Asian martial arts have origins that are tied to Buddhism and/or Taoism. The Shaolin Temple was known as the home to sophisticated and potent fighting form, but it was first and foremost a Buddhist temple. Many people believe Taijiquan was invented by a Taoist sage named Zhang Sanfeng.

To my knowledge, no Buddhist or Taoist belief truly contradicts anything that is said in the Bible or Koran (though I admit that I’ve done very little study on the latter.) It is true that for many martial arts, you’ll have to understand the concept of yin, yang and balance in order to apply the techniques in a practical situation. But it’s easy to see this as a scientific principle or practical strategy.

And it’s true that at many traditional schools, there is Buddhism/Confucianism-inspired discussion of ethics and proper behavior – things such as honesty, courage and the importance of helping the helpless and disadvantaged are often stressed. What’s not Christian or anti-Muslim about that? I’m not aware of any rabbi that would object to these things.

Yet, if you asked an Asian with an incomplete grasp of Western culture or language whether or not religion and the martial arts were related, he might very well answer “yes.” In the end, though, there is nothing taught in a dojo that will clash with any religious beliefs you might have.