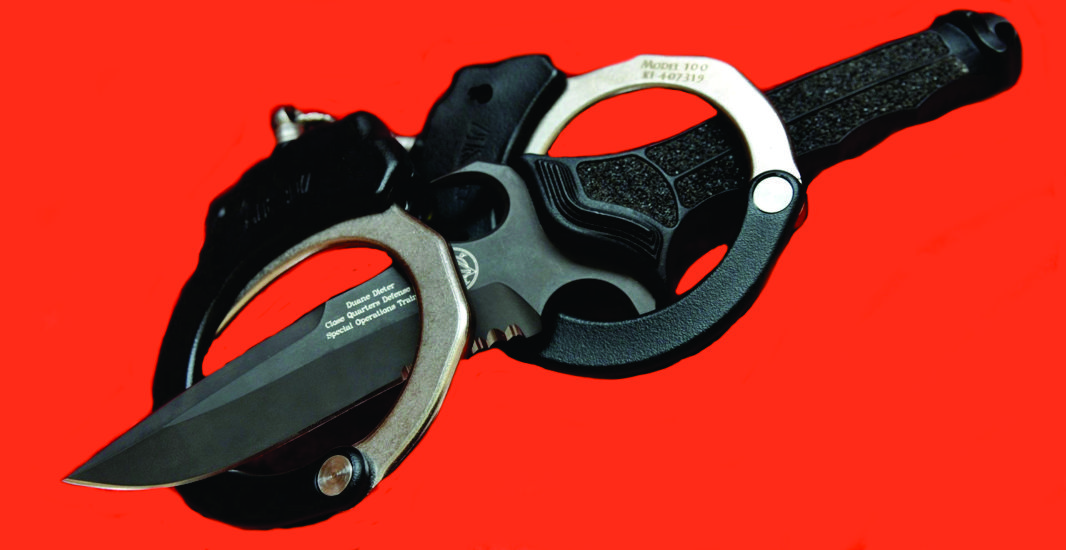 After the attacks of 9/11, I was running self-defense classes out of my martial arts academy outside of Chicago. A couple higher ups from the US Air Marshals contacted me and asked if I would be interested in sitting down with them to discuss a weapon’s defense curriculum for their agents.

The thirty minute meeting turned into an almost two hour discussion on what they currently implement, and what their needs were after the events of what the 9/11 hijackers put those passengers through. The Air Marshals explained to me that they had a decent firearms program, but needed some assistance with their hand to hand and weapon’s defense instruction, especially against edged weapons. They had heard about my expertise in the Filipino Martial Arts, which has a lot of weapon’s applications, and wanted to implement it into their program.

The Air Marshals explained that there was going to be a huge influx of new officers, some with experience and others with no training whatsoever. They needed a quick and simplified strategy to be taught to them and then could disperse throughout to their agents. Teaching the people I had this meeting with was going to be easier, as the point man was a retired Navy SEAL, and the other main assistant was a past law enforcement officer with a deep martial arts background. The challenge was teaching it quickly to those who had little to no experience and background.

Three Situations
What I am going to explain to you in this article, is how I broke down their main need, which was edged weapon’s defense, into an easy three dimensional knife defense system.  What I would like to do here is outline the dangers of edged weapons in particular, especially compared to the other two types of weapons, and focus on the three main situations which could happen.  I want to teach a very simplistic strategy on how to deal with each of these situations.

There are three main situations which can happen in any edged weapons attack:

Weapon Vs. Weapon
The first scenario, where you have an edged weapon, and so do they comes from an ancient Asian martial arts concept called “defanging the snake”. Using the metaphor, if you were to “defang” a snake, the snake wouldn’t be so dangerous. Granted, it would still be something you would have to deal with, but the intensity of damage it could do would be decreased.

Same is true with someone wielding a knife. If you were to “defang” or disarm the blade, the level of intensity would be diminished. Therefore, in order to “defang the snake” if you have a knife, and the attacker has one, we simply strike the opponent’s knife hand upon their attack. This damage or strike upon the opponent’s hand which is holding the weapon causes them to drop their knife.

Once again, the secret is not to “block”, and unnecessarily put one of our unarmed limbs in the middle of the attack, but to use a strike against the attacking opponent’s limb which is holding their knife. It is an immediate offensive and defensive move, which is what makes it so valuable. My other suggestion is to make sure that we step back when performing this move. As they strike in, we step back, giving us a little bit more time and space to cut their knife holding hand.

Unarmed Vs. Weapon
This is the situation most people want to learn about. What happens if we have an attacker who has a knife, and we are unarmed? Let me tell you that I am not going to teach you, is some multi step joint lock where you catch the attackers hand in mid air and lock up their fingers into a pretty “Hollywood” move. Those are “fine and complex” muscular movements which don’t work when you have adrenaline rushing through your system. Let me repeat, they are physically impossible to do, as your rush of adrenaline will shut down the ability to do those detailed movements.

What you need is “gross” motor skill movements which are general movements that focus on large muscle groups. I want to show you a simple three step process which when practiced against different attacks will give you a direct line to securing the attacker’s knife and taking them out of commission in close quarters, where you have the most control.

There is a three step strategy to remember when dealing with this situation, and it is: Distance, Isolate and Terminate. “Distance” means that when the attacker swings, slashes or stabs at you, you need to be far enough away to evade the knife, but close enough for when the blade reaches it’s “50% mark”, then you close the gap. This “50% mark” is hit when the slash or stab is half way completed, as this first half is when there is the most danger. Once the knife passes you, and starts to return to the attacker, then is the time to close the gap.

We close the gap, because when facing a weapon of any sort, being at a distance is where you are at a disadvantage. Being close to the opponent, and “jamming” their ability to move, where we also have access to our close quarter tools is where your greatest defense and counter attack lies. So once again, when the attacker strikes out, and performs half of their movement, then we rush in to our next step which is to Isolate the weapon’s arm. This is where we grab the attacker’s weapon’s arm with both of our hands, securing control over it.

The third and final step is to Terminate. We end the altercation not by simply seizing the arm, but by using this closer range to use our ballistic tools, such as knees, elbows and head butts. Striking our opponent using these moves will provide the best bang for your buck, increasing our leverage and damage on the opponent. My only caveat is to make sure we leave the elbow strikes until last, as we will have to release our hold in order to elbow strike. In other words, you’ve spent this time and energy getting into that close range, dodging the knife attack and securing the weapon’s arm, the last thing you want to do is to have to let go of that dangerous limb in order to strike our attacker. I’m not saying to pass up on the elbow strike as it is a powerful tool, but simply use it at the end of your strikes, softening up our opponent first with knee strikes and head butts.

Weapon Vs. Unarmed
Upon first viewing this scenario, you might wonder why a strategy is needed. Clearly you have the advantage of when having a weapon over an unarmed attacker. However, please understand that just because you have a weapon, doesn’t mean the opponent will not still try to attack you. They could be under the control of a substance, they may have cornered you or you may have to go through them in order to get to a friend or family member who is being attacked by someone else. My point is that having a specific strategy even for this scenario is a must. If it can happen, we must train for the outcome we want, with the method that is needed.

Therefore, when facing off against an unarmed attacker, assuming you have a blade of some sort, the first step is to do an “X pattern”. This simple movement does a lot in a very short period of time. First, it helps you judge the amount of distance between you and the opponent. Next, it puts the attacker on the defensive. Lastly, it has them put up their hands. For this last point, it is not necessary that we actually cut them, but if they do sustain a cut on the arms, shoulder, face or neck, all the better. The main point of having them raise their hands is so you open up another opening down low.

After the “X pattern”, we need to close the gap in order to inflict the damage we need in order to get away and escape. In order to do this effectively, you put your empty hand arm over your face, with your elbow pointing out like a spear and rush into his centerline with your knife by your back hip. This leads to the third and final step of using a “sewing machine” stabbing motion, as you thrust several stabs into the abdominal area of your opponent. Performing this movement with the arm in the rear position, will protect your knife hand, while being able to strike with near impunity.

3 Important Knife Basics For All Three Situations
There are a couple other important “notes” I want to make you aware of with these highly effective defense methods:

Knife Defense Cross Over
“Weapon’s defense” is broader than “knife defense”, but many of these concepts can cross over to other weapons. For example, “defang the snake” works for impact weapons such as batons, bats and sticks similar to knives. The strategy of “Distance, Isolate and Terminate” works in a similar fashion as well, but with any of these cross over methods, please understand there are important differences you will want to keep in mind.

The AR-15 is Not an Assault Weapon