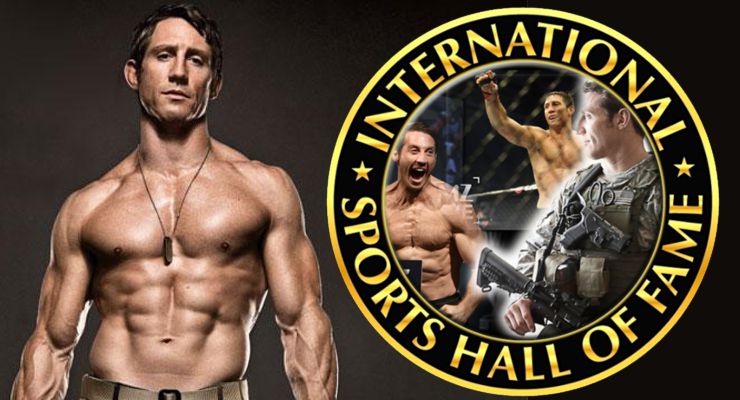 Mixed Martial artists Tim Kennedy was inducted into the the International Sports Hall of Fame Class of 2019 during the Arnold Sports Festival on Saturday, March 2, 2019, in Columbus, Ohio.

Tim Kennedy is a retired American professional mixed martial artist who most recently competed in the UFC’s Middleweight division. He has also formerly competed for Strikeforce, the WEC, ShoMMA, HDNet Fights, and represented the Chicago Red Bears in the IFL.

Tim Kennedy is one of the few fighters to serve in the United States Army National Guard while also fighting professionally. Kennedy began competing in sanctioned mixed martial arts fights while still in college, but after graduation he enlisted in the United States Army, joining the elite Special Forces in 2004. However, he continued to compete in MMA while serving as a Green Beret. When the Army instituted a service-wide Combatives (hand-to-hand fighting) tournament in 2005, Kennedy entered and won the tournament in the Light Heavyweight division. He won the tournament three years in a row.

Among Kennedy’s multiple awards are the Army’s Bronze Star Medal with V device, which was awarded for valor under fire. On April 16, 2017, Kennedy announced his reenlistment into the U.S. Army Special Forces, praising the leadership of Secretary of Defense Gen. James Mattis and National Security Adviser H.R. McMaster.

Kennedy began training at Dokan School of Martial Arts in Atascadero, California under Terry Kelly and Barry Smith. He first started fighting in 1996, amassing a record of 30–1 over the next five years. In 1999, Kennedy began training with Chuck Liddell, Jake Shields, Gan McGee, and John Hackleman at The Pit in San Luis Obispo. In 2003 he entered and won a one-night tournament at Extreme Challenge 50, winning all three of his fights. In 2004 he joined the Army. Kennedy only fought once in 2006. He then fought for the now-defunct International Fight League in 2007 and did not fight in 2008 due to Army deployments overseas. During this time he wrote a three-part series of “Letters from a Foreign Land” that chronicled his time in combat.

Tim Kennedy returned to mixed martial arts in 2009 with a win over Nick Thompson at Strikeforce Challengers: Villasenor vs. Cyborg in Kent, Washington. He followed this up with an impressive win over Zak Cummings in the main event of ShoMMA 3.

Tim Kennedy fought Trevor Prangley on June 16, 2010, at Strikeforce: Los Angeles. Kennedy won the fight via Submission (Rear-Naked Choke) in the first round.

In January 2013, the Strikeforce organization was closed by its parent company Zuffa. A list of fighters scheduled to be brought over to the Ultimate Fighting Championship was released in mid-January and Tim Kennedy was one of the fighters listed.

Tim Kennedy faced Roger Gracie on July 6, 2013, at UFC 162, he defeated Gracie via unanimous decision after defending Gracie’s submission attempts and standing up with Gracie, outstriking him.

Tim Kennedy was expected to face Lyoto Machida on November 6, 2013, at UFC Fight For The Troops 3. However, Machida was pulled from the bout in favor of a matchup with Mark Muñoz on October 26, 2013, at UFC Fight Night 30, after Muñoz’s original opponent, Michael Bisping was forced out of their bout with an injury. Tim Kennedy instead faced Rafael Natal in the event headliner. He won the fight via knockout in the first round. The win also earned him his first Knockout of the Night bonus award.

For his third fight with the promotion, Tim Kennedy faced Michael Bisping on April 16, 2014, at The Ultimate Fighter Nations Finale. He won the fight via unanimous decision.

USAdojo - February 19, 2011
We use cookies to ensure that we give you the best experience on our website. If you continue to use this site we will assume that you are happy with it.OkRead more