Home Learning Center Us vs Them Mentality in Martial Arts 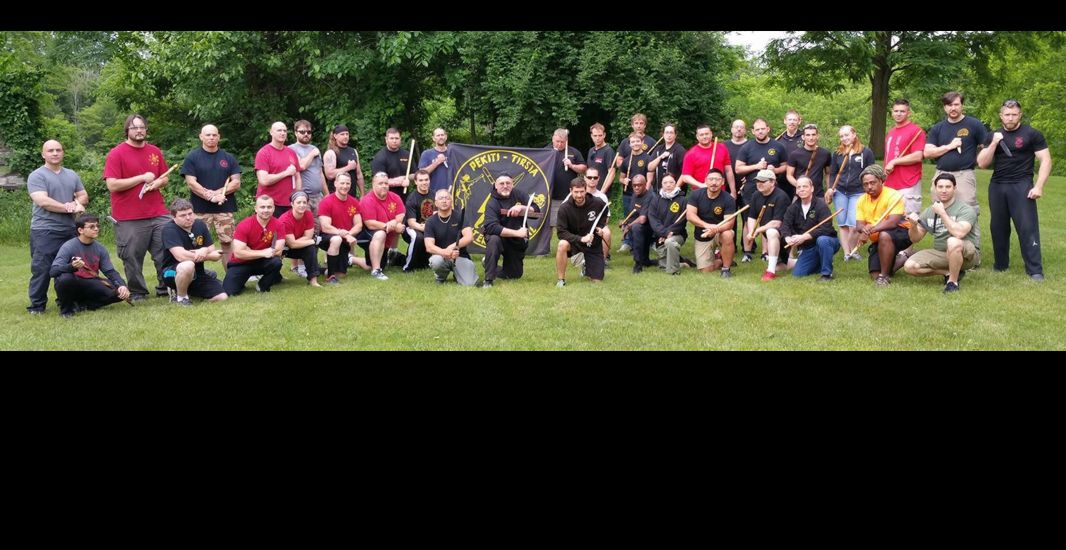 When I started training in the Pekiti-Tirsia system in 1975, I was 14 years old. It very quickly became a major part of my life. You know how it’s not unusual for boys that age to get REALLY involved in a sport or hobby to the point of getting fanatical about it. In that fanaticism it was easy to have an “us vs. them” mentality. When arguing cars or sci-fi movies this is no big deal, but I think we can take it too far in the martial arts. I think this may be an instinctive holdover from millennia of tribal living, where those in the tribe were “us” and all those outside the tribe were potential enemies and therefore “them.”

Anyway, after seeing so many other students coming to Pekiti-Tirsia after having black belts in other martial arts and hearing them say how they wished they had started with Pekiti, I thought that Pekiti-Tirsia was the only martial art worth studying and really the only endeavor worth doing for any real man. My “us” back then was all Pekiti-Tirsia practitioners and their families and my “them” was everyone else on the planet.

In the summer of 1978 Tuhon Gaje met Penchak Silat instructor Eddie Jafri and had us train with him. Now my “us” had to expand as Tuhon Gaje had glowing things to say about Penchak in general and Eddie taught us not one but four different styles of this art. My “us” now included Pekiti and Penchak people. I still considered other styles of FMA in the “them” category at this time. Partly because I might have to fight them in a tournament, and partly from the influence of Tuhon Gaje, who had that remnant tribalism common to his generation of Eskrimadors that looked upon all other Eskrimadors (especially those from a province not their own) as a potential enemy and therefore a “them”. This began to change for me after I taught my first solo seminar at another FMA school in California in 1979. For the next 6 years I traveled around the country conducting follow up seminars behind Tuhon Gaje at a number of different martial art schools. My “us” began to expand as I began to gain respect for the quality of other arts and their instructors. Starting first with those who trained under Guro Dan Inosanto, then Filipino martial arts in general, then Thai Boxing, then S. E. Asian martial arts, then Chinese martial arts, I finally came to the conclusion that every martial art had something to offer if you found the right person to present it.

My “us” had expanded to all martial artists of quality, but this was really still a very parochial attitude. My attitude began to change in 1986 when I became a NY state court officer. My first assignment out from the academy was to Brooklyn Criminal Court, where for the first few months new guys like myself were assigned to the bull pen, taking prisoners before the judge for arraignment proceedings and returning them to the jail facilities. In my first month I had to deal with such prisoners as a male prostitute arrested for orally sodomizing his own two year old daughter and a drug dealer caught red handed (pun intended) dumping the dismembered and bagged body parts of his rival into a dumpster. Since then I have had to guard any number of murderers, rapists and drug dealers during their trials. I have had to guard in court members of a drug gang who literally wiped out the entire family of a rival, down to a two year old girl, and still had to try and remain emotionally detached. This week, at the courtroom where I am currently assigned the defendant was convicted of orally and anally sodomizing his girlfriend’s six-year-old daughter. On his taped confession played aloud in the courtroom he said that the little girl was really the one to blame because she “came on” to him. It’s cases like these that helped me clarify my definition of who should really fall into the “us” and “them” categories.

Now if you wouldn’t mind a personal question, just how big is your “us”?

If you believe that, if you are ever to use your martial arts training in a life and death situation it will not be in a “to the death” duel with another martial artist, but will be with a human predator intent on harming you or your loved ones, then I invite you to redefine your current definitions for “us” and “them”. It is far too easy to get into petty squabbles over “my teacher is a better” (fill in the blank … “fighter”, “instructor” or, my personal favorite for foolishness, “historian”) “than your teacher”. As if the gang of home invaders; whose game plan is to duct tape you to a chair while they gang rape your wife before slitting both your throats, gives a rat’s ass who your teacher was or who he learned from or what the “correct” name for your art really is. The only thing that will impress a member of that gang will be when you make one of his important body parts stop functioning or when everything suddenly goes black.

I would suggest that if your current definition of “them” includes any other law abiding person (including law abiding martial artists of another style) then you really have not met the real “them” and are wasting time and energy guarding against the wrong enemy.

(In the years since I wrote this, we have seen the 9-11-01 terrorist attacks upon the U.S., multiple terrorist attacks in Europe and elsewhere around the world and the atrocities committed by ISIS and other Islamic fundamentalist groups on a scale of such pure evil that it makes you wonder if the demons of Hell have been let loose upon the earth.
All of which reinforces my belief that my “us” should include anyone who does not want to do me, my loved ones or my country harm and my “them” is as simple as those who do.)