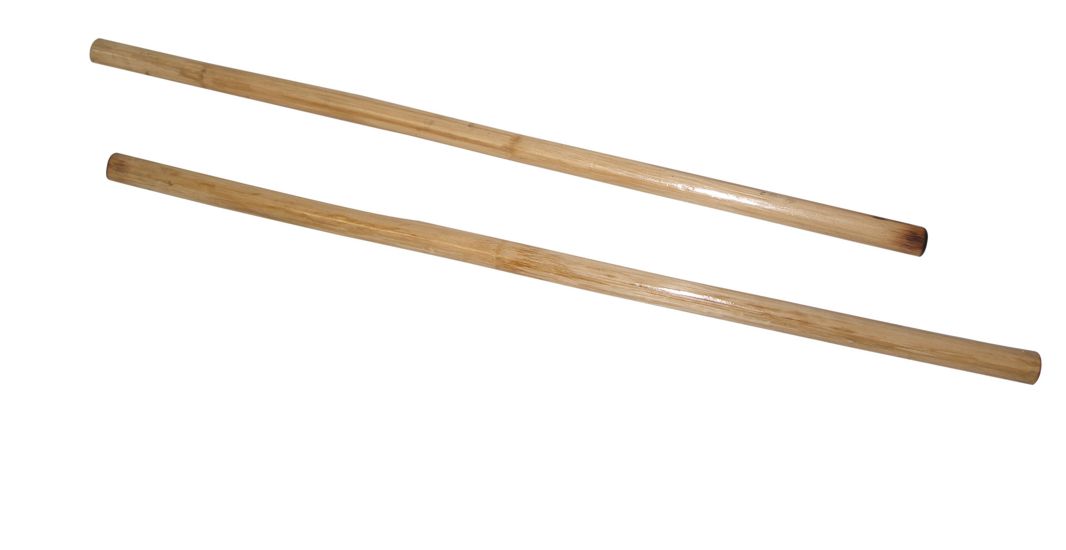 Most blade based martial arts have included wooden swords as part of their training.

The samurai had oak training swords called “bokken” and european swordsman of the Middle Ages and Renaissance used hardwood wooden swords called, (in English,) “wasters”.
The Martial Arts of the Philippines are no different, but the most common wood used for training traditionally is a vine-like species of palm known as rattan (one of 600 species of Calameae)

Rattan has several advantages over hardwood when using it as a training tool. It is much more flexible than hardwood and therefore does not transfer as much vibration into your hand on impact. Repeated direct impact with inflexible hardwood weapons can cause the equivalent of “tennis elbow” (tendinitis) in your joints and interfere with your training. Both the Japanese and European martial arts avoid this by not making hard, direct “edge to edge” contact with their training weapons, (the Japanese by deflecting, instead of directly engaging, the opponent’s weapon, the Europeans by engaging the edge of the opponent’s sword at a slight angle and then sliding down the blade). However, it is still difficult to safely spar or do reaction drills at full speed and power with hardwood weapons. The Filipinos get around this problem by using durable, flexible rattan.

You should keep in mind that rattan was used traditionally for training and sparring, not for actual fighting. For real fighting, if a blade was not used, then a hardwood weapon (preferably shaped in a diamond cross section to inflict more damage) was preferred.

In addition to Pekiti-Tirsia, I had five years of training in Pentjak Silat under Suryadi “Eddie” Jafri. As proud as Eddie was of the Indonesian martial arts, he considered Filipino sword work superior to what he had learned in Indonesia. I have long suspected this advantage is due to the Filipinos training mainly with rattan (or more accurately, by the Filipinos being forced to use rattan by the Spanish banning their carrying of swords). Being able to train at full speed and power without the danger of having your arm chopped off if you made a mistake is a huge advantage over more restrictive training. It helps you develop an understanding of distance control as well as the overall timing of the fight. Something that is difficult to master if training at partial speed with real swords.

Training with tools of different weights will help develop different attributes. Want to develop muscular endurance? Then do high repetitions with a heavy stick. However, if you want to improve your reaction time, then use light weight rattan sticks in your sparing and work hard on not getting hit, while still being able to hit your opponent.

Want to do “iron palm” training, FMA style? Train hard contact, stick on stick drills with rattan. The vibration from the sticks hitting together will travel down your stick and into your bones (but not so much as to cause tendinitis, as hardwood would). This vibration draws calcium into the bones, increasing bone density, weight and tensile strength.

Want more power in your weapon strikes? Then spend lots of time hitting “force on force” with your rattan sticks; because this is the equivalent of a boxer hitting the heavy bag. (And just like a boxer will use special bag gloves to protect his hands, you are using training sticks made of rattan to protect your joints).

Is there a downside to rattan? Aside from its cost in western countries (free from the jungle beats whatever you may be paying for it), the biggest problem I see with rattan is people staying with the same beginners’ weight stick their whole career. Beginners are going to make mistakes when first practicing two man timing drills and hit each other a lot unintentionally, so it makes sense for them to start their training with lightweight sticks that are less likely to break bones. After this “training wheels” phase though, students should be moving in the direction of using practice weapons that are the same weight and length as the tool they actually carry (be that a bolo in the Philippines, or a machete in the Americas, or a police baton).

What I see in classes in my travels though, are experienced students still using beginner weight sticks. That can make sense if a senior is practicing with a beginner to help him along (a heavy rattan will eat up a lightweight beginner’s stick pretty quickly in drills), or when sparring with friends (especially if those friends want to be fully functional at work the next day); but for the most part, advanced students should be using combat weight sticks when practicing among themselves. That is one of the reasons I suggest advanced students invest in a pair of Cold Steel Polypropylene Escrima sticks. These flex on impact like rattan (and so protect you from tendinitis) but have a similar weight to the tropical ironwoods commonly used for fighting sticks. They also last a lot longer than rattan.