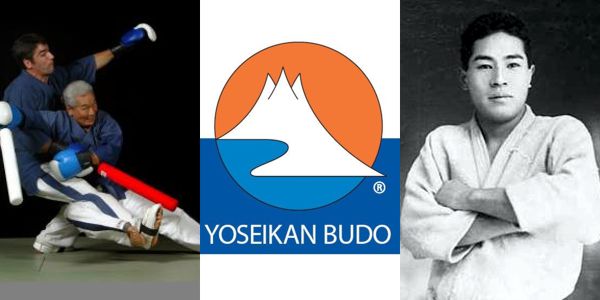 Yoseikan Budo is a comprehensive martial art founded by Master Minoru Mochizuki of Shizuoka, Japan. Master Mochizuki was a senior direct student of Judo founder Jigoro Kano, a major student of Aikido founder Morihei Ueshiba and also a student of Gichin Funakoshi, founder of Shotokan Karate. Believing that the martial arts have become distorted in the 20th century by specialization into separate disciplines and transformation into sports, Master Mochizuki assembled the major techniques of the Japanese martial tradition into a single coherent structure. Yoseikan Budo as practiced in the United States is most strongly identified with Aikido. However, Master Mochizuki’s initial Judo training heavily flavors Yoseikan with judo techniques, so that it resembles the older, broader, Aikijutsu styles from which judo and aikido were derived. Yoseikan is widely practiced in Japan and Europe but is relatively obscure in the US. It appeared in the US in the early 1970’s in Huntsville, Alabama, where Colonel Demizu, a liaison officer with the Japanese Self Defense Force, was persuaded by a group of Americans at the Redstone Arsenal to teach them the martial art in which he was skilled.

Yoseikan Budo (“the house in which is taught with courage and honesty the way of the warrior”) was founded in the early 60’s by Hiroo Mochizuki Sensei, son of Minoru Mochizuki, one of the great martial artists of the 20th century. Mochizuki Hiroo Sensei has high Dan rankings in several martial arts, among them Aikido, Jujutsu, Wado-Ryu Karate, and Iaido. Yoseikan Budo is today spread throughout Europe, Africa and the USA. The FYBDA (Federation Internacional de Yoseikan Budo et Disziplines Asimilees) is the worldwide umbrella organization, which is subdivided in national Academies and regional federations.

Mochizuki Hiroo Sensei realized that most basic techniques are based on a wavy movement beginning in the hip, which produces much more power than when movement is limited to only extremities. These basic elements are taught and applied to all YB techniques. YB consists of (modified) techniques of Karate, Judo/Ju-Jutsu and Aikido. The use of classical weapons as Bokken, Tanto, Bo, Nunchaku etc is taught as well as traditional and new forms (kata). Beginners usually study basic techniques for a year or so, including mae-geri, mawashi-geri etc, nage-waza, falls, foot-work, kata, etc. From 3rd Kyu to 1st Kyu more aikido-techniques and the use of weapons are taught. Competitions are held and consist of kata, Randori, Tanto-Tanto, etc.

There was a split of the umbrella organization in the early years, leading to a sub-style (found primarily in the UA) with the name YB that focuses primarily on Aikido-techniques.

Jujutsu: The Art of Yielding and Pliability