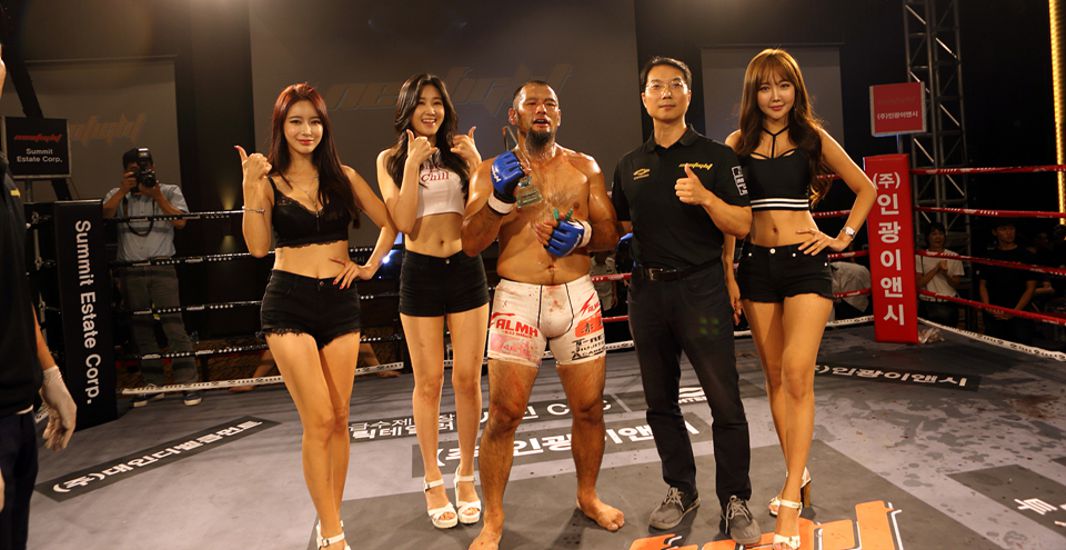 Fight fans from all over the country of South Korea were treated to the return of Sungyeel “Scott” Seo’s NeoFight on Thursday, September 6, 2018 with NeoFight 13.

Seo, a veteran fight promoter and venture capitalist, also holds the rank of 8th degree Black Belt in Hanminjok Hapkido. NeoFight was his baby from day one, however.

Neofight 1 launched in August 2003 and enjoyed success until it’s 12th event in 2009. In addition, Sungyeel Seo ran the Gimme5 MMA club from 2004 to 2007. Due to many other responsibilities looming over his head, Seo took a brief hiatus from his “baby”.

A firm believer in finishing what he started he kept to his word that Neofight would be back and he remained true to his word. This time stronger and better put together than before with a more diverse range of talent both in and out of the ring.

First, he gathered his inner circle to officiate the event from the crème de la crème in the Korean fight industry including:

Then he set the venue and the date for NeoFight 13. It was be held on Thursday, September 6th, 2018 at 7:00 pm at the Di Nozze Convention Center in Seoul.

Then he filled the ring with a mixed bag of talent from Korea, Japan and Malaysia. The fight card consisted of:

The first fight, Kang-Joo Choi vs Eun-Suk Park , lasted only 1 minute-17 seconds, as Choi choked Park and pummeled him into a TKO decision.

Myung Jae-Ook took away a win in the 1st run at 2minutes-53 seconds via a devastating roundhouse kick to his adversary’s jaw!

The third fight was anything from boring. From the outset both sides exchanged powerful punches. Min-Hyung Kim supplemented that with powerful leg kicks to the inside of the other Kim’s legs. Round 2 saw even more ferocity as the other Kim fought to regain his shot at the win. Min-Gun Kim got a nasty cut above his eye while on the bottom of some vicious groundwork but still fought on. At the end it was a difficult split decision in favor of Min-Hyung Kim. In true warrior spirit, both fighters fell to their knees and bowed to each other then hugged. A true highlight.

The 4th fight was an amazing display of Park’s grappling skills as he dominated his opponent from behind, on top and finally lying on his back pummeling the side and back of Kang’s head.

In the 5th fight Soo-Hwan Oh proved his all-round fighting skills by successfully knocking his opponent down or taking him cleanly to the ground multiple times until his exhausted opponent tapped out in the 2nd round at 3 minutes-11 seconds.

The women’s match pitted a skilled grappler vs a capable kickboxer. Despite the hype, both women were competent at all ranges in their bout. The match was a blur of ballistic punches, knees and sweeps. Su-Yoon Jung finished the fight with an impressive take down although Bo-Hyun Park walked away from the match with the win.

Another of the anticipated fights was between a famous Malaysian Chinese Muay Thai fighter, Jian Kee Chee, taking on Korean Jun-Young Hong. It was a frighteningly short bout with the Malaysian bursting forwards to be taken down by his Korean counterpart and pounded into a TKO decision at the 2-minute mark.

The 8th and final fight was the nail-biter for most spectators. Yuta Nakamura from Japan stood in the blue corner while Korean favorite Hwang-Kee Lee stood in the red. The cautious started slowly as the two veterans cautiously tossing a few jabs and the odd kick as they tried to get the feel of the other. Perhaps even in an attempt to psych the other out. It changed when Nakamura kicked the Korean to the ground and went for a pin. Soon after the two were back on their feet and, to the fans delight, slugging it out more passionately. Shortly after the Japanese knocked Lee to the ground again and wrestled him from behind. The Korean fought to reverse the position and began striking him in return. Just as he began to dominate the bout, Nakamura began to fight back as the bell rang! Round 2 was an explosion of flying fists. As a result, Lee received a nasty cut on his forehead. Seconds later the Korean leaped back into action with renewed vigor. Sadly, his wound reopened, worse than before and fell backwards. Nakamura, showing true martial arts character, rushed over to check on his opponent as the medics did. As a result, Yuta Nakamura won the match at 1 minunte-1 second in the second round.

Master Guy Edward Larke has been involved in the martial arts and interested in Asian culture for most of his life. It brought him to Korea 18 years ago where he teaches various disciplines and writes for several magazines and websites. Master Larke visits Malaysia regularly to teach seminars on Korean martial arts. He can be found on Facebook or at kisdaomuye@gmail.com.