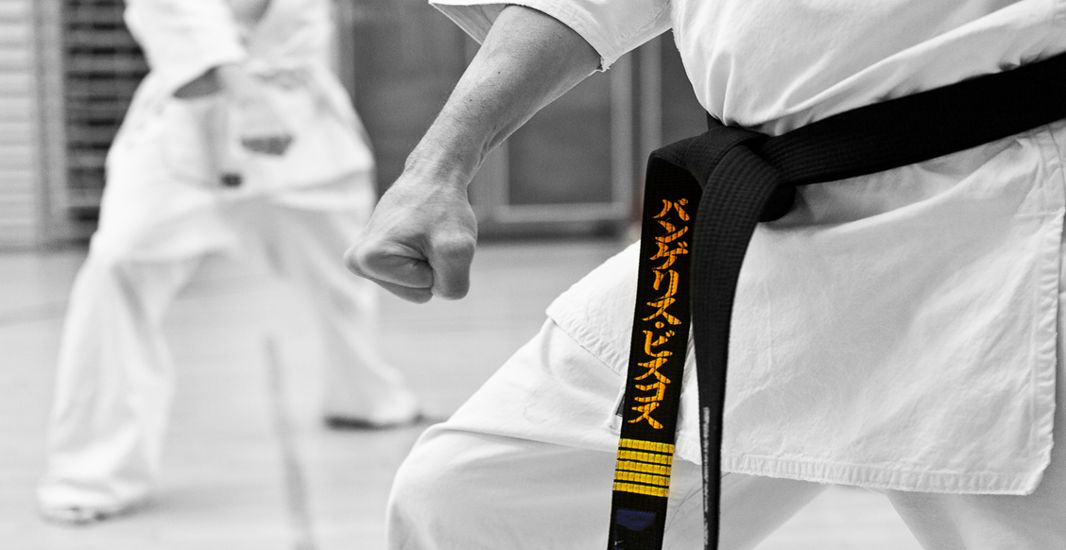 Lately I have been involved in some discussion on why kata (forms) do not appear to be bi-lateral. If you stop and think for a moment you will notice in kata you will find techniques performed only on one side of the body, or in sets of three. There are any number of techniques that are to be found in threes or singular movements. Look at Pinan 1 (Heian, Pyung-ahn) you will probably find a sequence of movements where you execute a down block and while remaining in position perform a high section knife hand block. This technique is done in only one place in this kata. Looking at this same kata you will notice there are ways to turn that we do only in one direction. At the end of the “cross bar” in the “H” pattern you pivot on your right foot in a counter clockwise direction so that your body turns in a 270 degrees. Then as you return back along the “cross bar” you will once again make a turn in a counter clockwise direction with a pivot on the right foot. Notice that you are performing this type of turn in only one direction in this kata, nor do you make this type of a turn in any of the Pinan/Heian/Pyung-Ahn kata. This kata like many others are based on a basic “H” pattern. Even those forms that do not follow the “H” pattern you are likely to find a series of three movements. Or you will find single movements in a form, many times this movement is performed only on the right side.

The apparent right side bias has always been a source of interest to me. Over the years I have heard a number of explanations of this bias. Some say “most people are right handed, therefore we practice more with our right side”. This never rang true to me, I am of the opinion if we have a weak side we should practice that side a bit more in an attempt to make both sides equal. Then there is the argument there are more vital points on the left side of the body of your attacker. Therefore, by using your right side attacks you will have the potential of attacking more vital points. While this may have some merit, a look at any acupuncture chart will show the points on the body are bi-lateral. Yes, there may be a couple of extra points on the left side of the body which are deadly but in the overall picture this logic seems flawed.

Yin and Yang are a basic part of the mind set of martial artists. We look to have both sides of our body equally trained. We expect attacks from either the right or left side or even front and back. We look at training against empty hand as well as with a weapon. Yet, in our kata there does seem to be a right side bias. How is it that we can resolve this question? Like most things that nags at the back of your mind, in a moment when you least expect it an answer pops into your mind. For me, I was re-reading “The Tao of Tai Chi Chuan: Way to Rejuvenation” by Jou, Tsung Hwa (1981). In it he quotes a book by Chen Yen Lin from the 1920’s. In it he states “Next, practice the whole set of forms from the left side using the opposite hands and feet for every one of the original postures. For example, the left hand and left leg would be used for the right hand and right leg.” (p. 218) Now I am sure I have read this section several times in the past but never given it much thought. Yet, when I read this it was like a lighting bolt hit me. I said to myself “if you start on the right side then the series of three punches will be left, right, left”. The turn that was a counter clockwise to the right now becomes clockwise to the left. The single techniques with the right side become single techniques to the left side.

Now there may be some that say “well that was a Tai Chi Chuan book and they were talking about Tai Chi Chuan not Karate”. Fair enough comment. But, let me point out this must have been a common method of practice in this Chinese form of martial art back in the early 1900’s. Many of the Okinawan martial arts trace their roots to Chinese martial art forms. At least for this one teacher he had a clear explanation of how to make his form bi-lateral. From my personal point of view I don’t believe this method of Chen Yen Lin was particular to his system. My feeling is this must have been a common practice in that time period. If for no other reason that it just makes sense to practice movements equally on both sides of the body. In fact to practice kata starting from the opposite side could provide you with a way to equal out what many of us have in a right or left side bias.

If for example we have a right hand bias we could practice the kata as we normally do one time, then run the kata two times the opposite direction to give more practice to our left side. In a class situation you would still want all of the students to perform the kata in the same direction, just for order sake. But you could allow the students time in the dojo to run their kata on their weak side several times for their own practice. Individual practice is one of the strong points of Karate, we have the ability to practice our martial arts any time or any place. If we do see we have a right or left side bias we can train to overcome this bias. Practicing kata starting on the left and then the right side allows us to develop both sides of our body equally. For me this concept answers some questions that have been at the back of my mind for a number of years.

10 Ways to Become a Kata Champion