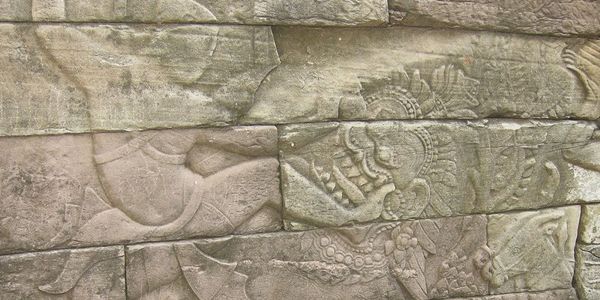 Bokator means to to fight like a lion. It is a Khmer martial art that may be a predecessor of southeast Asian kickboxing styles. History indicates that Bokator or an early form thereof was the close quarter combat system used by the ancient armies of Angkor.

Angkorian warriors were a key factor in enabling a succession of Angkorian kings to dominate southeast Asia for more than 600 years beginning in 800 AD. Popular belief is that Jayavarman VII, the ruler of the Khmer Empire, was a practitioner of Bokator.

Bas-relief carvings at the base of the entrance pillars to the Bayon, Jayavarman VII’s state temple, depict the various techniques of Bokator. One relief shows two men appearing to grapple, or possibly wrestle, another shows two fighters using their elbows. Both are standard techniques in modern Kun Khmer, or Khmer Boxing. A third depicts a man facing off against a rising cobra and a fourth shows a man fighting a large animal.

Unlike kick boxing, which is a sport fighting art, Bokator was a soldier’s art, designed to be used on the battlefield. It uses a diverse array of elbow and knee strikes, shin kicks, submissions and ground fighting. Bokator practitioners are trained to strike with knees, hands, elbows, feet, shins, and head. Even the shoulders, hip, jaw, and fingers can be used to fight an opponent to submission or death.

When fighting, Bokator practitioners still wear the uniforms of ancient Khmer armies. A kroma (scarf) is folded around their waist and blue and red silk cords called sangvar day, are tied around the combatants head and biceps. In the past it is said that the cords were enchanted to increase strength, although now they are just ceremonial.

The kroma (a cotton scarf worn around the waist) shows the fighter’s level of expertise. The first grade is white, followed by green, blue, red, brown, and finally black, which has 10 degrees. After completing their initial training, fighters wear a black kroma (scarf) for at least another ten years. To attain the gold kroma one must be a true master and must have done something great for Bokator. Becoming a “true master” is most certainly a time-consuming and possibly life-long endeavor: in the unarmed portion of the art alone there are between 8,000 and 10,000 different techniques, only 1,000 of which must be learned to attain the black kroma.

The art contains 341 different styles based on the study of life in nature. As examples, there are horse, bird, dragon, eagle, and crane styles, each containing several techniques. Because of its visually similar style, Bokator (Boxkator) is commonly wrongly described as a variant of modern kick boxing. Bokator has many forms based on traditional animal-based styles as well as straight practical fighting techniques. Pradal Serey is a more simplified freestyle fighting system which uses a few of the basic (white kroma) punching, elbow, kicking and kneeing techniques.

Angkor was a wealthy empire that dominated southeast Asia from 800 AD to 1400 AD. It was a monarchy which ruled a vast hierarchy of officials, elite, peasants and slaves and built some of the most spectacular buildings in the ancient world such as the famous Angkor Wat. The Angkorians were often at war, and often with their Cham neighbours from what is now the area surrounding Saigon in South Vietnam. Warriors fought hand to hand, thus out of necessity giving rise to a highly-developed martial art.

The name Bokator is itself possibly an indicator of the age of Bokator. Pronounced bok – u -tau, ‘tau’ translates as ‘lion.’ Lions have never been found in southeast Asia, although lions were found in western India. Indian culture and philosophy were the major influences in Angkor culture. All the great buildings of Angkor are inscribed in Sanskrit and are devoted to Hindu gods, notably Vishnu and Shiva. Religious life was dominated by Brahmins. The concept of the lion and of a martial art named ‘striking like a lion’ most likely emerged during the reign of the Angkorean kings and this concurrent Indian influence. The influence of the Brahmins diminished with the rise of Buddhism almost a thousand years ago.

San Kim Sean (English name order: Sean Kim San) is largely credited with reviving Khmer Bokator and is often referred to as the father of modern Bokator in Cambodia.

Unfortunately, during the Pol Pot regime (1975-1979) those who practiced traditional arts were either systematically exterminated by the Khmer Rouge, fled as refugees or stopped teaching and hid. After the Khmer Rouge regime, the Vietnamese occupation of Cambodia began and native martial arts were completely outlawed.

During this time San Kim Sean had to flee Cambodia under accusations by the Vietnamese of teaching Hapkido and Bokator, which he was, and starting to form an army, which he was not.

Once in America he started teaching Hapkido at a local YMCA in Houston, Texas and later moved to Long Beach, California. After living in the United States and teaching and promoting Hapkido for a while, he found that no one had ever heard of Bokator. He left the United States in 1992 and returned home to Cambodia to give Bokator back to his people and to do his best to make Bokator known to the world.

In 2001 moved back to Phnom Penh and after getting permission from the new king began teaching Bokator to local youth. That same year in the hopes of bringing all of the remaining living masters together he began traveling the country, seeking out Bokator lakrus, or instructors, who had survived the regime. The few men he found were old, ranging from sixty to ninety years of age and weary of 30 years of oppression; many were afraid to teach the art openly. After much persuasion and with government approval, the former masters relented, and Sean effectively reintroduced Bokator to the Cambodian people.

The first ever national Bokator competition was held in Phnom Penh at the Olympic Stadium, from September 26-29, 2006. The competition involved 20 lakrus leading teams from 9 provinces.

In the first Bokator national championships, there were complaints how the event hoster, Yuthkun Khmer Foundation, unfairly awarded all prizes to Phnom Penh based fighters. The complaints come from provincial based fighters. An event organizer defends that the judging was fair but provincial club leaders did not know the rules. The event organizer stated that the problem arise due to judges being trained three days before the events. Also, older Bokator enthusiasts felt that the youth’s style particularly the ones from Phnom Penh was unauthentic. They felt that they were not true bokator techniques but instead a hybrid between other martial arts.

Antonio Graceffo - October 8, 2013
We use cookies to ensure that we give you the best experience on our website. If you continue to use this site we will assume that you are happy with it.OkRead more