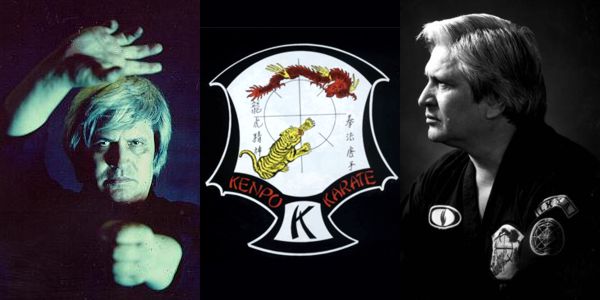 A style of Karate developed in the West. It deviates from traditional Karate in several important respects. First, the terms used are in language of the country in which it is being taught. Japanese is not the language of instruction. Also, students are encouraged to change and adapt the techniques. The school emphasizes vital point attacks using punches, strikes and kicks. Throws are also important. The art was original introduced in Hawaii by James Mitose, near the start of World War II. Later, William Chow, one of his students, adapted Mitose’s approach and “Americanized” the art. Ed Parker, who is probably the most famous practitioner, was a student of Chows and further adapted the methods so that they would prove practical in an actual fight. He created a logical organization for the basic Kenpo techniques, dividing them into eight categories., such as stances, blocks, punches and so on. These are taught in forms, in self-defense practice, and in free-style sparring. (From The Martial Arts Encyclopedia by Jennifer Lawler)

Kenpo is a mixture of five cultures (in historical order): Chinese, Japanese, Okinawan, Hawaiian (before Hawaii became a state) and American. (Hopefully Canadian will at some point be a part of that list.)

The word Kenpo is Japanese for “Fist Law” (Ken/fist, Po/Law) which in itself is confusing for this art started in China. Most people have heard of “Chinese Kenpo” or “American Kenpo.” But Japanese? (For point of reference “Fist Law” in Chinese is CH’UAN FA.)

The name is the result of centuries of development and change. Despite it’s birth in China, the art of “Kenpo” was passed down through the Mitose family who studied the original art in China in the 1600’s and brought it back to Japan. The Mitose family were Japanese, so, naturally they used Japanese to describe their family system.

James M. Mitose moved from Japan to Hawaii and the style he taught there was called “Kenpo Jiu-Jitsu” (He wrote a book in 1953 called: “What is Self Defense? (Kenpo Jiu Jitsu).

James Mitose’s second Shodan was William Chow. In 1949 Chow opened his own Kenpo club and he used the term “Kenpo Karate” to try and distinguish his system from “Kenpo Jiu Jitsu.”

In the early 1950’s Ed Parker (who was a Judo Shodan) started to take Kenpo Karate lessons with W. Chow. In 1956 Ed Parker moved to Pasadena, California where he opened his own Kenpo Karate school. Ed parker would later become the foremost pioneer of Kenpo to the American mainland. Ed Parker’s 5th and 6th black belts were Al and Jim Tracy.

**Frances Romney kindly informed me of a part of Kenpo history regarding Ed Parker, that I never knew, give it a read! ( The letter is after the Kenpo history. )**

Through the years of 1956-1960, Parker’s system of Kenpo was called “Original Kenpo” because it was identical to that Mitose and Chow taught. (Parker called his system simply, “Kenpo Karate.”) In 1961, Ed parker and Chinese Gung Fu Master, James Wing Woo co-founded, “Traditional Kenpo.”

So, Kenpo has had a lot added to it over the centuries. Please don’t take this short summary as a suggestion that Kenpo is not a “set” art. On the contrary, after so many years of development the Kenpo system knows what does and doesn’t work, because of the fact that the style has been handed down from one generation to another for hundreds of years. (They have had a lot of practice.)

Many people call Kenpo the “ultimate in self defense.” Kenpo training emphasizes a scientific approach to combat. Kenpo disables an attacker with quick, efficient techniques. Kenpo has a counter for every kind of grab, punch, strike, charge or push. The counters range from simple escapes to joint locks, brakes, blocks, strikes and joint and nerve strikes.