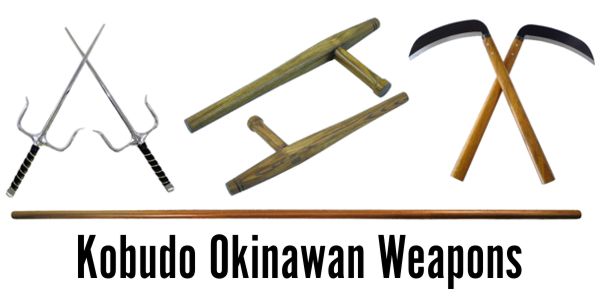 Kobudo literally means “ancient martial ways”. In the karate world, it generally refers to those traditional Okinawan weapons whose history and practice has been linked to that of karate.

Most Okinawan styles have at least some kobudo/kobujutsu curriculum. The most common kobudo weapons and the ones most often taught by Okinawan karate systems are the bo, the sai, nunchaku, the kama, and the tuifa/tonfa.

Nunchaku – two short tapered wooden clubs, connected at the narrow ends by a short rope or chain (a flail, as well as other uses).

Kama – a sickle, used singly or in pairs;

Tuifa/Tonfa – a club with a hand-length perpendicular handle, the ancestor to the police PR-24; usually used in pairs.

surujin/suruchen – a weighted chain with a spike or blade on one end – similar to the Chinese chain whip or the Japanese manrikigusari; tinbe – actually, this is two weapons…the tinbe itself, which is a small shield traditionally made of the shell of a sea tortoise, and the rochin, which is a short spear with a cutting blade – the weapon actually resembles a Zulu spear more than anything else.

kusarikama – a kama on the end of a rope or chain.