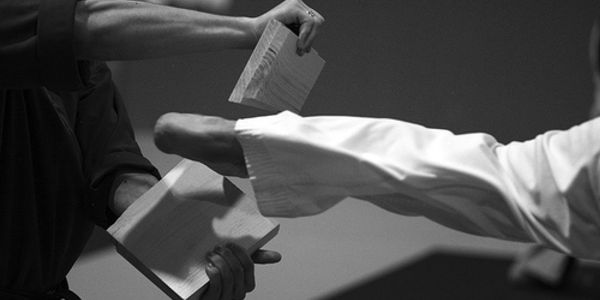 A prevailing image associated with the martial arts is that of an intense, screaming guy in pajamas screaming as he breaks a board, or a brick, or a concrete slab, or something along those lines. There was once even a karate team in Pittsburgh, PA, that got publicity by volunteering to “demolish” condemned homes with their bare hands.

There was once a time when breaking in martial arts skill was equated to fighting skill, and to this day, many traditional schools have breaking requirements for belt advancement. Breaking skill is still one of the things that most impresses people who don’t study the martial artists. This article doesn’t purport to debate whether or not you should train your breaking ability or whether it’s an even remotely useful skill to have (many fighters say “no”). It’s just an attempt to dispel the mystery.

How does one train to break stuff? There are generally two methods: the external and the internal.

The external method is very simple. Pick a semi-hard, mostly stationary object. Strike it repeatedly, but gently. The next day, do more reps, or strike it harder. Repeat until you can hit said object full force. Then find an even harder object, and start the process over again. Eventually, you’ll be able to break bricks with your bare hands.

This method is favored by most Japanese stylists. Its primary advantage is the surprising speed in which practitioners can condition their hands to the point where they can break large, impressively hard objects. In just a few months, you can see real results, and people have reported that they were able to break bricks after just six months of training.

There are several big disadvantages to this method, however. The first is that it tends to leave a good deal of ugly scarring on your hands. Look at an old Japanese karate master, or observe the knuckles of renowned Chinese kung-fu expert Pan Qingfu and you’ll see the evidence of the hard training. It’s not pretty. I guess the scarring is OK if you’re never in polite company, but if you train the martial arts as a hobby and work in, say, a law office, people will be put off by the disfiguring scars.

The second disadvantage to this type of training is that it typically involves a lot of pain. It hurts to force yourself to keep hitting the iron plate or rough-hewn tree trunk constantly, every day. And if you stop the training, your breaking ability will slowly and gradually fade away. That’s not just training, it’s a life sentence.

But it’s the last disadvantage that is the most serious. Training your hands to break bricks and boards is essentially injuring yourself on purpose over and over in order to deaden the nerves and build up a mass of protective scar tissue. Well, all those injuries take their toll. As early as middle age, many practitioners find they can’t even sign their own name, brush their teeth, or write a few letters, never mind type on a computer or play the piano. They develop an arthritis-like condition that almost locks their hands into a stiffened, gnarly state, and their hands shake uncontrollably. I once met such a master who could still break bricks – but he couldn’t eat soup because he could keep the soup in the spoon because it shook so much as he brought it to his mouth.

There is also evidence that people who train their hands and feet in this way tend to have many seemingly unrelated health problems later in life. There is no accepted Western scientific explanation for this, but Chinese doctors believe that meridians linked to all the major vital organs tend to have offshoots in the hands and feet, and when you train in this way, you damage the meridians and thus affect your internal organs.

There is another way to develop breaking ability. It is often described as an internal method, and also known is “Iron Palm” technique or “Red Sand” training or even “Iron Sand Palm.”

Again, the actual training is simple to describe. Before each daily session, a Chinese medicinal liniment is rubbed into the hands thoroughly. The actual formula tends to be closely held secret from teacher to teacher, but its effect is very similar (if far more potent) to a widely used liniment called “dit da jow” (falling and impact wine), which can be found in many Chinatown herb shops and is used to treat bruises and soreness. (Editor’s note: Dit da jow is wonderful stuff for treating bruises. There are many companies that make their own versions, and I recommend that you get a small bottle and make it part of your first aid kit, right alongside the band-aids and peroxide. Just don’t use the jow on an injury where the skin has been broken or if you suspect a bone is broken.)

Once the liniment has been absorbed, the student will be asked to hit a stuffed canvas bag in a very prescribed fashion. In the beginning stages, the bag is filled with dried peas or beans (found in any grocery store). When the peas have been ground into powder from repeated impacts (this takes quite a few months ), the bag is refilled with sand, then iron shavings (or BB pellets) and then perhaps small pebbles. In the final stages, the hands will be repeated plunged into a bucket or cauldron of heated iron pellets or sand. (It is this last stage of training that inspired the names “Iron Sand Palm” and “Red Sand Palm”).

The striking method differs greatly from that used in external methods. To begin with, the entire hand is typically trained. A typical regimen trains the palm, the back of the hand, the sharp bony point at the inside edge of the palm heel, the actual palm heel, and the fist. Some stylists also train the fingertips. External stylists tend to concentrate on just one method at a time – the fist or the edge of the hand, for instance.

Secondly (and most importantly), the strikes used in this method are far more relaxed. The arm should feel heavy, but never tense. The impact with the bag should feel as if it were caused by gravity working on a very heavy object – say, a large sack of flour – as it falls, and not the result of any intentional muscular exertion. This enables the development of relaxed, penetrating power.

After each day’s session – usually seven sets per hand – liniment is again vigorously applied. Use of the liniment before and after each training session is perhaps the most important part of internal training. Remember that all breaking training involves inflicting trauma to the hands. Internal training uses liniment to minimize this trauma; the liniment increases blood flow and breaks up clots, thus lessening the long-term effects of the repeated impacts. (Also remember that the liniment is typically poisonous, so don’t touch food or put things in your mouth until your hands have absorbed the liniment (at least an hour, preferably more) and until you’ve washed your hands thoroughly.)

There are quite a few advantages to internal-style breaking training. Firstly, the power it develops is incredibly penetrating, and (in my experience) far more applicable to fighting; it’s does more damage and can really hurt. (For this reason, people who have trained iron palm should be extra careful during sparring.) In breaking demonstrations, this power is obvious; the external stylist might scream, aggressively strike a pile of bricks, and break them all, but the internal stylist will deliver what looks like a sluggish, apathetic whack to the pile and have them all collapse. The really skilled practitioners can break any brick or bricks in the pile while leaving the rest intact. The power can be made to penetrate very precisely.

Secondly, training like this leaves no scarring or deformities. On casual inspection, an iron palm expert’s hands look no different from anyone else’s. The expert’s hands are supple, soft, and remain useful through old age. This means that if you use an iron palm method, you’ll be able to sign your own Social Security checks when you get old.

There are disadvantages to internal training however. Firstly, it takes longer to acquire breaking abilities. While an external stylist will get visible results in a couple of months, it might take a year before you really notice a practicable difference if you train iron palm. Some experts say it takes up to 10 years to go through the entire program, though most people see no need to go beyond the second stage of training (using a sand-filled bag) if they just want their hands to be toughened enough for fighting.

Secondly, iron palm training is absolutely dependent on your supply of liniment. That means finding a trustworthy instructor who has a source for the stuff or knows how to make it (and perhaps can show you how). In fact, iron palm training is absolutely dependent on close instructor supervision, unlike external training, which is mostly a matter of willpower and self-discipline. [I should warn you that there are catalogs that purport to sell iron palm liniment. Avoid these at all costs. The herbs used to make the liniment are hard to find and therefore expensive. Mass-produced versions cheap out by adding aromatics and menthols to make their stuff smell potent. But it won’t protect your hands.] If you can’t find a qualified instructor in your area, you’re basically out of luck as far as safely pursuing red sand training. Sorry.

And lastly, internal training still takes its toll on your health, albeit less than the alternative. In fact, experts warn that doing the complete training regimen, especially the part where heated iron pellets or sand is used, should be done only by those who have had all the children they intend to have, because there is a good chance that sterility can result due to damage to meridians linked to the reproductive organs. Now, I haven’t a: completed the training or b: tried to procreate, so I don’t know if it’s true or not, but it should be a consideration.

When it comes down to it, though, there’s no mystery to masters who can break bricks or blocks of ice or whatever. It’s just a matter of having the will and knowledge to condition yourself to doing it.

Ronald Shively - October 1, 2013
We use cookies to ensure that we give you the best experience on our website. If you continue to use this site we will assume that you are happy with it.OkRead more