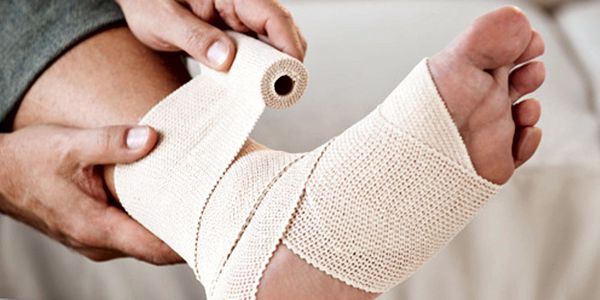 Martial arts training is largely a physical activity. In this, it can be compared to any other high-intensity sport. What that means is that martial artists are just as prone to getting hurt as other athletes.

Aside from the usual soreness and bruises that can come from any intense physical activity, most injuries in the martial arts are caused by overuse. If you are at a reputable school with a responsible, intelligent instructor, sparring-related injuries – cuts, broken bones, and such – should be virtually non-existent. This is true even in schools where a lot of emphasis is placed on realistic training. So if you train hard, you’ll likely develop tendonitis, or sprain an ankle, or pull a muscle, or something like that.

Of course it is vitally important when these happens to rest, relax, and listen to your doctor. An overuse injury is a sign that you are either working too hard, have a glitch in your form, or both. You should listen to your body and give it a rest. It can be very tempting to keep pushing for fear of being left behind or losing your edge. Don’t worry; it takes a long time for the edge to be dulled, and it’s not that hard to get it back if you’re fully physically recovered. On the other hand, if you try to train through pain inappropriately, it can lead to unconscious glitches in your form as your body continually braces for pain or looks for a way to avoid it. I know of one teacher who had hurt his hip and started training too soon. As a result, he would wince every time he threw a certain kick with his right leg. Even after his hip healed and his form returned, he would nevertheless wince – mostly unconsciously – while doing that kick. (Amusingly, his students subconsciously mimicked him, so they all wince for no apparent reason while performing that technique too!)

However, that does not mean that training has to stop altogether. You can train with your mind as well as your body, so your off time doesn’t have to be a total waste. For example, critically evaluate your form to see if it contributed to your injury. For instance, the classic wing chun centerline punch can place a lot of stress on the elbows if there is even the slightest bit of tension in the arms during training. If you’ve hurt your elbow, perhaps you should try to determine whether or not you unconsciously tense up while training. This could go a long way to helping you make progress when you can start training physically again.

You can also practice in your mind. Though it sounds hokey, studies have shown that you can improve almost as much this way as you do when you physically train. So imagine yourself doing forms, or shadowboxing, or sparring. Be self critical. When you’re well enough to step back onto the mats again, you might find that you’re actually better than you were before you got hurt!

The martial arts are as much about strategy and philosophy as they are about physical techniques. You can use the time up to catch up on your reading, and I don’t mean finally getting around to finishing “The Da Vinci Code,” either. I mean reading such strategy classics as the Tao Teh Ching, Sun Tzu’s Art of War, or Miyamoto Musashi’s Book of Five Rings. Bruce Lee read voraciously – books on fighting methods he was unfamiliar with, such as fencing or boxing, and evaluating their ideas and strategies. You don’t have to limit yourself either. For instance, I’ve gotten a lot of good ideas about focus by reading “The Inner Game of Tennis.” There’s a lot you can read that can help your martial arts training, and a recovery period is an excellent time to do this.

Of course, not all injuries require a total absence from training. If you have cooperative training partners and are careful, you can get still get a lot done while injured – perhaps more. Just as a blind man develops a heightened sense of hearing and touch, so, too can you develop other aspects of your game while you are hurt and must limit what techniques you use. For example, while Jet Li was very young, he hurt his leg and couldn’t even stand. His sifu, however, refused to let Jet idle; instead, he propped Jet onto a bench and had him practice punches and hand techniques from a seated position over and over again until he healed. As a result, Jet’s hand techniques became crisper and far more powerful.

Similarly, in the 1990s, Roberto “Gordo” Correa developed a number of new techniques for the Gracie jujitsu system while he was injured. In Brazilian jujitsu, there is a position known as the half guard: the practitioner is on his back, his opponent on top, and the practitioner has one leg outside the opponent’s body and another between the opponent’s legs. Previously, the half guard was mostly considered a transitional position, one used to go from the guard position (practitioner on his back, both legs wrapped around his opponent’s torso or waist) to another one. But Gordo injured his knee one day and was ordered not to bend it for several months. The only position in which he could safely grapple was the half guard, so that’s what he did. By the time he had fully recovered, he had developed an entire arsenal of attacks and defenses in the half guard – techniques that today are consider a standard part of the BJJ curriculum.

The bottom line is that continued rigorous martial arts training will almost always lead to some sort of injury eventually, just like any other physical activity. It’s extremely important to give your body all the time it needs to heal, despite the temptation to return too early. But just because your body is limited due to injury doesn’t mean you can’t improve as a martial artist.