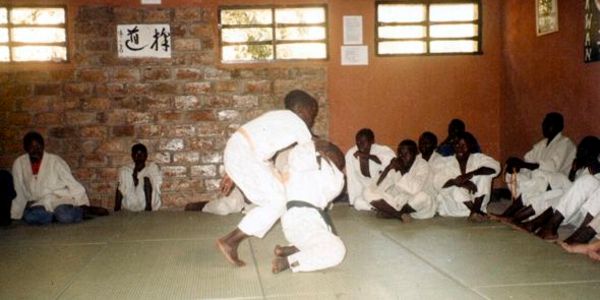 Among the underprivileged youth and orphans that I teach in our club I have a Sempai (head student) by the name of Bronson Phiri. Bronson Phiri is a brown belt 1st Kyu in Judo and Jujitsu and has been training with me for more than 10 years. I first met Bronson Phiri when he was 8 years old, a very shy and insecure young boy. His father had just died. His father was in the Zambian army and was a students of Karate in Lusaka. When Bronson fathers died his mother was unable to support her children so, Bronson and the eldest sister and younger brother were sent to their uncle, a retired police officer and ex police judo champion, who lives here in Kitwe. Bronson’s uncle, Mr. Stanford Phiri, introduced me to the three children. And Bronson took to Judo and Jujtsu like a fish in the water. Bronson is very much a part of our club, and we at the Kodokwan club have always supported him in every way possible, especially in encouraging him to continue his studies at school. Every morning Bronson walks 14 kilometers to school where he is finishing high school. His uncle wanted to get him closer to his school, so he rented a one bedroom room for him in a compound so he would only have to walk 8 kilometers to school everyday. But this compound is in a very rough part of town. The youth and grown ups in this compound are notorious for taking drugs, abusing alcohol and most are into every bad thing you can think off. Bronson was able to live quietly in this compound for 6 months without any problems and he was careful never to tell anybody that he train with us at the Kodokwan because he knew that if people knew, it could make his life in the compound very difficult.

As careful as he tried to be, the word still got out. Someone discovered that he was involved with judo and jujitsu and told the local compound gang in Zamtan that Bronson was a martial artist. On a Tuesday afternoon after walking home from school and getting prepared to walk another 6 kilometers to our club for training, Bronson found himself with 8 local gang members standing outside his house. The leader of the gang told him to follow them to the local hall, as they had something to show him. So, Bronson followed them inside the hall. When he entered the hall with the 8 gang members, they locked the door and told him to sit down. The gang then started to insult him and say that they were going to beat him up and hurt him. Then they started smoking marijuana in front of him. Bronson tried for 30 minutes to tell them that he did not want any trouble and was only learning judo and jujitsu as a discipline and not for fighting.

They would not listen to him and after they had smoked more marijuana they decided to show him street martial arts. The leader of the gang and 2 others attack Bronson and he had no option but to defend himself. The gang leader was the first one to attack him. Bronson threw the leader on the solid floor with a ippon seoinage (one arm shoulder throw). The fellow hit the ground and was knocked out. The next fellow attacked, but Bronson moved as he attacked and hit him in the solar flexis with a shotei palm heel strike which sent him down gasping for air. The third guy tried a bit of boxing, but was hit on the back of the head with a ura ken (reverse punch) and heat the floor. The 5 remaining thugs were still smoking marijuana when they released the 3 guys were down. Bronson later told me that he was amazed at how much punishment they could take. I believe this is due to marijuana drug as people don’t seem to feel pain when they are high on drugs. For the next 15 minutes, the next 5 guys attacked him and Bronson had to fight for his life. I do believe these fellows wanted to put Bronson in hospital, or worse. After the third guy went down Bronson told me that he no longer had to think about the moves, they just came naturally. He used the gang members as shields to defend himself from the others. Anyway. Soon they all tumbled out of the hall and were fighting in the street which brought the attention of the local community. Bronson’s uncle was phoned and asked to come straight away to stop his nephew from fighting. When Mr Phiri arrived he found Bronson with the 5 remaining thugs but half of them were unable to stand up properly and were threatening to get rocks and stone him. Meanwhile, the first 3 guys were still in the hall unconscious. The Uncle and the nephew made a quick escape from the flying rocks and walked home safely.

The next day the three guys were taken to the clinic and the one who was thrown was still unable to walk properly. Bronson did not tell me the story and I only heard about it 5 days later. Bronson was very embarrassed to tell me. I have always told my students to walk away from fights and to NEVER use judo or jujitsu to pick fights. Bronson was worried that I might kick him out of the club for fighting. When I heard the story, I told him that he had done the best thing he could do in that situation and that I was proud of him.

He brought tears to my eyes when he thanked me for teaching him and said that if I had not taught him he would be dead or crippled. But this is the first time one of my students fought for his life.I thank God that Bronson is with us today and healthy. He also says he believes that God truly helped him with this situation. Unfortunately after this experience, Bronson has returned home to his Uncle and now has to walk 14 kilometers to school again. If you have students in your club who are still considering taking self defence courses with you and have not made up their minds, please share the story of Bronson with them. God bless!

Putting the Pieces Together (Volume 1)

Taekwondo: The State of the Art