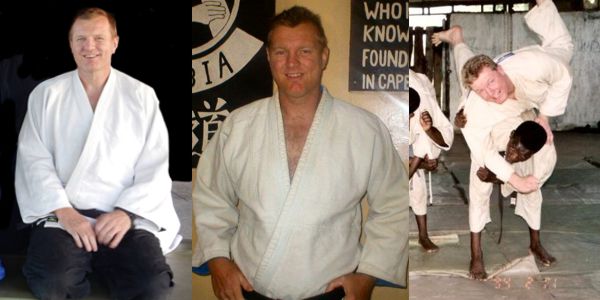 Jonathan Kruger is the head instructor of the Kodokwan Judo & JuJitsu of Zambia. Jonathan Kruger’s family first came to Africa from Berlin Germany in 1713 and moved up to Northern Rhodesia from South Africa in 1898. His grandfather was the first European to be born in Northern Rhodesia now Zambia in Livingstone in 1898. The 5th President of South Africa, Paul Kruger, was Jonathan’s great great grandfather, and a man looked up to not because he was the President of South Africa but because of his strong faith in God and his love for Africa. Jonathan first became interested in learning the martial arts in 1985 after watching the original Karate Kid movie, one of the top martial arts movies of the 1980s. He began taking Jujitsu lessons from his father, Jonathan David Krueger on their front lawn with a friend by the name of Michael Kanyemba who later became Zambian Judo champion.

Jonathan Kruger represented Zambia in Judo at the 1995 World Judo Championships in Makuhari, Japan. I fought in the 95kg + weight category against the European and number 3 world heavy weight Judo champion from Germany Frank Moller. He was also able to train in South Korea for a year in Inchon city under Grand Master Choi in Korean Yudo and Hapkido. Grand Master Choi was one of the instructors to 1988 Seoul Olympic Gold medallist Judo champion Kim Jae Yup who was famous for his high scoring Uchimata. GM Choi helped him perfect his Uchimata throwing technique.

He also trained in Sheffield, England under Sensei Keith Tiger Brown 8th Dan Judo who was 7 times Judo veteran champion of England. He returned to Zambia in 1998. He then took over the running and coaching of the Kodokwan Judo Jujitsu Club of Zambia.

Since 1998 Jonathan has worked with the underprivileged youth and orphans in his three community dojo around the city of Kitwe. His Kodokwan Dojo is like a light house to those Zambian youth who are looking for help to improve their lives through martial arts training. His Kodokwan Dojo tries to help them finish their education by helping them with their school fees. We also look for donations to get them Judo and Karate uniforms especially for those of the underprivileged and orphan students.

Jonathan also tries to look after our Zambian World War 2 Veterans. He first found these old warriors of the Kings African Rifles regiment begging at a bus station for a little food wearing their old British WW2 uniforms and medals for bravery.His heart went our to them he tries to feed and cloth them as they suffer in terrible conditions in their old age. These old Zambian warriors fought all over world in North African, Somalia, Italy, Madagascar, Burma, Singapore. And later on in Malaya against the Chinese Communists in the Malaysian Emergency in the 1950s. These old warriors need our help in their old age.