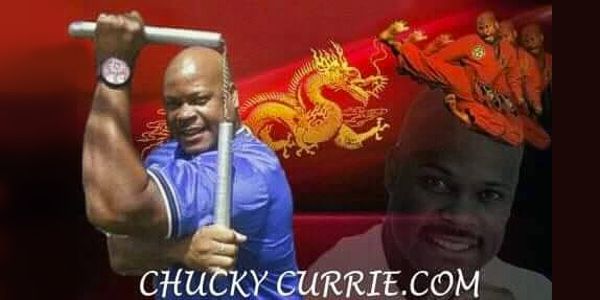 Martial artist Chucky “Quick Kick” Currie, has won more martial arts titles than most people could win in 10 lifetimes. But what do you expect from a person who started training at age 6, received his Black Belt at age 10 and has won so many forms, sparring, and weapon titles that he can only estimate the total number at “between three and four hundred.” 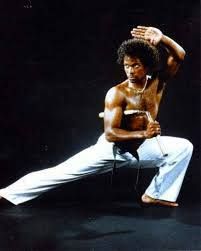 While the charismatic 30-something is legendary on the tournament circuit, it is safe to say that Chucky “Quick Kick” Currie is no target for the paparazzi. “I’m Batman without a cape, the batcar, the money, or that Robin dude,” he laughs. “I see a lot of people who used to come to watch me compete in tournaments go on to get famous and rich in the movies. At one point Chuck Norris named me the new Bruce Lee, and Bill Wallace said I was the best technician he ever fought. Dan Inosanto said that if Bruce Lee was alive he would take me on tour everywhere and make all kinds of movies with me because he would be so proud of what I had accomplished. Ernie Reyes said I was the most dynamic kicker in the USA. What can I say?” Currie asks, “I was just me and I’m glad they liked me for that. I remember once when Bob Wall saw me do a jump triple-kick in midair that he was amazed. His jaw dropped and I just laughed. It’s fun to blow people away. I’m happy for all of them that made it in Hollywood.

It’s just that I’ve never been into self-promotion and that’s what you need. But I’m learning.

Looking back, I probably should have been more into that. I think I have more titles by myself, than all martial artists appearing on all television shows combined. But if nobody knows you, the truth is that you don’t really exist. But I was just too busy loving doing martial arts to think about making money off them.” He sighs. “Plus, I guess I could have picked a bigger media center than Modesto (California), to base myself in.”

Originally from Chicago, Chucky “Quick Kick” Currie started training at the encouragement of his grandfather, who took him to his first wushu classes in Chinatown. “I just saw everyone training and it blew me away. It was the first thing I ever remember being in love with, and that has stayed with me. The movements just flowed and just watching them I could feel myself doing them. I don’t know what it is about martial arts forms and styles but they just stick in my head naturally. Even that first day, I knew that martial arts was me. I remember when I got my black belt when I was ten at the YMCA. The sensei just called me up and said he needed to talk to me. I thought I was in trouble. But he handed me my black belt instead. He said he had to give it to me – that I deserved it and that I had too much talent to not have it. But I didn’t take it for granted, you know. It was very important to me and still is. Every belt I ever received is an honor to me that I try to honor in return.”

From his traditional wushu background, Chucky “Quick Kick” Currie expanded his horizons when his family moved to California. “There was just so many places in L.A. that taught so many different styles – I was like a kid in a candy story. I trained with grandmasters Kenny Yuen in tiger taekwondo and Tom Wong in kung fu. When I was a kid my family didn’t have much money but I didn’t care. I would train in exchange for cleaning the gym, or dusting the trophies, or washing the mat. And there was always free classes at the local rec centers. At one point, as a kid, I was training at three different schools at once.”

His first tournament win was at the early age of 13 in the San Francisco Bay area. “I didn’t even know I was going to compete,” he says. “I just when there to watch and my teacher gave me a gi and told me to get out there. He entered me in sparring, forms, and self-defense and I won all three. Everyone was amazed including me. Since then, I’ve never been to a tournament that I didn’t take home a trophy from, unless I gave it to someone because I didn’t want to carry it.” Since then, Chucky “Quick Kick” Currie has won may international titles and, to this day, still competes. He won the 1998 American Black Belt Championships in soft style forms and also hard style weapons with his sword. Unlike most competitors, though, Chucky Currie doesn’t specialize in only one event he does them all. “I’ve competed in taekwondo, karate, and kung-fu and won forms, weapons, and sparring titles in them all.” A masterful technician, Currie received his seventh-degree taekwondo black belt from grandmaster Byong Yu in 1986.

The true proof of Currie’s natural martial genius, however, lies in one of his most unknown accomplishments – he is the first person, anywhere, to ever set a creative martial arts form to music. “I love music, you know. I did so much practicing that I just got into the habit of putting on music when I trained alone. At first I just used it as background music to keep from getting bored. But after a while I just naturally started moving in time to the music. I did it so much that it didn’t seem right to do creative form without it. So then, during one forms competition, I just pulled out my boom box, put in a tape and went for it. I got a lot of criticism from the traditionalists but the crowd went wild, you know? The judges just had to give me a high score. At one event I got a ten from Chuck Norris, a ten from Byong Yu, 10’s from everyone else and just one 9.9. I was hot that night – the Superstar Nationals in the Bay Area. But it was right for me and I kept doing it. Pretty soon other people followed me and then it became pretty commonplace. But I was the first.” Chucky “Quick Kick” Currie even competed against tae-bo originator Billy Blanks in a forms competition getting a first to Blanks’ fifth.

As the original innovator of the kata/music connection, Chucky “Quick Kick” Currie can legitimately be considered the forerunner of the current rage of martial arts music workouts. He shakes his had when reflecting on it. “Man, it’s like so many other things that I’ve done, you know? If I’d known there was such market for that stuff, I would have focused on it. Coulda’ taught it to people or whatever. But I felt it was just for me – something I did because it felt right. I just never paid much attention to anything that took me away from my training.”