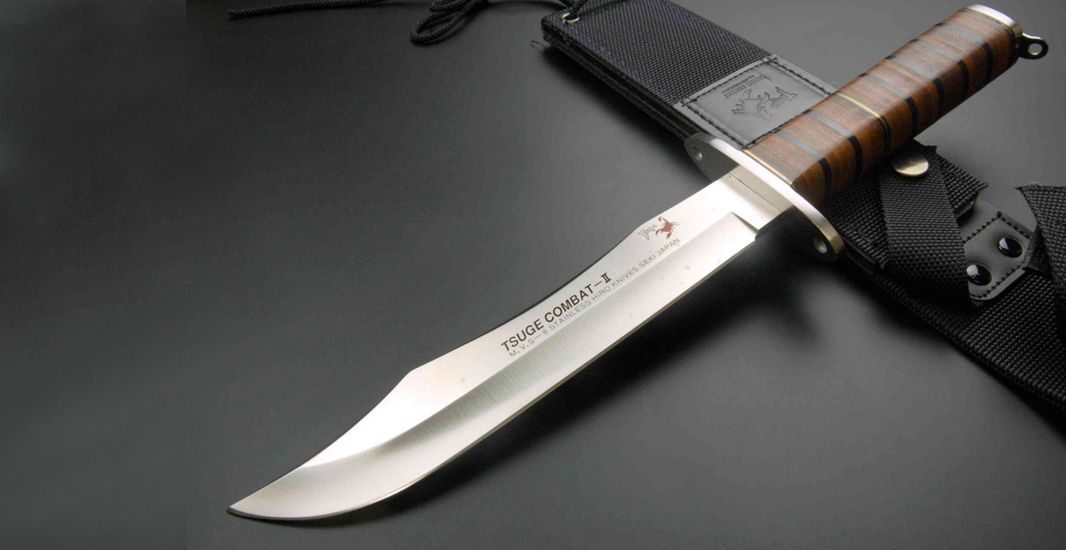 1 The Knife is Lethal
Once you’ve become involved in an altercation that has caused you to pull your knife, you need to remember that you are holding a lethal weapon. There is no other way to use a knife in a fight than to strike with fierce lethality.

If you intend to use it simply to scare an opponent, you are an idiot! Once a skilled opponent has seen you pull out your knife, the first thing he does is study its length and build. Then he will strategize how to kill you. Don’t give your opponent that chance!

Pull your knife ONLY when you’re in a position to lethally strike your opponent and the situation requires such an extreme measure. Don’t pull it if you don’t absolutely have to and never pull it in order to bluff. If you are simply bluffing, and your bluff gets called, you are in serious trouble!

2 It’s Always On
Strictly speaking, there is no “on and off” button with a knife. Sure, you can argue that an automatic folding knife has a safety lock, but once the blade is out, it’s out. There’s no reloading time, there’s no concept of ammunition with a knife. It’s always ready to draw blood.

Carry a knife that is easy to deploy in times of need. A folding knife is great, but a fixed blade is even better. In addition, make sure you carry it in such a way that it’s easy to pull out, especially if you’re carrying it inside your waistband (IWB) style.

In self-defense, the small things are very important. If you need your knife immediately, and you are having a hard time getting it out of your pocket, those couple of seconds could cost you dearly.

3 The Biggest Myth about a Knife Fight
Disarming a person with a knife is a deadly proposition for the one doing the disarming! We regularly spar with dull blades and 100% of the time, disarms DON’T WORK. If you are about to try to lock the hand or arm of an attacker, you can expect to get stabbed 5-10 times before actually being able to do so.

In addition, the only reason that you are able to lock your opponent’s hand or arm will be because your opponent is fatigued. If your opponent is well conditioned, you will never be able to disarm your opponent through any kind of lock. This is one of those things that many martial arts teach that could get you killed on the streets.

Hitting the face of your attacker with a blunt weapon, a head-butt, your fist, or your palm, for disorientation is a much better way to approach a dis-arm. But, no matter how good you are, or you think you are, prepare to get stabbed before being able to disarm your opponent. Disarming a knife wielding opponent is a very risky business!

4 The 21 Foot Rule
If you are educated in the way of the knife, you know to have a 21-foot allowance, or less, from anyone wielding a gun, in order to be able to close the gap and turn the fight into a hand-to-hand combat situation. The trick is to keep your eyes open and always be alert to your surroundings. This 21-foot rule has been proven time and time again.

5 Don’t Overestimate Your Knife
I’ve had some realistic experience in the past and I have found that there were some times where my knife would not cut the flesh deep enough to be affective. I have also seen circumstances when a knife would not puncture the flesh easy enough to finish a fight.

During those sobering moments, I realized that it is hard to stab, puncture, and cut where you want to. It was even harder to make sure that the damage is deep enough to stop your attacker. Remember, reality is not like a Hollywood movie!

Always make sure that your knife is razor sharp. A dull knife can set you up for missed opportunities, especially when it comes to damaging or critically wounding your opponent. Carrying a dull knife could cost you your life in certain situations.

6 Cuts are Overrated
While slashing moves are instinctive and natural for most of us, especially for those who aren’t use to wielding a knife for combat, in reality, it’s the stabbing that does the real damage. Slitting someone’s throat actually has a much higher survival rate than we are led to believe. It does not automatically end the fight, as seen in movies and on television. That’s because the damage is many times not deep enough to be fatal.

Stabbing someone in the femoral artery, brachial area, neck, lungs, groin, or anus, however, ensures death for your opponent. It is always easier to stab someone than to cut someone deep enough to for that cut to be fatal. There are certain areas in the body where a ¼ inch cut if fatal, and other areas where your opponent would hardly notice that cut.

7 Human Anatomy is the Key to Victory
There are only a handful of places where you can stab someone and make sure that the person ends up dead or incapacitated. The brain, and other areas that I mentioned in #6, are good examples. The femoral artery, for one, ensures immediate and excessive bleeding. This list is not exhaustive, but is a good start. I urge all serious martial artists to study human anatomy in order to understand the art of self-defense.

Stabbing someone in the stomach does not result in immediate death. In addition, the attacker has a high chance of stabbing you back. Better to strike once, and strike lethally, than to stab someone 10 times in a non-critical area. In a serious situation, don’t risk the person fighting back and wounding you, or worse, getting a fatal cut to one of your vital areas. Never take a chance when you don’t have to!

8 Hitting the Eyes is Almost Never an Option
The eyes are extremely hard to hit! Even if hitting the eyes will cause the fight to immediately end, it’s not worth trying to stab the eyes and risk getting stabbed yourself.

Human beings have the built in instinct to defend the eyes ferociously. There are much easier, and more effective, targets.

Although, if you can make your opponent blink, by faking an eye attack, that can be very affective and set up your next cut to a vital area of the body.

This is a thousand times better than actually trying to hit the eyes and miss, giving your opponent a second chance to kill you.

9 Deception is Everything
In my opinion, the best way to use deception is to try to make a quick exit. Whether you drop lines about not knowing what the problem is, not knowing the person, or not wanting to fight, use whatever means necessary for you to get out of the situation. A life-or-death situation is NOT the time to let your ego dictate your actions; don’t let your pride get you killed. Not being there is your best self-defense!

Some people even go so far as to say they are related in some way with the opponent. While it may sound funny, in a dire situation, it may just give you a few critical seconds to land a lethal blow or to run away.

It is also important to note that you cannot use the same deception twice. A trained fighter will not fall for the same feint move more than once. If you try to use it more than once, it could backfire on you in a really bad way. In fact, it could cost you your life in a bad situation.

10 You will get Cut, Prepare to Deal with it
The sooner you accept the fact that, in any knife fight, you will get cut, the better. There is almost no way for you to walk away from a knife fight without a scratch.

This is true even for the best knife fighters. If you condition yourself and are prepared to handle the damage, you will be more likely to be able to handle it.

That said, make sure that you have the skills and ability to manage and treat your wounds immediately after a fight. Learn about wound management, even as you are learning about knife fighting. Self-defense has many aspects and learning to heal yourself from the consequences of a fight is important.

11 The Best Fight is the One You Avoid
Only fight when you absolutely have to. When the situation arises, you have to be discerning enough to know whether it is a problem that you have to stand up and deal with, or if it is something you can diffuse and walk away from.

If you’re being held up for your valuables or possessions, just give them up. Material things are not worth the risk of getting stabbed in the kidney or in the gut. However, if your life, or the life of a loved one or family member is threatened, it’s time to pull out that knife and go to work, quickly and efficiently. Learn to know the difference!

Run! Running away and/or de-escalating the situation, is the best thing to do in the face of a potentially life-threatening confrontation. Condition your body in such a way that you can run fast, run quickly, and run for your life, should the need arise. This is only one reason that conditioning is important to self-defense.

12 Always Carry a Knife – Always!
Considering all the things I’ve mentioned here, I advise you to always carry a knife. Whether it’s for work purposes, utility purposes, or for self-defense purposes, a knife is a useful tool to always have with you. As far as how many you prefer to carry, that’s up to you. But make sure that you comply with the laws of your state or county in terms of knife carry length, style, etc.

In addition, make sure your knives are well maintained, preferably oiled, razor sharp, and always ready to pull out in times of need. Even if you are the best knife fighter in the world, a rusty, dull knife is of little use when your life is on the line.