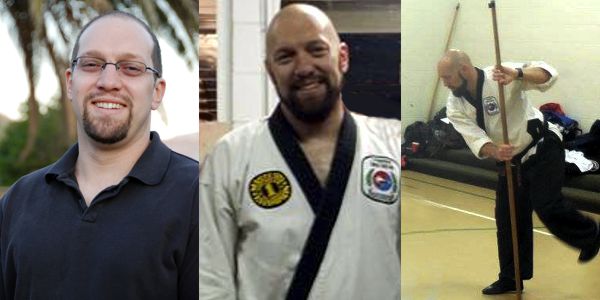 David Clark began his training in Tae Kwon Do in 1980. His parents had tired of him losing his lunch money to the local bully every day, and his older brother had tired of walking him to the bus stop to protect him. He never obtained a black belt in Tae Kwon Do, but he gained the self-confidence and skills he needed to stand up to the bully. 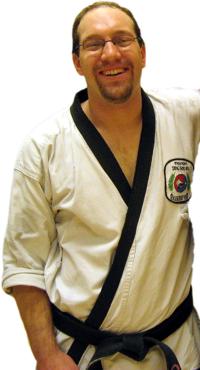 David Clark became a student of longtime family friend, Master Dick Douglas in 1988. Master Douglas, a 2004 Masters Hall of Fame Inductee as a recipient of the Golden Life Achievement Award, was a student of Master Chuck Norris from 1965 through 1990, competing successfully in karate tournaments throughout the 1960’s and 1970’s. Master Clark became an instructor at Master Douglas’s studio in 1990, and continues to teach at Master Douglas’s studio in Las Vegas in honor of his memory. Master Clark also teaches at his own studio as well (karate.dcfive.com).

David Clark earned his first Black Belt under Master Douglas in Pat Johnson’s National Tang Soo Do Congress. In 1998, he joined Master Douglas in the newly-formed Western Tang Soo Do Federation. Since becoming an instructor, Master Clark has taught thousands of karate classes, donated his time to teaching rape-prevention and self-defense seminars to a wide variety of community groups, served as a guest instructor teaching martial arts techniques and teaching strategies to other Black Belts, guided a number of students as they earned their own Black Belts, developed and published Jumpkicks between 1996 and 2007, and utilized his professional background in clinical psychology to develop avoidance techniques. He also developed and taught self-defense courses specifically for flight attendants at SkyWest Airlines both before and after 9/11.

Throughout his martial arts career, Master David Clark has remained a student, always seeking knowledge from others. Master Douglas guided his training until his passing in 2006. The Black Belts of the National Tang Soo Do Congress and the Western Tang Soo Do Federation, as well as their associates and guest instructors, have provided instruction and inspiration for Master Clark for two decades. In 2000, Master Clark began training with Masters Hall of Fame Inductees John Natividad, Wayne Wilson, and Rob Mancini, who proceeded to teach him how little he knew about sparring. His time spent with these individuals, their Black Belts, and Master Natividad’s organization have been invaluable in his martial arts education. Most of all, however, Master Clark cherishes the friendships, which he has gained over the years with students, instructors, and training partners.

David Clark competed in a number of tournaments in the mid-1990’s, generally in sparring and traditional forms. Through these tournaments, Master Clark garnered a number of top three finishes in his fighting and forms divisions, including: