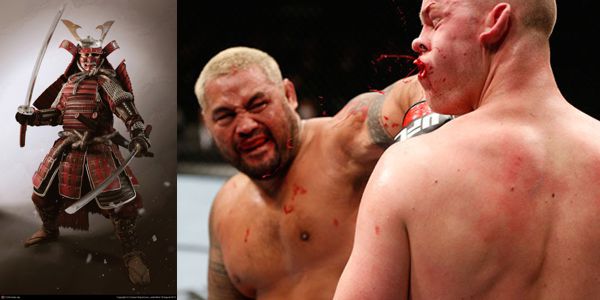 Today we face a new era in the Martial Arts with very disturbing trends in MMA circles — modern ‘gladiators’ calling for the taste of blood from their opponents. As Martial Arts teachers, we need to face this trend and deal with it each and every day with purpose. We need to discuss and explain to our students the difference between a fighter and a warrior. Many times a ‘warrior’ can be a great ‘fighter’ BUT sometimes he can be handicapped and fight each second to be alive, or have to deal with life, which can be a daily ordeal with life’s work, fighting cancer and not about fighting another opponent.

The warrior is one who has been in war – to protect and defend his/her family, his/her life, his/her home, his/her society, his/her ‘nation.’ With war, as with many things related to conflicts, there are differing laws, codes of ethics and morals that a warrior embraces and embodies. A ‘fighter’ can be a great fighter, but he/she does not necessarily embrace OR embody those same laws, code of ethics and/or morals. As an example, a terrorist can ‘fight’ well, but doesn’t adhere to the same ethics that most civilized people do. A prisoner can be a great fighter, but there are NO ‘normal’ rules in prison when fighting. This is why I don’t like when we hear in Martial Arts ‘no rules.’

While it’s true that in the street, there are no rules, but in the street we must still have a code of ethics, and adhere to a normal set of morals as we don’t aspire to kill – mercy is a quality of a true warrior.

I teach Budo, and yes, we can fight BUT that is not the point. The point is NOT to fight, but to prevent the fight, as that is truly self-defense.

In war, confrontation is the fight, but we try to avoid that in self-defense. We strive for ‘guard’ style, not bully style. We know that soldiers can be warriors, but maybe some are just fighters – do they follow the laws, the code of ethics or the morals of engagement? The SS were great soldiers, but engaged in immoral crimes against humanity. Japanese soldiers committed atrocities in Nanking China in 1937, raping, torturing and murdering over 300,00 civilians and Chinese soldiers.

This behavior is not embraced in Budo. It’s important to understand that a soldier can be a good fighter, but that does not make him a good warrior. Today we see to many ‘warriors’ – fighters without good ethics, or morals. They are not warriors, even though they may portray themselves as such in the eyes of others, but mostly in their own eyes. Mercenaries are good fighters too, but they are not warriors. They too follow no laws, nor normal code of ethics.

In the Avi Nardia Academy and through Kapap, we try to teach our students to be warriors, because it’s more important to be a warrior than to be a fighter. When I was younger, and my ego was pumped, I thought about being a good fighter, but as I got older and embraced better spirit and mind, and did not work solely on having a better body, I could see the importance of being a warrior rather than being a fighter.

A few years ago I developed the Kapap knife – along with Fox Knives in Italy. My knife was designed with warriors in mind, not fighters. My knife is designed primarily to save life, not to take life. Too many systems embrace the knife as a tool for death rather than demonstrating how it is a tool for giving life.

The Avi Nardia Kapap knife was developed from many ideas – originating from my personal history. My father was a combat paratrooper – the background color on his wings was red (as opposed to blue) signifying that he actually made combat drops. This is rare, since most paratroopers train for but do not actually deploy into combat in this fashion. As such, I grew up among the first paratroopers of the Israeli Defence Forces, absorbing their culture, history, stories, and pictures from the old days. One picture I have never forgotten – (see attached) – is that of the platoon training-knife fighting of the 1950’s, when KAPAP (Krav Panim El Panim – Face to Face combat) was the close-quarters combat system used by the IDF. As we developed Kapap and started to introduce it throughout the world to the civilian market, this picture kept popping up again and again in my mind as the reason for developing KAPAP. The picture is that of my father, which I adapted into my logo, as I carry my father’s memory and tradition. This shadow of the knife has followed me since I was a small child. I remember how my father used the knife outdoors and indoors as a heavy-duty knife.

I enlisted in the army in 1980 and was challenged to go to war in 1982. I served in a war zone for two years and the knife was a tool on my military vest. When I left the Army I gave it as a present to a friend, a Lt. Colonel. I ultimately traveled to Japan to study Japanese Martial Arts for almost 8 years and received my 6th Dan in Japanese swordsmanship and my 7th Dan in Aiki Kenpo Jutsu.

I have studied many different Martial Arts, but I always see myself as a Combat and swordsmanship teacher.  My School of swordsmanship is that of giving life. When I started to teach Combat, I noticed that many taught how to kill with a knife and would explain the knife in wrong way. You can kill with a stone. But, as I see it, the knife is the most important tool for humans. We use it for our survival every day.

By connecting my personal history, my way of life, and my principles, as well as a deep study of swordsmanship and knife fighting from the masters, I developed ideas as to what would constitute the ideal all around knife. Based on the origin of the knife, gotten from my father, and with my experiences as an Olympic fencing coach and knife fighting teacher, as well as Japanese swordsmanship, I started to design this knife, which would be the basis for a workshop we teach in KAPAP called “Only Knife”, whereby the students need take ONLY a knife and go into the woods all by themselves and survive.

The design of the knife had to be one that not only was effective as a weapon, but also must encompass capabilities to allow one to build their own shelter, get their food, water, fire, and take care of all their needs to survive. The idea is that with my Fighting knife you can not only kill but you can also save lives and survive. This is the main idea for this knife – to give life, not to take life.

One day a man traveled deep into the jungle and met a monkey. He said hello to the monkey and was surprised when the monkey returned his greeting with “hello my friend!”

The man didn’t know monkeys could speak, and so he asked the monkey about this. The monkey said, “yes we can speak, we just hide it.”

The man then said, “We humans say that monkeys and humans are of the same family.”
The monkey was really happy to meet his ‘new’ relative and didn’t stop exclaiming “my family, my family!”

Suddenly, out of nowhere a lion attacked both of them and the monkey pulled the man up into his tree and climbed high up to a safer place. The lion said “throw the man to me, and I will eat only him and I will set you free.” The monkey replied, “no way, he is my family.” Through the long night the man eventually got tired of trying to out-wait the hungry lion below, and so he asked the monkey to watch over him as he slept and said that when the monkey would go to sleep and he would watch over him.

While the man slept the lion asked the monkey again to let him eat the man, and said that he’d let the monkey go free. But the monkey replied again “No. We are family.” When the man awoke, he told the monkey to sleep and stated that he’d keep watch over him.

The monkey went to sleep and the lion asked the man to “throw the monkey down to me to eat and I’ll set you free! The man didn’t think twice, and he threw the monkey down to the lion, but the monkey woke up quickly and before the lion could set his paws on him he jumped back into the tree and climbed back up to where the man sat safely.

This was really embarrassing to the man. Both knew what happened, but no one spoke of it. Then the lion fell asleep and the monkey said to the man “let’s go!” and he walked him safely all the way back to the edge of the jungle and said goodbye.

As the man started walking, the monkey called him and said, “Can I ask you favor?”
“Yes!” the man said, happy that the monkey still considered them friends despite what the man had tried to do to the monkey. The monkey said to him “would you please not mention to anyone that we are family?”

In the past, I have been stabbed in the back by ‘friends’ and other greedy people that were too ready to sell my friendship for almost no money and I decided to simply say, “Please don’t mention that we’re family.” I have since built my own family called Avi Nardia Academy, as warriors follow their hearts and keep their values and morals! This is my family. It’s a warrior family.