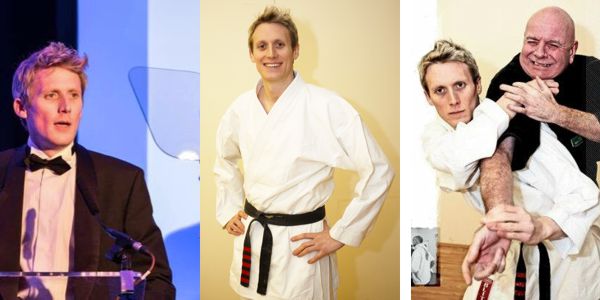 Simon Keegan is one of the country’s most qualified Karate instructors. His grades were awarded by Japanese and international governing bodies, he has trained under some of the world’s senior masters, published international research papers and is one of the few westerners to be the hereditary head of a martial arts school.

Simon Keegan is the Chief Instructor to Bushinkai and the pioneer of our self defence system. He holds the grade of 5th Dan blackbelt recognised by the World Union of Karatedo Federations (WUKF).

He has trained with some of the world’s senior martial arts masters and is an internationally published researcher in the traditional martial arts. He has decades of experience in arts like Shotokan Karate and Jujutsu as well as studying more rare forms of martial arts including Toshu Jutsu.

Simon was born into a family martial arts tradition called Bushin Ryu (of which he is now inheritor and headteacher) and started his training at a young age. His father Sifu David Keegan is a Tai Chi teacher, his uncle a Karate blackbelt, his great uncle a Jujutsu blackbelt and as far back as 1780 a branch of the family emigrated from their home in Sweden to Okinawa, making him the eighth generation of his family with a tradition in Okinawa and Japan.

Having first been taught basic Karate and Jujutsu by his father over 25 years ago, Simon joined his first club aged 10. From the age of 16 (while training for eight years with Sensei Steve Bullough in the Bushido Academy) Simon competed in Karate, kickboxing, weapons and kata, winning several gold medals at national level. Steve taught Simon a system called Bushido freestyle which was a combination of various arts including Shotokan, Budokan/Yoseikan, Wado Ryu, and Shukokai Karate as well as Aikido, Judo and Kobudo.

At the age of 20 Simon was awarded blackbelt 1st Dan. That same year he had commenced training in Tai Chi (in a club where he trained 9 years and got to attend seminars with Chinese National Living Treasure professor Li De Yin). Simon established the Bushinkai Academy in 2000. The research and development of the traditional arts of Okinawan, Japan and China (such as Karate Jutsu, Jujutsu and Tai Chi) have been at the forefront of the Bushinkai Academy since the beginning.

In 2001 Simon briefly trained in Budokan Karate with Shihan Mike Newton but his primary teacher from this point was Bob Carruthers Sensei. Simon was awarded 2nd Dan Shotokan Karate by Sensei Bob Carruthers and 2nd Dan Jujutsu by Sensei Jaimie Lee-Barron and was also introduced to the Okinawan methods of Ryukyu Kempo, Koryu Uchinadi and was awarded 2nd Dan Karate Jutsu by Nippon Traditional Kobudo, recognised by the English Karate Governing Body and the World Karate Federation.

In 2003 Simon met Sensei Bob Carruthers’ own teacher Shihan Phil Handyside, founder of Shobukan Karate (who some 10 years later would award Simon his 5th Dan). Shihan Handyside had trained with some of the world’s leading Shotokan masters including Kanazawa (who awarded him blackbelt) and was also a personal student of Budokan founder Chew Choo Soot. As well as Shotokan, the Malaysian-Chinese influenced Budokan Karate is a key influence on Bushinkai and is reflected by the influence of older Karate Jutsu systems.

While on a seminar with Aikijujutsu master Kondo, Simon was honoured by being accepted into Japan’s oldest martial arts fraternity the Kokusai Budoin (IMAF). His grade of 2nd Dan Nihon Jujutsu was ratified by Nihon Jujutsu master Shizuya Sato who was a student of Wado Ryu founder Otsuka and Judo masters Mifune, Ito and Tomiki.

Simon was also endorsed as a 2nd Dan Shotokan Karate in the division headed by Karate legend Hirokazu Kanazawa and Simon’s license was approved by the hereditary shogun of Japan, Tokugawa Yasuhisa. Kanazawa was a teacher of Shihan Handyside and so this was fitting with the style.

From 2003 Simon was also studying Nisseikai (a system of Goju Ryu Karate and White Crane Kung Fu) with Reiner Parsons and also trained with Nisseikai headteacher Tadanori Nobetsu. Simon was made a regional director of the Japanese organisation and personally assisted the UK secretary. Simon took his 3rd Dan Shoto Ryu Karate grading under Reiner Parsons who was himself graded by Shoto Ryu headteacher Ikuo Higuchi (student of founder Makoto Gima).

Simon was elected international director of IMAF GB (later the United Kingdom Budo Federation) that saw him organising an unprecedented seminar to celebrate a 50th anniversary – both of Karate in Europe and of the British Jujutsu Federation. Masters taught on the event from IMAF, Dai Nippon Butokukai and the Seibukan.

Simon pioneered a system of Karate called Hakuda Kempo Toshu Jutsu, designed to preserve the original principles of Karate (not the sporting forms) and has since had his research and articles published far and wide from magazines like Combat.

In the five years that have followed Simon has developed and honed his own skills, being awarded the title of Renshi (‘polished teacher’ awarded over two years after 4th Dan in traditionally backed fraternities) in Karate as well as the grades of 2nd Dan Judo and 2nd Dan Taiji Quan and teaching on seminars all over the country.

On December 18th 2012, Simon took a grading on the mat under Shihan Handyside and was awarded the grade of 5th Dan Shobukan Karate, the culmination of his martial arts journey that goes back some 25 years.