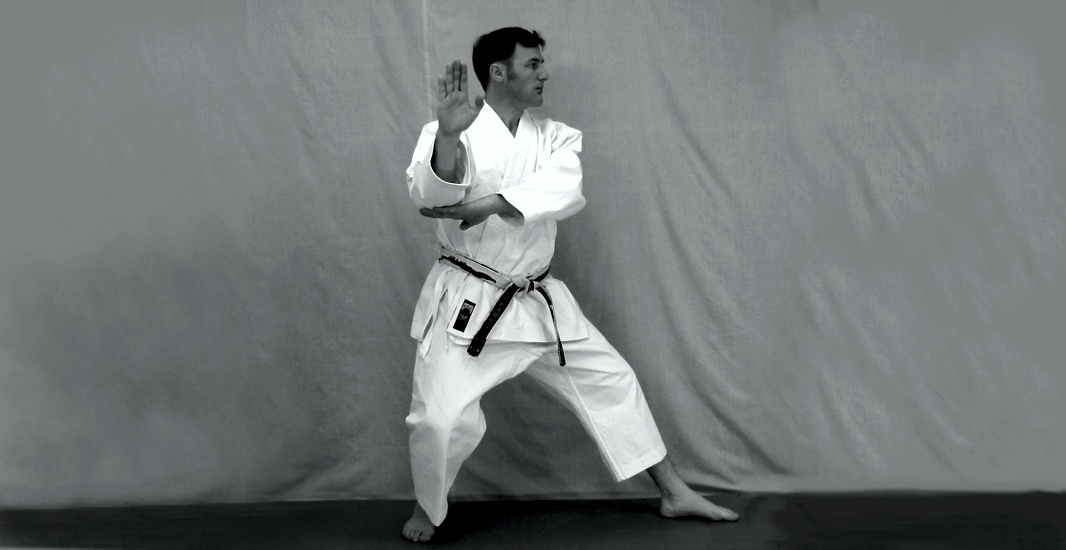 By Bill Burgar ~ Today kata are practiced for a variety of reasons. Some people use them as good exercise, some to practice technique, balance and coordination, others use them to win trophies, some to follow ‘the way’. These are all valid reasons for practicing kata. Another major reason to practice kata is that they contain all of the techniques of karate and give us a way to remember and practice those techniques. This is bunkai the applications of the kata movements.

There are many movements in our kata that are confusing. They don’t seem to be directly applicable to fighting and as a result kata tends to get side-lined and kumite and kihon take over as the dominant forms of practice. That is a shame because studying bunkai can be a very rewarding slice of the karate cake.

But how do you go about unlocking some of the applications from their apparent lack of applicability to a state where you could use them when required.

Here are some guide lines to follow when thinking about bunkai. Note that these are guide lines and not rules i.e. there are exceptions and conflicts between the various elements, however, the bunkai should broadly fill the criteria. Remember be as mentally flexible as you can to get the most from your kata.

One very important attribute for a bunkai to be workable is that it should not be reliant upon the enemy performing a sequence of actions. It should generally only deal with the first opposing movement or be preemptive. From then on until it’s completion it should give the opponent no opportunity for any choice of action. (Bear in mind the various body shapes and sizes that the technique could be used on.) Some techniques do follow on naturally from each other but anticipating beyond one or two techniques is, for all intents and purposes, impossible. Make some of your techniques preemptive. i.e. hit him before he hits you. Now that does go against the philosophy of karate-do “Karate ni sente nashi” (there is no first attack in karate). However, when talking about self defense (which is what we are doing when talking about bunkai) the philosophy has to take a back seat, survival must come first.

Next the bunkai should mostly be short range. There is nothing wrong with practising long range applications it is just that they have less probability of happening. Most of the bunkai taught to lower grades are long range. That is good because it is easier to understand and visualise. However as you progress it is good to get into the shorter ranges where most fights occur. Think more about grappling.

Most bunkai are for a single opponent who is usually attacking from the front and occasionally from behind or the side. Practicing multiple opponents looks great in demonstrations and does teach some valuable lessons but that is not what the kata was originally designed for. When turning at various in the kata think how you are turning in relation to the single existing opponent rather than moving to another opponent. Viewing the bunkai in this way often reveals an arm lock, a throw or similar technique to hold the opponent, force him to the ground and so on.

Hikite can imply grabbing the opponent and pulling them in to you. Catching a punch is very difficult but grabbing the opponents wrist when he is pushing or grabbing you is more straight forward. Using a muchimi (sticky hands) method (more practiced in Goju Ryu than Shotokan, but a useful skill to acquire) the opponents wrists may be caught and pulled or having grabbed the wrists use the other arm to strike to the opponent’s inner side of the elbow etc. Bear in mind though that if you have sweaty hands under stress, grabbing is not so easy.

The probability of the attack should be considered. What is the likelihood of an attack of a particular type actually happening. If your bunkai relies on three people attacking each with two particular attacks you should realist that the chances of it actually happening and you recognising it as such is practically nil. On the other hand if your bunkai deals with someone grabbing you by the lapel, pushing you, punching at you or you preempting his attack and so on, these are more likely to occur in a confrontation. In fact you could try looking at the types of attacks that are often dealt with in a self defense class, and then use your kata to give you the answers on how to deal with them. Again it must be stressed that there is nothing wrong with practicing things that will never be used. If you were only
practicing for self defense then of course that would not make sense but most of us practice karate-do rather than karate-jutsu. In karate-do doing it right is more important than it’s direct applicability. Having said that it is important to have a reasonably clear picture of what you are practicing for self defense and what you are practicing for the sake of it. Mixing the two up would be dangerous.

Look for places in the kata where you can “Back up a technique” i.e. reverse the “business” end of the technique. This is rather difficult to describe so here is an example from Heian Shodan. Note that the technique from the kata must not be altered. After the second kiai on the oi zuki you are about to turn to block Shuto Uke. Now imagine instead of the opponent being off to your right think of him being directly in front of you attacking with a right hand punch. Now as he attacks you spin on your right heel inside the attack (see John Cheetham’s article about tai sabaki in issue number xx) and strike your opponents arm at the wrist and elbow with a pulling motion. When done correctly this can KO your opponent (I have video tape of Rick Clark (USA) knocking people out with this technique) but that takes considerable practice! On a milder scale this works nicely as an unbalancing/throwing technique.

Use knowledge of vital points and other anatomical facts like the structure of joints to enhance the bunkai. Kata movements map out the way to strike vital points. Striking combinations of vital points (rather like the combination to open a safe) can cause strange effects in the body. Often the most curious looking techniques in kata are vital point attacks that have devastating effect. One common misconception about atemi waza (striking vital points) is that they must be pushed or pressed with the finger tips. While this is true in some cases, generally the vital points are hit with standard karate strikes
and “blocks”. Bear this in mind when thinking about bunkai.

Practice both bunkai and oyo. Bunkai are the applications taken directly from the kata and match the movements exactly. Oyo are the implications where the movement is altered in some way i.e. the kata acts like a spring board into a whole new set of techniques. For example in Heian Shodan the third move is turning behind to block gedan barai. Clearly this situation would not happen in real life the distances are all wrong. However, if you turn in the same direction (clockwise) but move the other leg going away from the opponent the distance is more workable. This is an Oyo (implication) because it does not match
the kata exactly but it takes the kata movement and uses a very similar movement to make it work.

Generally you should try to stick to bunkai rather than oyo where possible. However, sometimes if the bunkai is not known or the one (or more) that you know do not seem probable then oyo are a good substitute.

Finally, it is important that we do not get too hung up on the bunkai. As I stated at the beginning of the article Kata does have purposes other than just self defense. When we become too absorbed in the bunkai it is easy to lose sight of those other benefits. Therefore we must be careful to strike a sensible balance in what we practice – balance between the way of karate “karate-do” and self defense “karatejutsu”.

This article was written in early 1994 and published in Shotokan Karate Magazine Issue 40.

Nunti Bo: The bo with the sai on the end

The Role Of Kata For Contemporary Fighting Martial Artists