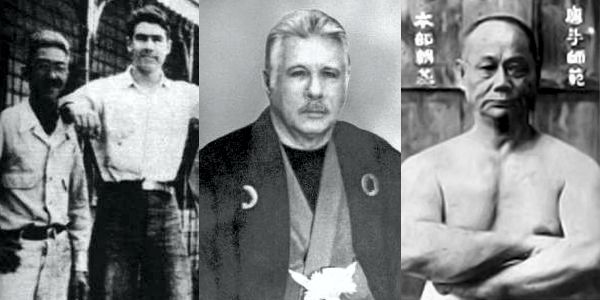 Shuri-ryu is a very old and traditional system with a long and unbroken history. From the ancient method, much wisdom has been gained and recorded.

One of the brightest stars in the firmament of Oriental thought and culture was the Indian Buddhist monk Bodhidharma. Twenty-eighth in a direct succession from Gautama, he was known by several names, such as the White Buddha; to the Chinese as Ta-Mo; to the Japanese as Taishi Daruma; and to centuries of Zen literature as the first Patriarch. In 500 A.D. Ta-Mo journeyed to the temple of Shorin-ji (Shaolin) situated in Sung Shang, in the province of Honan, where he found the monks physically and mentally unable to endure the discipline required by his teachings. This condition was corrected when Ta-Mo created eighteen exercises called I-chin-ching, which were grouped under a form of Chinese Yoga of Taoist origin. The exercises employed slow motion movements for the cultivation of chi with the subsequent harmonizing of the body and mind. Chi (intrinsic energy; Ki in Japanese) is cultivated without conscious effort or conscious breath, and dwells on the exhalation and inhalation of the soft over the hard and hard over the soft.

By astute observation, it was noticed that all wild creatures are provided with certain natural weapons. These were used for striking, clawing or snapping, with the uncanny ability to retain perfect balance when attacking or defending themselves. For example, the eagle and crane beak employed quick snapping movements; the leopard and tiger claw were associated with quick, powerful clawing movements; and the dragon’s slow but powerful crushing movements were observed; as well as many others. The stances of the various creatures were then emulated for the purpose of retaining a natural balance; and man’s natural weapons, mainly the hands and thumbs, were fashioned by vigorous training to simulate the beak, claws, talons, etc. of animals and birds. Other methods developed the limbs, hands and feet to substitute for club, dagger, spear, and other weapons. The consolidation of slow breathing exercise forms with the various forms which were copied freely from nature resulted in the 170 forms which became the basis of the Shaolin (Sil-lum) system. During the Yuan dynasty (1279-1368 A.D.) the 18 forms of Taishi Daruma called I-chin-ching were consolidated and this resulted in the formation of 72 body and fist forms. These animal body and fist forms are dominant within the Okinawan Shuri-ryu system.

It is believed that King Sho Tai of Okinawa sent Hohan (Sokon) Matsumura (1806- 1895), Master of Shuri-te and martial arts weapons, to China to increase his knowledge of the Chinese arts. Upon his return, he was appointed personal bodyguard to the king. Matsumura brought back invaluable techniques and methods from the Chuan-fa and Hsing-yi (hsing-i) systems, which at that time were the foremost accepted forms of the Chinese art in China.

Through the decade of 1874-1884 traveling monks were being robbed and killed between Canton, Namoi and Tong-king, by roving bands of robbers and cutthroats. Many of these were Chinese rebels or ex-rebels who had been driven across the frontier during the suppression of the Yu-Nan and Taiping rebellions. At the Hai Chiwang Sze Temple, Shang Tsao-Hsiang (Tsao Hsing) had studied the internal systems of Chuan-fa, Hsing-Yi and Pakua, and the external systems of Shaolin-chun and Hung-kun, from the most formidable fighters of that time, Masters Li T’sun Yi (1849-1924) and Sun Lu T’ang (1859-1932). He taught these skills to the monks to enable them to defend themselves against the highway robbers and cutthroats. The elder Hsiang died, leaving to his nephew/son T’ung Gee Hsing (Tong Gee Hsing or Hsiang) the secrets of Hsing-yi. Hsing later settled in the Chinese settlement of Kume Mura in Okinawa.

While Master Hsing lived in Kume Mura, he met Master Choki Motobu. The incorporation of their two noble systems became the basis of modern Okinawan Shuri-te and the entirety of the Shuri-ryu system as taught today. Shuri-ryu’s insistent standard is in the extensive use of bone strength. The body alignment of bone power must be present, with three or more points of muscular bone balance meeting in a direct line with the center of gravity of the body before the execution of any block or strike. Strikes are essentially circular, and the power of the opponent is also deflected in a circular motion. The system employs seventy-five percent use of hands and twenty-five percent use of feet. It is best recognized by its low Chinese horse stance (Kiba-Dachi) and the exaggerated swivel of the hips with a coil-like spring action of the body when striking. It stresses the strength of the dragon, the bone strength of the tiger, the inner and outer strength of the leopard, the hidden or spiritual strength of the crane, and the lower abdominal breath strength and power of the snake or serpent.

External breath control, with body movements incorporating animal body and fist forms, is essential before the execution of any strike. The body and limbs harden (harmonizing soft and hard) at the exact time of contact (maximum exertion), instantaneously stopping at a given point with a loud kiai. The body again becomes soft until the next strike. Three levels of blocking and striking in conjunction with three degrees of tightness and muscle tension are utilized in practice.

There are seven attacking and retreating methods (Kogeki) which are used in conjunction with eight distinctive types of attacks which can be executed in a circular fashion or a “V” formation. The reactionary striking manner, symbolic in the snake or crane, is strictly enforced in the system. When the user blocks any movements, he must react spontaneously with a quick whip like strike.

Shuri-ryu is a very old and traditional system with a long and unbroken history. From the ancient method, much wisdom has been gained and recorded. Shuri-ryu is a totally complete system, and from it have come many other systems. It stresses a synthesis of Eastern and Western attitudes toward life, and through its practice and philosophy, a great inner peace and freedom will be reached.

The Adventures of Ichi & His Friends: The Journey to Mountain Temple

History of British Karate and Jujutsu

Simon Keegan - February 28, 2015
We use cookies to ensure that we give you the best experience on our website. If you continue to use this site we will assume that you are happy with it.OkRead more