You are a martial artist, I understand. Tell me, what do you study; a “Do” or a “Jitsu”?

Everyone who studies a martial discipline isn’t a martial artist. The term “martial art” has become a generic way of referring to any fighting system, but all martial systems are not created equal. Which do you study? Do you even know?

Words can take on meanings other than what they were originally intended to convey. For instance, take the term “kung fu”. Most people, even seasoned martial artists, will tell you that kung fu is a term that describes any Chinese fighting discipline. Not so. Kung fu simply means hard work, or skill garnered through discipline or hard work. You can express kung fu in flower arranging or calligraphy.

Master Jigero Kano, the founder of judo, initially studied several styles of jiu jitsu. The style he founded, the precursor to judo, was Kano Jiu Jitsu. When he further distilled this art into judo, he removed many of the more dangerous techniques. The final product was a “do” as opposed to the prior jitsu he had initially founded. Many of the striking techniques, joint locks, joint throws and bone breaking techniques that made for a combative system were removed for the sake of safety. He wasn’t trying to invent another fighting system. The systems he studied prior to the creation of judo offered that. He wasn’t trying to recreate the wheel. He was creating an art that was safe to study and practice for people other than the samurai warriors that some of the other systems were designed to serve. That isn’t to say that judo can’t be used for self defense. I’ve seen it used quite efficiently as a means of personal protection, but this isn’t what Master Kano had in mind when he founded judo. Rather than putting together one more fighting system, he wanted to put together an art that would be a means of self improvement, self discovery and spiritual development. Thus jiu jitsu became judo. 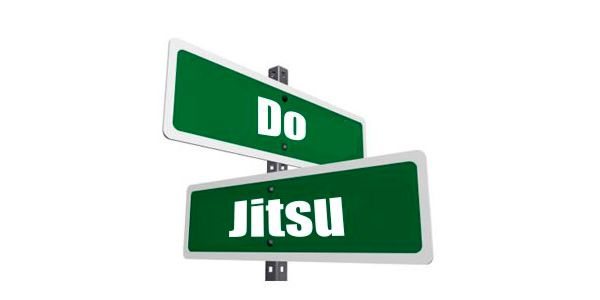 The suffix “do” is the Japanese rendering of the Chinese word “Tao”, which simply means a way, or the way, such as in a way of self discovery, or “the way of enlightenment”. The idea of enlightenment through a none spiritual pursuit is a strictly Eastern philosophy which has no parallel in Western thinking. As a Christian minister and a Christian martial artist, I can’t help but think that this is asking something of a martial art that one should be seeking from a relationship with his maker.

In the beginning, a martial system was simply that and nothing more, but when they became part of the training regiment in Buddhist and Taoist temples, it became an extension of their religious practices. Tai Chi Chaun, while originally an effective fighting discipline, is practiced as a form of chi kung exercise. In its strictest form it is a type of meditation in motion. Many of the Oriental martial systems still adhere to these practices. Some katas can even have spiritual and therefore paganistic aspects.

A real fighting system evolves with the needs of the society it exists in. It’s nice to be able to fight against a trained swordsman, but that isn’t the type of threat that most of us will face in today’s society. We are more subject to attack from objects common to general usage such as a knife, a razor, a club or a box hook or such. I’ve had to defend myself against knifes, razors, box cutters and a handgun in my life in Chicago’s dangerous streets, but I have yet to face a sword outside of the dojo. Unfortunately, many of today’s martial artists are more adept against a sword than against, say, an ax or a hatchet. Heaven forbid that we have to face any of these weapons but the latter two are more common in everyday use than a sword.

Many of us don’t live in the inner city or the ghettos of our cities, but these days you don’t have to go to where violence is. It will, too often, reach out and touch you, whether you seek it out or not. Because we may live in areas where personal assaults aren’t common doesn’t mean we should train as if they can’t happen to us. No one is exempt. If anything, the affluent are often targeted, simply because they have something that attracts a criminal’s attention. The average predator is intelligent enough to realize that you won’t get much from robbing the poor.

The problem with many of the classical martial arts is that they venerate the founder of the system to a point of being dogmatic. Something as inane as practicality isn’t enough to change antiquated techniques, no matter how impractical they may be. They do it that way because they’ve always done it that way, and their predecessors did it that way. Besides, that’s the way the founder did it two hundred years ago.

Let’s be realistic in our approach to our martial systems, whether they are a do, as in judo or aikido or a jitsu system. If it doesn’t work, discard it. If it works, consider including it. If you just want to play at fighting, then do it the same old way. Just be realistic enough to know that your techniques won’t work on the streets. I’m sorry, but I have to tell you; flying kicks were designed to dismount attackers from their mounts, not to kick an opponent in the head. Be real with your techniques. And speaking of kicks to the head; you aren’t going to bend down to punch a standing opponent in the foot, so why would you try to kick him in the head? Does that make sense? Your kick may be fast but it would be faster to the knee than to the head, simply because the knee is closer and it takes less time to reach. Using the closest weapon to the target is only common sense.

Some traditional things should be discarded but some are worth keeping. Others that have been shunned because of faulty information should be considered. A makawari pad builds kime (focus) and penetration, as well as conditioning the hands. You might not want to fashion your hands into lumps of stone but if you’re going to fight barehanded and if your system include fist attacks, you would do well to prepare your hands for the impact that they will have to endure. It’s hard to fight with a broken hand. The makawari is excellent for that.

A heavy bag is good for impact training. Speed bags and double ended speed bags are essential for coordination and timing. You can’t just punch the air and become a proficient fighter. No boxer became good just by shadow boxing. Punching the air builds speed and some of it is necessary, but too much is hard on the connective tissue of the elbow and shoulders. I know that much of a striker or kicker’s power comes from speed and focus, but some strength is essential if a fighter wants to be effective. Weight training, or some other type of strength training is a must for any serious fighter. Effective combat requires some measure of strength and athleticism. We can’t always depend on facing an untrained opponent in the streets.

Some type of training with an uncooperative partner is necessary to develop fighting skill. Sparring is good for what it is, but, aside from building timing or reaction time, it is unrealistic for teaching self defense. Unless someone comes up with competition eye gouging, sparring will not teach realistic combat. Street predators don’t play by rules. You can’t either.

Some type of stress training is also necessary. All of our fancy techniques won’t work, no matter how many times we’ve done them if they haven’t been practiced under realistic conditions. And speaking of fancy techniques, if you wish to have any success in a violent encounter, leave them in the dojo. Under the extreme stress of a real fight, and the resulting adrenaline overload, they probably won’t work. When adrenaline level and heart rate go up, coordination tends to go out the window. You may want to stick with techniques that involve gross motor movement and are as natural as possible. It’s interesting to be able to train our bodies to do fabulous and unusual things but can you do them in the streets? If you can’t, and believe me, if it’s too unnatural, you probably won’t be able to, leave them in the dojo.

If you want to train in a realistic fighting system, you have to train realistically. Tradition won’t help you in a fight. The founder of your particular system may not recognize the evolution of his original system, but back in the day, these arts were designed for fighting, not for sport or competition. Being effective in a fighting art was the difference between life and death. He may not recognize the art that he originally created but I’m sure he would approve of the changes that would keep it practical.

Getting back to my original question, do you practice a realistic fighting system? A martial system is designed for combat. There is karate do which is an art. An art exists for ascetic reasons, not for practical application. There is karate sho, which is a style developed for sport or spectator appeal. And then there is karate jitsu, which is a real fighting or self defense system. One may have some of the aspects of the other, but realistically speaking, they are not interchangeable. Whatever your system, it’s imperative to know what you are training for and not to mistake it as being street effective if it isn’t. Such a mistake can cost you your life.

There’s nothing wrong with training in an ascetic art or a sport, but just be honest and realistic in what you ask of your art. If you require a combat effective art you must realize that fighting skills don’t happen by accident. Yes, the speed, coordination, balance, timing and athleticism you’ve developed from your training will serve to help you in an encounter, but training in basketball, football or some other such sport, offers the same type of benefits. Like sports oriented martial arts, they won’t translate into success in a serious street encounter or self defense situation. You will fight how you train. In the end, if you want to be able to fight, you have to train to fight. You will have to have skill, ability and total commitment to survive a real life and death struggle. These qualities come through deliberate, realistic, training.

So, now, with all of that being said, let me ask you the same question I started this discussion with. What do you study, a do or jitsu. The answer to that question can, one day, save your life.

Train honestly, my brothers and go with God.