When you learn self-defense in a controlled environment you are practicing against fellow practitioners who are sober. Before the training session your opponents have not been drinking alcohol or are under the influence of a controlled substance. Yet, in most violent crimes approximately 70% of the acts are committed while the attacker is under the influence of a mind-altering substance and this the drug factor.

The general consensus among the law enforcement community is that if alcohol and illegal drugs were to suddenly disappear from the face of the Earth crime would drop by 70%. Simply put, 70% all crime has a drug connection of one form or another. Fights in bars and nightclubs are generally started due to the over indulgence of alcohol; not to mention the thousands who are killed every year by drunk drivers. Most burglaries are committed in order to pay for the user’s illegal drug habit, and most gang related shootings are over drug turf wars. Unfortunately, alcohol and illegal drugs will never disappear. Ancient Egyptian papyrus manuscripts even describe their own version of the war on drugs. This problem has been around for a very long time.

As a practitioner learning the martial artist you have to realize that you may have to defend yourself against someone who is not a rational thinking human being, but someone under the influence of a controlled substance. The type of substance your enemy has ingested or injected, and the amount in their bloodstream, will determine their actions against you.

As a police officer I have dealt with literally thousands of people under the influence whether questioning them, fighting with them, or arresting them. As such I am familiar with the tell tale signs of many controlled substances. This subject is virtually ignored by most traditional-based and sport-based martial arts instructors, and why I will educate you on what you should watch out for in real situations and to make your training more reality-based.

The beginning physical symptoms of alcohol include either relaxation or increased irritation. Intoxication includes slurred speech, unsteady walk, impaired coordination and slowed reflexes. To detect alcohol consumption you may smell alcohol on the clothes or breath, loud speech, intoxicated behavior, with glazed, dilated, or bloodshot eyes. A nickname of alcohol is “liquid courage.” For many people the effects of alcohol make then either say stupid things that end up getting them into fights, or the alcohol takes over and they want to fight with others; people they might not otherwise challenge if they were sober.

The physical symptoms of cocaine include elevated blood pressure and heart rate, restlessness, excitement, mood elevation. To detect cocaine usage the person may be very paranoid, hyperactive, and possibly hallucinating. The pupils of the eyes will be smaller than normal. Habitual users are usually very skinny with poor skin color and rotting teeth due to the acidic properties of the substance. 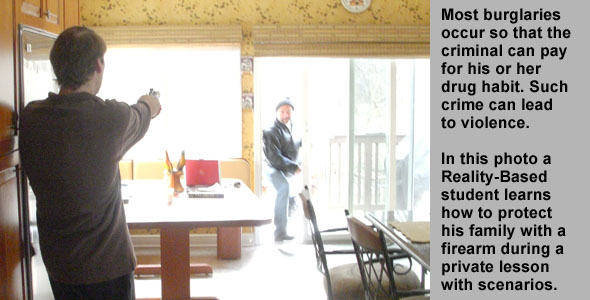 The physical symptoms of hallucinogens include high anxiety, panic, and nausea. Their eyes seem to look through you or past you. The user will have unpredictable behavior and can be extremely violent with superhuman strength. In their mind they may see you as a demon or monster that must be destroyed due to the hallucinations.

The physical symptoms of narcotics range from everything to euphoria, drowsiness, insensitivity to pain, to nausea depending on when the drug entered the system. To detect narcotics usages look for watery eyes with pinpoint pupils, runny nose, and cold moist skin. If the suspect is wearing short sleeves you may be able to see “track marks” (purple scared circular marks along vein routes). Most people who are coming down from a narcotic, especially heroin, become physically sick and feel like they are dying. They will do almost anything to get the money necessary to buy their next fit, and thus at this stage they are extremely violent.

Usually consumed by teenagers the physical symptoms of inhalants can be confused with alcohol intoxication because the symptoms are similar: nausea, dizziness, lack of coordination and body control. However, you may be able narrow it down the behavior to an inhalant by the chemical smell on the clothing or on the breath.

Like alcohol intoxication the physical symptoms of depressants are slurred speech, drowsiness and uncoordinated movements. However, the person may be experiencing depressed breathing. The problem with depressants is that many times the users can become suicidal. As every police patrol officer knows, Suicidal is often homicidal. I had a man under the influence of a depressant try to stab me because he was suicidal. He wanted to die by “suicide by cop,” hoping that me, or my partner, would shoot and kill him.

You need not worry about heavy coffee drinkers or smokers, but drugs such as methamphetamine is bad news. The physical symptoms of this drug are increased blood pressure, mood elevation, paranoia, depression, and possible hallucinations. Heavy users of “meth” are very sickly looking often times with open sores on their hands and arms and grey rotting teeth. Generally most users are under 30 years old since addicts generally have short life spans.

Most of your training should be scenario training; setting up realistic conflict scenarios that incorporate good acting, scenery, costumes and props. To make your training even more reality-based you can have your actor attacker simulate being under the influence of one of the substances that we have looked at.

The Right Response to a Ground Attack