People who’ve played baseball, and who now walk up to the plate in life, know how hard it is to hit the ball and reach first base, much less be allowed to touch each bag and make it safely home. Most people just stand there and meekly swing at the curves in life as they wait for some perfect pitch. When it doesn’t come, and if they never hit one of those curves, there’s still a chance that one of the curves might hit them. Then, they’ll get a chance to get on base and see if they can make it all the way home.

I’ve always been eager to step up to the plate no matter how many outs there are, or how tough the other team is, and no matter who from Hell is pitching.

What a thought for me today.

To stand on first base with the thought of making it home is a thrilling thought. I’ve had many chances to stand right here with that thought in mind, but every time I head for home something happens that stops me cold.

As a matter of fact, the last time God was coaching behind third base I hit a long drive into the outfield. I knew I was suppose to watch for his signals as I ran the bases but as I rounded first base I took my eyes off God and saw that the ball was way out in left field. That’s when the challenge to make it home looked pretty easy and so I decided to make it on my own. I took my eyes off God and headed for second and wasn’t doing all that bad, either. 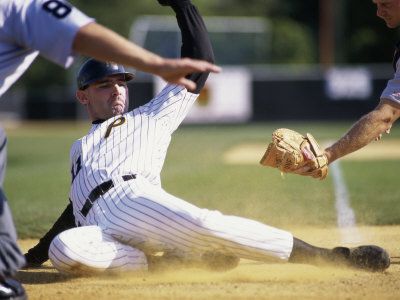 But, half way to second, I was bombarded with self doubts and a cold eerie feeling that I was all alone. I saw nothing but danger and confusion and I knew that I was missing something. I just didn’t know what it was. And no longer seeing and knowing exactly where the ball was I got the feeling that something was about to catch me and tag me out.

I got scared and stopped.

I looked around and couldn’t decide what to do.

Then I turned and ran back and dove head first into the lowest point my life had ever reached. I was back on first base clutching a once discarded past as if it were the only safe and perfect place for me to be.

I knew it well.

When the dust cleared and I stood alone at my beginnings I couldn’t see anything that would have stopped me. There was nothing there; no hidden trap, no dangerous defense, not even a feeble challenge.

I couldn’t believe my eyes.

I expected life to be so hard, that when I found it wasn’t, I did everything I could to make it harder than it ever had to be. Every time I thought I’d get caught off base I’d run back from where I came, immediately turn around, start over again, get half way home, think something’s wrong, and then return to the closest bag on which I felt safe.

And then when everyone started jumping up and down and yelling for me to run, I would take off for home again. I ducked, dodged, slid under, and jumped over every invisible and imaginary fear.

I didn’t make getting home hard.

I made it impossible.

Today, instead of waving me home God threw up His hands and called a ‘time out’.

He walked out to the bag I was standing on and asked, “Whatzup?”

He didn’t look very pleased but he remained calm when he said, “Look son, it’s time you match what you think you want against all that you think you have and then think again. I mean really think! Think about the so-called safety of this bag and how it feels to be a prisoner to it. Think about how badly you long to be off this course that takes you nowhere, and have it buried in the past, so you can move on. Why not consider the freedom that’s already yours, the freedom from self-doubts and insecurity, the freedom from feeling inadequate, unloved and unwanted, and the freedom from worry and fear it’s all waiting for you if you would only trust Me and come on home. We’re all waiting for you. So come on… make it home this time”

Then God took a few steps backward as if he were getting ready to turn and run back to the third base line, but before he did he pointed to me and added, “Oh yes; the real key to making it home is this: keep your eyes on me.”

As he was running back to take his position behind third base I did what he said; I thought about what I wanted in life. And I matched what I wanted with what I had, and saw how far my life fell short from achieving my goals.

I couldn’t understand it.

I thought real hard, not about his will, about his plan. And, it became clear to me that when I stay focused on God, his thoughts become mine. And, it’s when I listen and react to a world without God, that I get off track.

“No one can know what anyone else is really thinking except that person alone, and no one can know God’s thoughts except God’s own Spirit. And God has actually given us his Spirit, so we can know the wonderful things God has so freely given us … we can understand these things for we have the mind of Christ” 1 Cor 2:11-16

It’s not that he doesn’t want me to have an abundant life it’s that I’ve been trying to get it without following his plan. I say I’m following his plan but, as soon as he gets me started, I take my eyes off God and try to run the show myself.

Wow… I’ve been off base for such a long time. I’m surprised I haven’t been tagged out already. When God had his talk with me today I remembered something he told me once. He said, “You know there’s a right way and a wrong way to do everything. But there’s also a right way and a wrong way to do the right thing? There’s a lot of people who try to do the right thing but go about it the wrong way. And all the benefit, it could have had, is lost.” As I thought about those words it became clear to me that if hitting a home run would cause me to take my eyes off of God, it would be better for me to bunt or even strike out. Because all things work together for the good of those who love Christ and are called according to his word.

I smiled, I finally understood what God meant when he says homeward bound. When God talked to me today I realized that it’s not in my power to complete the journey home, and that I will never get there without him. Because you see ‘home’ is God and without God there is no home for us to go.

As these thoughts came to me I saw the short stop move in closer to home plate and the second baseman setting up for a double play. And I figured that if I got a good jump on the pitcher, and stole second base, their hopes of a double play would die. I played myself way off the bag and started inching further and further away. I was poised ready to run for second when all of a sudden the pitcher whirled and threw the ball to the first baseman. I dove back towards the base and reached through his legs and felt the canvas bag at the same time I felt the thud of his glove on my back. I held my breath until the dust cleared and discovered I barely made it. I was lucky to still be in the game.

Wow, I can’t believe it.

Even with this new commitment I try to turn away from God, all because of this voice inside my head that says, ” So what if I do go off track just a little bit? I made all of my own decisions in the past and I’m still in the game.”

Oh no; but, wait a minute, that wasn’t me speaking. It was some voice in my head talking in the first person pronoun and with a Georgian accent, but it wasn’t me.

That’s the way Satan has fooled me in the past. He’s been putting these thoughts into my head and making me believe it’s been my own thinking that says these things.

But not anymore, I’ve got a new Coach.

I looked over at God and saw that he forgave me, again, but this time it was as if he knew the lesson I just learned because when he smiled at me I felt a warmth, a love, a peace that passeth all understanding, and then I knew:

He wanted me, He accepted me, He really trusted me …

In a flash I heard the crack of the bat and before I could think another thought God was waving his arms and the crowd jumped to their feet and what a roar I heard as they began cheering. I exploded off the base and headed for second and this time instead of looking out in the field I looked to my left and saw God behind the third base line signaling for me to keep going. Without hesitation I rounded second and as I was coming into third base I saw, from the corner of my eye, the third baseman standing with his glove in the air as if he was getting ready to catch a ball. I thought I better take over here, maybe God doesn’t see what I see, and so I started to slide. But wait; I committed myself to keep my eyes on God. When I looked back at him I was shocked because God was waving His arms furiously … He was waving me home and that scared me.

And, so once again, I was tempted to doubt God and look away. I wanted to look to see where the ball was so that I could take over and make the decision myself. But God was waving me home. He must think I’m good enough to make it. He’s trusting me. No one’s ever trusted me like that before.

I kept my focus on God and obeyed His command as I rounded third base and headed for home. And even though the throw was coming all the way from left field and I was running as fast as I could God was yelling for me to slide.

And so I did, and after I slid, I stood, and I enjoyed the feel of my foot on home plate.

Then looking the reaper dead in the eye, I dusted myself off, and smiled.

And the umpire yelled …”SAAAAFE”

Oh what we could do if only we could trust god as much as He trusts us.

A Glimpse of Manhood