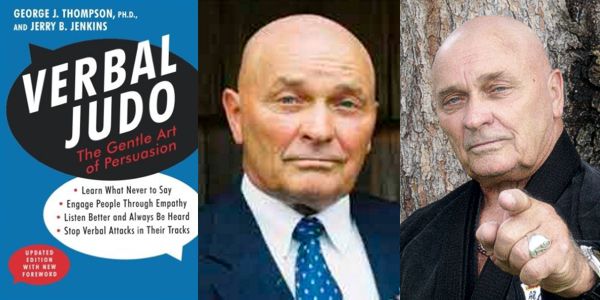 June 8, 2011 Auburn, NY. Dr. George Thompson, the English professor-turned-street-cop who ultimately taught one million professionals the art of verbally redirecting negative behavior, passed away June 7, 2011 at his home in Auburn, New York. He was 69.

Dr. Thompson, known as “Doc” to the legions of professionals trained in his methodology of Verbal Judo, developed his tactics by witnessing seasoned law enforcement professionals — whom he affectionately called “salty old dogs” — talk down violence and generate voluntary cooperation in real-time crisis situations.

Through his Verbal Judo Institute and, recently, under its new brand of Verbal Defense & Influence, Dr. Thompson led a legion of global trainers who taught these tactics to law enforcement within police forces large and small. Some of the larger organizations he taught include New York Police Department, Los Angeles Police Department and the Federal Bureau of Prisons.

Additionally, major hospitals, government institutions and corporations such as Southwest Airlines and IBM have been taught these techniques as a means to enhance professionalism and protect employees from verbal assault and physical violence.

In recent years, his methodology has expanded greatly to encompass deflection and de-escalation techniques that address harassment and bullying in all its forms.

Doc received his B.A. from Colgate University (1963), a Masters and Doctorate in English from the University of Connecticut (1972) and has completed post-doctoral work at Princeton University in Rhetoric and Persuasion (1979). He has written and published four books. One of them, “Verbal Judo: The Gentle Art of Persuasion,” which is scheduled to be republished in an updated edition in late 2012, has sold over 250,000 copies.

Dr. Thompson achieved a 2nd Dan in Judo; he often referred to his communications methodology as the “martial art of the mind and mouth.”

Widely published in magazines and periodicals, his training has been highlighted by every major network, as well as 48 Hours, Inside Edition, the Los Angeles Times, New York Post, Sacramento Bee and other publications.

His personal commitment to his methodology was always evident; Doc maintained an active speaking and training schedule, despite a throat condition that reduced his ability to speak for extended periods of time. A throat cancer survivor for many years, Doc had recently undergone treatment to enhance his breathing. He passed away unexpectedly.