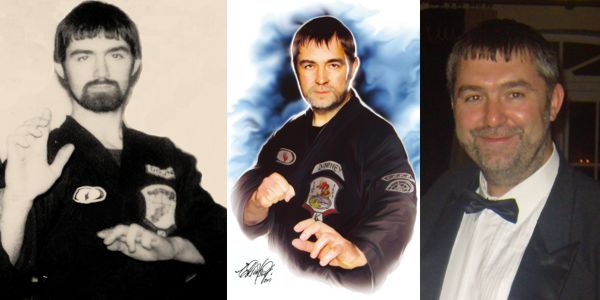 Eddie Downey later trained with Professor Maurice Mahon in Baggot Street, Dublin. Professor Mahon instilled in him strong basics, stances and fighting skills. Professor Mahon currently holds the rank of 10 th Degree Black Belt and has been an active leader of the Kenpo community in Ireland for the past forty five years.

In 1990 when Grand Master Parker suddenly passed on, Professor Eddie Downey requested Senior Professor John Sepulveda to become his Instructor and for the last twelve years Professor Sepulveda has visited Ireland on a regular basis to guide and train Professor Downey and his students in Kenpo. In 1992 Professor Downey tested for his 4th Degree Black Belt in Long Beach, California. In 1996 Professor Downey was honored to test for his 5th Degree Black Belt with the American Kenpo Senior Council board of examiners. The testing panel featured some of the worlds most respected Kenpo Masters listed below are the panel members:

In 1995 Professor Downey hosted an International Martial Arts training camp in Ireland and with Professor Sepulveda’s assistance the camp was able to host Professor Jeff Speakman as a camp Instructor. Mr. Downey came to know Mr. Speakman in 1987 through an introduction by Grand Master Ed Parker and was really excited at the opportunity to work with one of Grand Master Parker’s personal students. Mr. Speakman’s visit to Ireland was very successful and since then he has made regular visits to Ireland as a guest of Professor Downey.

Professor Downey has focused his Kenpo career on providing fair and honest leadership to his students and has worked tirelessly to learn and promote the Ed Parker Kenpo System with his member schools and students in Ireland. It has been a life long goal of Professor Downey to develop the Kenpo system in Ireland and Europe as envisaged by the late Grandmaster Ed Parker. He is the President and founder of the European Kenpo Karate Association (EKKA) and in this role he travels extensively throughout Europe teaching and promoting the Ed Parker Kenpo System.

Professor Downey is the European director for the American Kenpo Training System (AKTS) and has been a personal student of Master John Sepulveda for the past eighteen years. Professor Edward Downey is currently an 8th Degree Black Belt.

To contact Eddie Downey and Celbridge Kenpo Karate Academy visit their listing on the Martial Arts Schools and Businesses Directory by clicking on the image on the left.