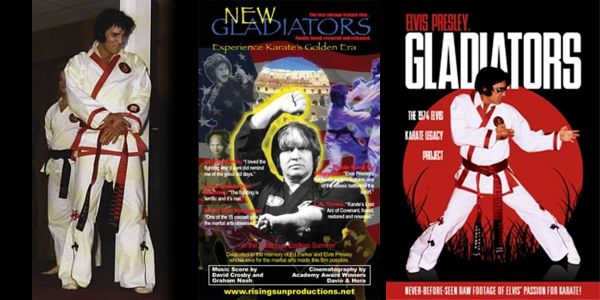 In Elvis Presley New Gladiators a group of the top karate fighters from the USA travel the country and globe in search of the perfect tournament and opponents.

A feature film financed by Elvis Presley found restored and released 30 years later. Music Score by David Crosby and Graham Nash. A film in the tradition of surfings Endless Summer a group of the top karate fighters from the USA travel the country and globe in search of the perfect tournament and opponents. Feature man fighting stars of the Golden Era of Karate in America the mid 1970’s. Great historical collector’s piece,

This story is so good, it sounds like a Hollywood story, which it is. For years there has been a rumor that Elvis Presley financed a feature length documentary on sport karate in the 1970s entitled, “The New Gladiators.”

American martial arts history books mentioned the film, but no one ever said they actually saw it. References indicated that it was an unfinished project that died with Elvis in 1977. Now, 25 years after the passing of Elvis Presley, the original 16mm film stock has been discovered and restored.

The “The New Gladiators” is a 93-minute documentary that chronicles the exploits of the U.S. Karate Team of Ron Marchini, Benny “The Jet” Urquidez, Darnell Garcia, Tom Kelly, and John Natividad. Additional fighters showcased in the film include Steve Saunders, Roy Kurban, Ed Parker, Ticky Donavan, Geert Lemmens and other American and European stars of the day.

This remarkable film is fully narrated and even has an original soundtrack by David Crosby and Graham Nash of Crosby, Stills, and Nash fame!